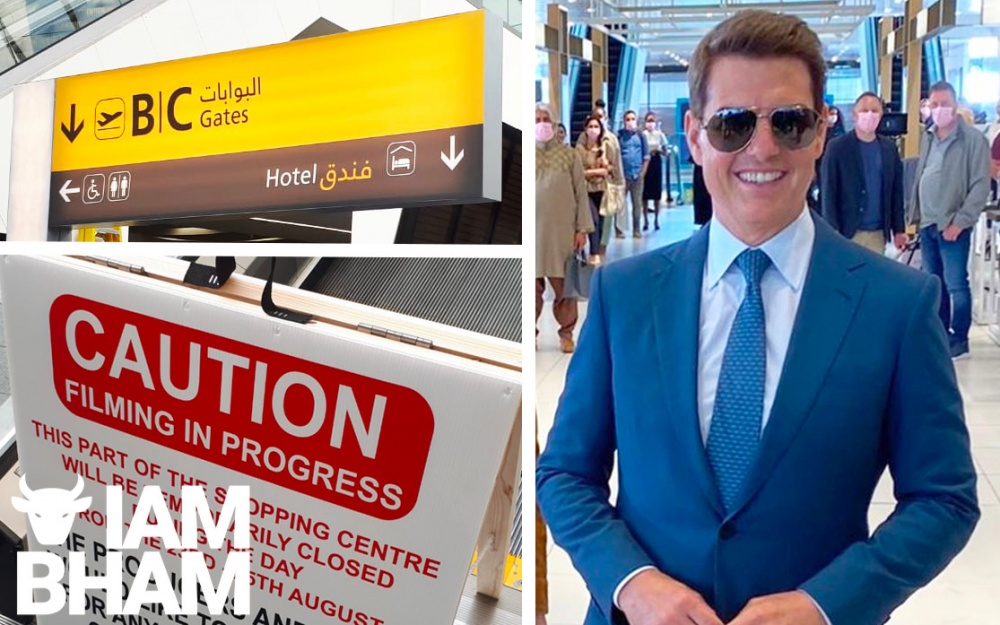 It’s been Tom Cruise mania in Birmingham this weekend as the Hollywood star continued on his mission (pun intended) to film his latest blockbuster at Grand Central and New Street Station in the city.

After being photographed outside Asha’s restaurant on Saturday, the tinseltown megastar spent much of yesterday filming scenes in and around the former John Lewis store in Grand Central, which has been decked out to double up as Abu Dhabi Airport, according to reports.

Fans were rushed past the filming area on Sunday (22 August) afternoon as much of the shopping centre remained open but not without grabbing several snaps of Tom Cruise and co-stay Hayley Atwell in action, some even managed to get the actors smiling and waving at them.

This morning, sound and visual trailers were still stationed outside New Street Station as filming for Mission Impossible 7 continues to get underway, but unlike yesterday, Grand Central was cordoned off very early this morning, according to Network Rail workers.

Speaking to I Am Birmingham, station staff said the film production crew set up cordons “bright and early”, sealing off public access to stairs and escalators towards Grand Central.

“They came in early and closed off upstairs, we’re not even allowed up there. We have to keep an eye out down here in the station while filming is being done but they should be wrapped up later this afternoon.

“Tom seems like a really nice chap, he was engaging with fans and public yesterday and some of them got some photos but we haven’t seen him yet today.”

While all escalators are off limits, those near Starbucks have been completely blacked out and are expected to be the location of an action scene involving Cruise, similar to where he and Atwell were spotted test filming only a week ago.

It is likely eagle-eyed passers-by will catch a quick glimpse of the 59-year-old actor when the blackout screens are briefly removed at some point today.

Parts of John Lewis and the Grand Central food hall have been transformed to resemble a Middle Eastern airport and lounge area with signs in Arabic, a large promotional poster of an Abu Dhabi mosque and a fake Dior store installed in the complex.

Anyone using New Street Station should note the main departure and arrival screens are only partly online, with those closest to the filming area showing ‘Special Notice’ messages. It’s possible these will later be used to display airport-style messages for filming purposes.

Similarly, the bright orange skin wraps running along the escalators have been temporarily removed as have several station signs that might give away the West Midlands location.

It is believed the area between the Bullring Link Street and the escalators near Joules outlet is the primary focus of filming within Grand Central but the final edited footage will reportedly aim to resemble a scene taking place in the United Arab Emirates.

Brummies have been in Tom Cruise frenzy mode for the last few weeks following initial sightings of the Top Gun star in the city.

On Saturday, July 31, Cruise was reportedly snapped at the Pho Vietnamese restaurant above New Street Station, where he was speaking to colleagues, leading to speculation surrounding filming plans in the building.

Employees working at Grand Central disclosed Mission Impossible filming would take place between August 24 and 26 at the vacant John Lewis unit and surrounding areas but management had allegedly signed non-disclosure agreements so details would around the plans would not be leaked.

Then last week, on August 15, Cruise was reportedly spotted a second time in Birmingham’s Grand Central – fuelling further rumours of Mission: Impossible 7 being filmed on site.

In one photo captured by Robert Poulton, the cinema legend appears to be standing near escalators by Costa cafe and appears to be shooting a test scene with fellow Mission Impossible star Hayley Atwell.

With limited and mostly unclear phone camera photos and footage being circulated of recent sightings, some were still unsure if Tom Cruise had really been in Birmingham or if a lookalike is doing the rounds.

However, Tom Cruise – or a stunt double – was reportedly snapped on the roof of New Street Station and Grand Central Birmingham last week (August 15) and yesterday morning (August 22), film studio lighting has once again been rigged up on the roof of the building.

On Friday (August 20), Cruise was in Derbyshire to film an action scene involving a steam locomotive crashing into a quarry. The scene was shot at Stoney Middleton, where teams had been building the set for months, with the black train plunging from a track on a cliff.

Then yesterday, it was confirmed by Asha’s Birmingham that Cruise had dined at their restaurant in Newhall Street on Saturday, ahead of filming at New Street Station when Brummie fans finally got a good look at the movie star in the flesh.

Tom Cruise has been confirmed to return in the 7th instalment of the Mission Impossible movie franchise alongside actors Ving Rhames, Simon Pegg, Rebecca Ferguson, Hayley Atwell, Esai Morales and Vanessa Kirby. The sequel is scheduled to be released in the US on May 7, 2022.