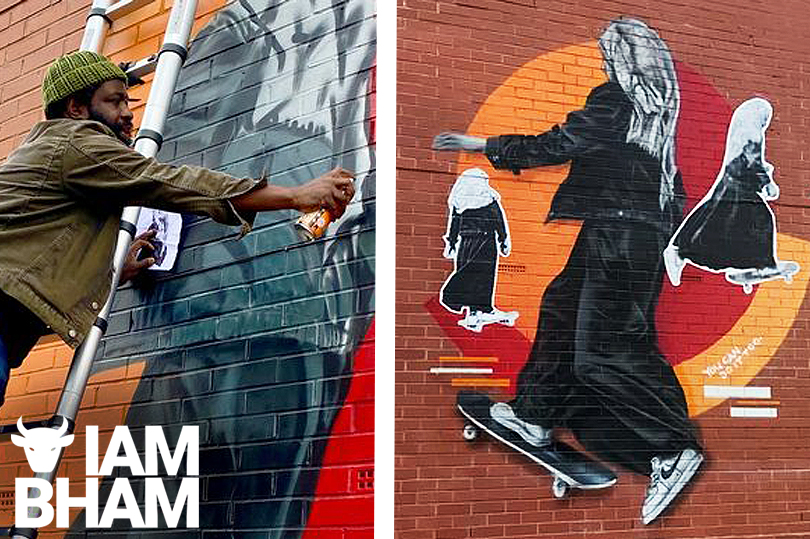 A mural depicting a Muslim girl skateboarding is inspiring residents in Lozells, Birmingham

A mural depicting a Muslim girl riding a skateboard has stunned Birmingham residents who have praised the artwork for its bold approach to inclusivity.

The street art has been created by talented graffiti guru Bunny Bread and is part of a series of murals which aim to engage local residents in Lozells through an interactive public arts trail.

The stunning art is part of a series of outdoor wall paintings which can be discovered by residents at ‘secret locations’ using their own unique QR codes which can be scanned on smartphones and similar digital devices.

Upon scanning, they will be able to access an animated website trail , which will allow visitors to find out more about each mural and the story behind the image. There are expected to be 10 different murals dotted around the neighbourhood by October.

Artist Bunny, who is also an established DJ and designer, collaborated on the community arts project with Jason Caballero and Simone Linton; who form creative group ‘Create Not Destroy’.

The artist based his striking work on a young Muslim girl he saw skating in Georges Park while he was working on another project and gained permission to use her likeness.

“While I was painting this piece I’m sure I spent as much time having great conversations with the community as I did painting it, and I think I convinced some elderly folk to start drawing,” Bunny told I Am Birmingham.

“The mural of the ‘Muslim Girl on the Skateboard’ is a symbol of ‘go and give it a try’.”

Create Not Destroy’s brief focuses on DOWNLOW, an initiative aiming to reinvigorate the Lozells community post-lockdown by connecting with local residents, families, businesses, places of worship and schools.

The collective have been commissioned as part of Gallery37, a three-year creative development programme investing in north Birmingham and its young artists through masterclasses, hyper local commissions, residencies and workshops.

Funded by Arts Council England, the project is being led by social empowerment hub Saathi House in partnership with creative and community organisations across the city including Canal and River Trust, Birchfield Big Local, Erdington Arts Forum, Active Communities and Punch.

According to Gallery37 producers, the programme is “bridging multiple locations through participatory creative activities and social action” and will “kickstart the creation of up to twenty new public artworks”.

Mashkura Begum, chair of Saathi House, said: “Creating public artworks that are local and accessible to our communities is incredibly important in north Birmingham, especially in areas such as Lozells, Handsworth, Perry Barr, Erdington and Aston.

“To this end, we want to ensure we work with talented artists from these communities to produce engaging art that reflects the stories and experiences of residents in these neighbourhoods. We want this to be their opportunity, their space and essentially a representation of their voice, which often gets missed in the sphere of celebrated public art in this city.

“What Bunny Bread and his fellow artists are doing here is dynamic and exceptional, the impact of their work will transcend its original purpose. Saathi House has worked to empower Muslim women struggling with access to active and artistic opportunities for over 40 years and we continue to do so.

“When we take them to see this mural, it will inspire them and other women in ways that will have a lasting impact. This is why this project is so important.”

As part of Birmingham’s Gallery37 creative development project, Saathi House is also planning to create a mural to celebrate local residents outside their community hub in Aston, with support from Aston Villa Football Club.

Lozells councillor Waseem Zaffar, cabinet member for transport and the environment, told I Am Birmingham: “I was awestruck by the amazing work from Bunny Bread and his creative team.

“The mural they’ve created represents one of many untold stories from the community of Lozells and not only will all of these public artworks positively engage local residents but they will unite the diverse communities of Lozells, using arts as a vehicle for change.

“I’m very excited about the Downlow project and can’t wait to see all of the completed murals.”

All of the Gallery37 DOWNLOW murals will be showcased at Georges Park in Lozells at 1pm on October 23.