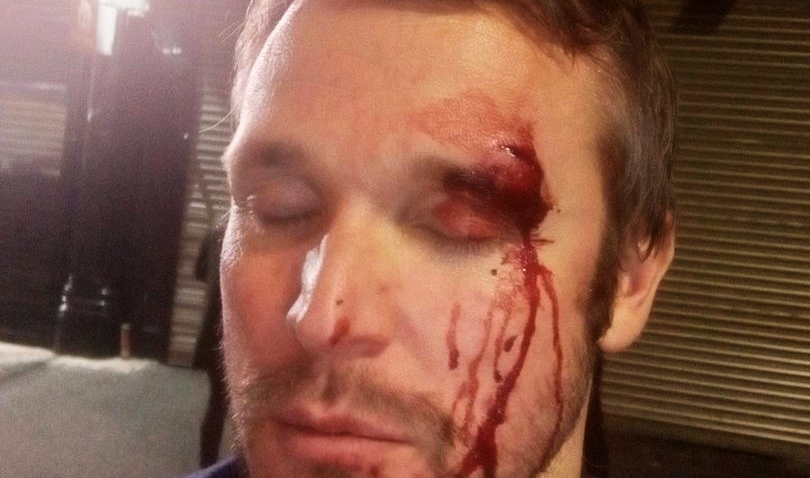 A student from Moseley was left with blood pouring down his face after suffering a savage homophobic attack which took place in Birmingham’s Gay Village on Sunday (October 10).

The victim was walking along Holloway Circus in the early hours of Sunday morning when he was attacked by a thug with a glass bottle and an iron bar which left the poor victim covered in blood.

A police investigation has been launched into an violent homophobic attack, described by police as “abhorrent”, in Birmingham’s Gay Village on Sunday (October 10) in which a student, from the Moseley area of the city, was viciously struck with a glass bottle and whacked with an iron bar.

John-Paul Kesseler, 38-years-old, said he was targeted by a homophobic thug for “holding hands with another man” while walking along Holloway Circus in the early hours of the morning on his way back to a hotel after a night out in the city.

Mr Kesseler said: “We had all been to the Gay Village and were walking towards Holloway Circus. I was going to a hotel with a close friend and we were holding hands, walking towards the Pagoda.

The callous attacker jumped into his after the appalling hate crime and fled the scene.

West Midlands Police took a statement from the victim and a senior officer, Superintendent James Littlehales, met with him to hear what happened and offer reassurance in light of some similarly violent assaults in the Gay Village recently.

Supt Littlehales said: “This is an abhorrent attack on a man enjoying a night out. The victim has taken to social media to say he should feel safe when out socialising. He’s absolutely right… this sort of offence is totally unacceptable.

“We’re making rapid progress with the investigation and hope to bring news of an arrest soon. Anyone who commits such offences must understand we take it extremely seriously and that they face time in prison.

“Hate crime and keeping people safe in our nightlife centres are priorities for us.

“Everyone should feel safe and comfortable to be who they are, we will not tolerate people being targeted in this way.”

Police have identified a suspect in connection to the despicable hate crime and arrest attempts are ongoing to bring the man into custody for questioning.

(Visited 179 times, 1 visits today)
https://www.iambirmingham.co.uk/2021/10/12/student-attacked-glass-bottle-iron-bar-vile-homophobic-crime-brum/https://www.iambirmingham.co.uk/wp-content/uploads/2021/10/John-Paul-Kesseler2-800x472.pnghttps://www.iambirmingham.co.uk/wp-content/uploads/2021/10/John-Paul-Kesseler2-300x177.png2021-10-12T21:09:55+00:00Rangzeb HussainCrimeLGBT+NewsAndy Street,Assault,Attack,B'ham,Birmingham,Birmingham Gay Village,Birmingham Pride,Brum,Brummies,Crime,England,Hate Crime,Holloway Circus,Homophobia,I Am Bham,I Am Birmingham,Investigation,John-Paul Kesseler,LGBT,LGBTQ,Midlands,news,Police,Queen Elizabeth Hospital,Rangzeb Hussain,Superintendent James Littlehales,UK,West Midlands,West Midlands Police,WMPA student from Moseley was left with blood pouring down his face after suffering a savage homophobic attack which took place in Birmingham’s Gay Village on Sunday (October 10). The victim was walking along Holloway Circus in the early hours of Sunday morning when he was attacked by a thug...Rangzeb HussainRangzeb Hussain[email protected]AuthorI Am Birmingham
« REVIEW: Punks & Goths – a beautiful zine about acceptance, freedom and individuality
Protest against LGBTQ hate to be held in Birmingham following homophobic attacks in city »