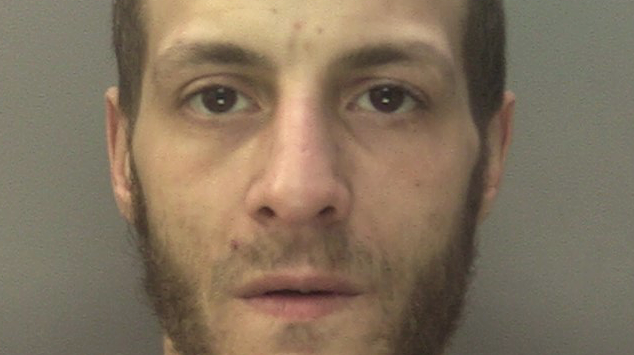 A dangerous burglar who preyed on pensioners – threatening one with a knife and breaking another victim’s shoulder – has been jailed after he was linked to a series of violent break-ins in Shard End, Hodge Hill and Edgbaston.

Clinton Copeland, 36, targeted addresses with wheelchair ramps or handrails in his wave of terror against elderly and vulnerable people in Birmingham which left victims traumatised and injured, with one victim unable to speak for days following her ordeals at the hands of Copeland.

A sadistic and cowardly burglar who targeted elderly and vulnerable people in January and February 2021 has finally been apprehended and jailed for his series of violent crimes described as “nasty” by police. Some of the victims were in their 80s and the shocking assaults by the burglar left his victims with physical and psychological scars.

Speaking about the wave of burglaries a spokesperson for West Midlands Police said: “We don’t underestimate the devastating impact burglary can have on people. It’s not just property stolen, it’s the psychological impact of knowing someone has been in your house where you should feel safe.

“Copeland’s tactic was to knock on doors and use any excuse he could think of to get inside. He would claim to be a maintenance worker, had been sent by a neighbour or even that he needed a phone charger.”

Clinton Copeland’s brutal wave of terror includes a burglary on the morning of 2nd January this year when an 85-year-old woman was awoken in bed at her Hodge Hill home by Copeland shining a torchlight in her face.

He threatened her with a screwdriver before stealing two purses, cash and two rings. The woman was so traumatised by the horrific ordeal at the hands of Copeland that she was unable to speak for several days afterwards.

On 29th January, Copeland barged his way inside a woman’s home in Shard End claiming he needed to use a phone charger. He shoved and knocked down the 79-year-old victim and tried yanking off the rings on her fingers. Copeland locked the front door while he rummaged through the house for valuables.

The victim said she “feared for her life” and managed to sneak through the garage door as the violent thug ransacked her house. The poor woman ran into the street barefoot to raise the alarm before going to hospital suffering high blood pressure and shock.

On Valentine’s Day this year Copeland split open the head of an 86-year-old man by hitting him with a picture frame as he forced entry into the victim’s home in Edgbaston.

The violent criminal searched through the elderly man’s pockets as he lay injured on the floor and made off with £400 cash having rifled through drawers. The poor victim also suffered a broken shoulder during the violent burglary.

Three days later he threatened a 77-year-old man with a flick knife having broken into his Edgbaston home. Callous Copeland – a Class A drug addict of no fixed address – stole engagement and wedding rings belonging to the victim’s late wife, plus a watch collection.

Police carried out ten arrest attempts on the hunt for Copeland before tracking him down at an address in Bloxwich, Walsall, on 18 February. The coward was found hiding in a toilet.

The thug showed no remorse for his crimes and during his interview at the police station he even threatened the investigating police officer.

He went on to admit five burglaries, one attempted break-in, two robberies and two thefts and also asked for another 18 burglaries to be taken into consideration.

Investigating officer, DC Karen Kirman, described Copeland as one of the most dangerous, heartless offenders she’s encountered during her 28-year police career.

She said: “He used various excuses to try and get into people’s homes… and if he was refused entry he forced his way inside.

“He stole money – some being saved for a funeral – plus sentimental jewellery. Some of the victims are still suffering from the psychological damage caused by Copeland.

“He was horrible in interview, threatened me, and showed no remorse for his victims. He even said he didn’t give a damn if they were hurt or if they died.

“He is one of the worst offenders I’ve ever dealt with and has rightly been classified as a dangerous offender by the courts. That means he’ll be subjected to an extended five-year licence period on his eventual prison release.”

At Birmingham Crown Court on 28th October Clinton Copeland was jailed for a total of 12 years for his crimes.