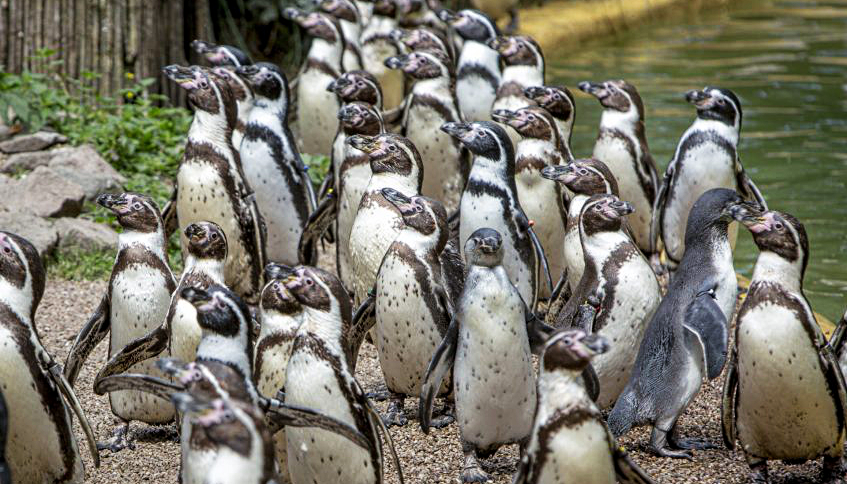 The vast majority of penguins at Dudley Zoo have died after an outbreak of avian malaria (Photo: Dudley Zoo and Castle)

The vast majority of penguins at Dudley Zoo in the Black Country have died after a severe outbreak of avian malaria.

Sadly, only 19 penguins remain alive from a colony of 69 birds at Dudley Zoo which has been operating a successful breeding program for decades.

Dudley Zoo has been stricken with a severe outbreak of avian malaria which has wiped out most of the much-loved Humboldt penguins. The zoo has been breeding this species of penguin for 30 years and boasts one of the largest self-sustained colonies in the country.

The zoo revealed that around 50 penguins have sadly succumbed to the fatal avian disease and only a handful have thus far survived. This is the first time the penguins have suffered a catastrophe on this scale.

The director of the zoo, Derek Grove, stated that “occurrences like this are rare” and in over three decades “we’ve never experienced anything like it”.

The staff at Dudley Zoo have been deeply saddened and heartbroken by the loss of the birds.

Mr Grove thanked the bird team for their care and devotion during the avian malaria outbreak: “They’ve provided round-the-clock care to individually treat the birds in their fight to save as many as possible and we thank them for their determination.

“Having consulted with avian experts and animal collections around the world, we know we’ve done all we can.

“Their dedication and tireless efforts to care for our penguins over recent weeks has been exemplary.”

Dudley Zoo has been breeding the popular penguins for a number of decades. The penguin colony began with only five chicks – hand-reared – and from that humble beginning the colony grew to became one of the largest collection of Humboldt penguins in the United Kingdom.

Some of the penguins from the Dudley Zoo colony helped to boost and sustain other penguin collections around the country.

A spokesperson for Dudley Zoo stated that avian malaria is caused by a parasite which is spread by infected mosquitoes. Penguins do not have a resistance to the disease and can die from it.

“Unfortunately, penguins are particularly susceptible to the disease as they do not have natural resistance against it and it’s also not easily identifiable through medical tests,” added Mr Grove.

There is also some concern that climate change has had a negative impact and played a role in the decimation of the penguins.

Mr Grove said: “We do not know if last year’s unusual weather pattern has played a part, with wet and muggy weather not only impacting the penguin’s moulting season, but also increasing the risk of mosquitos.”

Dudley Zoo stressed this strain of avian malaria is not fatal to humans.