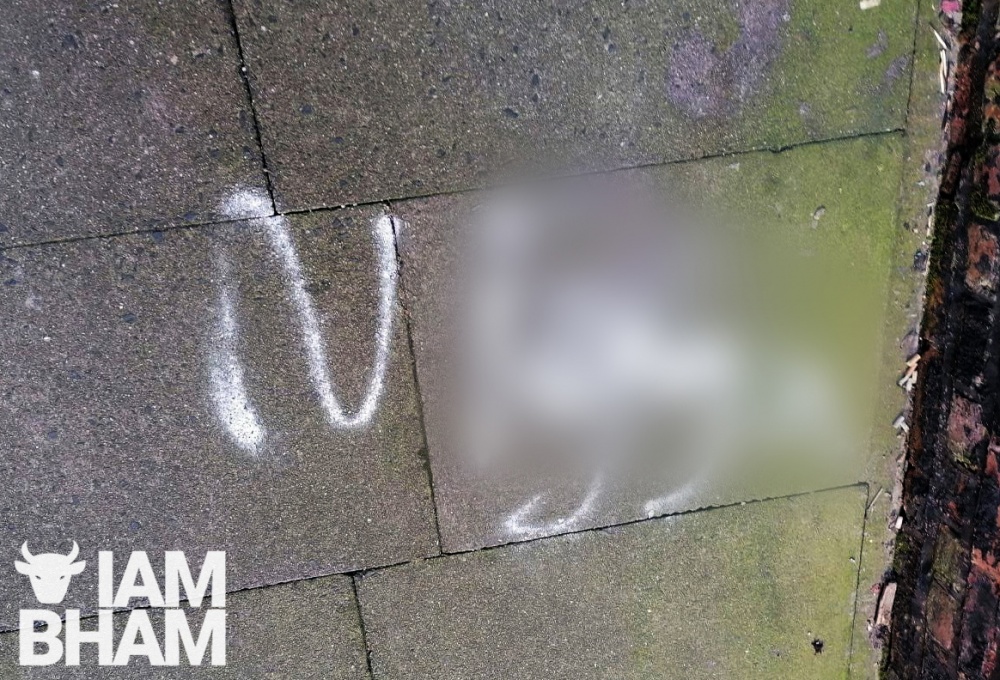 Anti-Black racist graffiti has been daubed on a street in Small Heath, Birmingham (Photo: Rangzeb Hussain)

Local residents have been left horrified after shocking racist slurs were discovered painted across a public walkway in the Small Heath area of Birmingham.

The abhorrent graffiti – which includes the notoriously anti-Black racist term “n*****” along with offensive expletives – was scrawled along a public passage connecting Kenelm Road and Somerville Road.

A local resident, who wishes to remain anonymous, told I Am Birmingham she noticed the appalling racially charged vandalism as she walked through the passageway on her way to the shops in Coventry Road on Friday (4 February).

The woman, who lives near the site of the vandalised pathway, spoke of her disgust when she saw the racist graffiti: “I was taking a short cut to Coventry Road through the alleyway that runs between Kenelm Road and Somerville Road. Just as I entered the alley, from the Kenelm Road end, I saw large white letters sprayed on the floor in front of me.

“You can’t miss seeing the painful and degrading words. They’re so nasty and racist that I’m sick to my core when I think about them.

“This public passage is used by local families, including children on their way to the mosque and local primary school, and it’s really disturbing that they should be exposed to these derogatory words.

“The bigot who did this shameful thing should be exposed and arrested.

The offensive graffiti is accompanied by a crudely painted hand flipping its middle finger along with the profanity “F*** you”, followed by the obscene “N*****” slur directly underneath.

Angry residents have vowed to report the unsightly vandalism to Birmingham City Council to have it removed, and to West Midlands Police to log as a hate crime.

Graffiti with a hate crime marker has been sporadic over the last 8 years with no discernible pattern of increase or decrease, according to data released following a Freedom of Information request in March 2019.

Despite these numbers, it is highly probable many cases of hate crime graffiti – which would include sexist and homophobic incidents – go unreported and therefore unlogged or dealt with.

In a statement accompanying the statistics, West Midlands Police stated the “data should be interpreted with caution. Comparing numbers of incidents/crimes can be misleading and does not necessarily indicate the likelihood of someone being a victim of crime.

“In addition, the number of incidents/crimes recorded in an area over a period of time can be influenced by a number of factors. Consequently statistics on incidents/crimes for one period may not necessarily be a good indicator of future incidents in that area.”

This is not the first time hate crime of this type has been committed in the predominately Muslim neighbourhood of Small Heath. Residents in the area have previously been left dismayed and deeply hurt when racist graffiti spelling “P*** Pedo C***” was daubed across several prominent locations in the ward, including the entrance to Small Heath Park.

The incident, in March 2018, outraged residents who grabbed their own paint cans and took it upon themselves to immediately cover up the vile messages.

Similarly, in the very same month, anti-Muslim statements were spray-painted on a wall outside a fish bar and on a bus stop, both in Yardley.

Police launched an investigation into the Islamophobic vandalism, which appeared on Chris and Lucia’s Fish Bar on Hob Moor Road and on a bus stop on Heybarnes Road.

In July 2020, a group of local women joined forces to remove antisemitic graffiti which appeared overnight on a wall in Billesley in Birmingham, transforming it into positive art depicting a rainbow instead.

In most of the above cases, Birmingham City Council reacted swiftly, removing the obscene writing within 24 hours. Outlined in official guidance from the council, hate crime graffiti is top priority for their clean-up teams.

“Graffiti is illegal and can significantly increase people’s fears of crime and violence.

“We remove graffiti from subways and recycling sites around Birmingham as quickly as possible. If the graffiti is racist or offensive we aim to remove it within 1 working day.

“We will remove graffiti from your home for free providing it is below eye level.”

According to the West Midlands Police website, a hate crime is defined as “any criminal offence which is perceived by the victim or any other person, to be motivated by hostility or prejudice towards a person based on their race, religion, sexual orientation, disability, or gender identity.”

If you are a victim of hate crime or would like to report hate crime in Birmingham, please contact West Midlands Police on 101, or visit: www.west-midlands.police.uk/your-options/hate-crime.