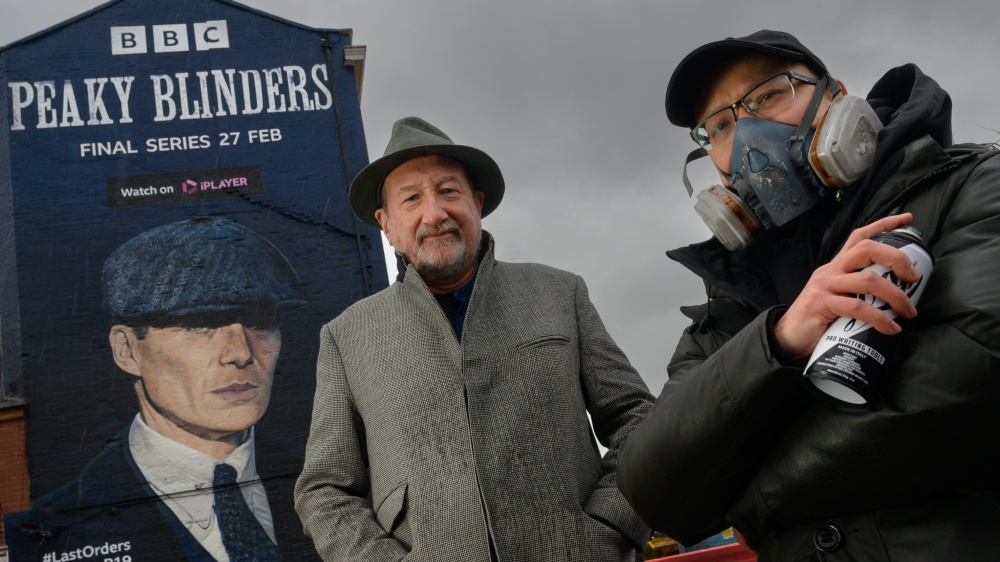 The broadcast date for the final series of landmark Birmingham-based drama series Peaky Blinders was announced during the unveiling of an epic new mural in Digbeth today.

Show creator Steven Knight and showbiz street artist Akse were in Birmingham this morning (15 February) to unveil the Peaky Blinders mural and announce the launch date for season six of the hit BBC drama series.

On an overcast and wet Tuesday morning, in freezing temperatures, Peaky Blinders writer Steven Knight and street artist Akse braved the elements to unveil a monumental mural in Digbeth Court ahead of the broadcast of the new season of the hugely popular television series.

British period crime drama Peaky Blinders follows the trials and tribulations of the criminal Shelby family from the Small Heath area of Birmingham after the end of World War I.

For its final season, the show returns with faces old and new; with leads Cillian Murphy, Paul Anderson, Sophie Rundle and Ned Dennehy forming part of the stellar cast.

Excitement and anticipation is high for the new series as season five left viewers on a huge cliffhanger, after Peaky Blinders leader Tommy Shelby – played by Cillian Murphy – pointed a gun at his head after having visions of his late wife Grace.

Promoting the upcoming series, the gigantic mural measures 42ft in height and is painted on the side of a building in Digbeth Court near The Old Crown pub.

The larger-than-life artwork was commissioned by the BBC to both celebrate and herald the broadcast date of the highly anticipated show which comes to a close after nine years since the first episode was aired.

The portrait stands out for its photo-realistic likeness as the atmospheric art exudes mystique and a sense of something unsettling simmering within the intense eyes of the criminal gangster boss.

Speaking to I Am Birmingham, Akse revealed it was absolutely imperative that he painted the eyes of Tommy Shelby in such a way that any fan of the show gazing up at the mural would instantly recognise the iconic character.

The depiction of Tommy Shelby by artist Akse is so memorable and brooding that the viewer is made to pause for a moment and ponder upon the situation and narrative flow of the mural. The blue-black film noir shadows cascading across the mural conjure up unease and suspense.

Avoiding a need to push the series through common mafia-style tropes, Akse dispenses with weapons of any kind for the Peaky Blinders mural, instead opting to visually weaponise the volcanic energy bubbling in the eyes of Tommy Shelby.

The mural is richly detailed by Akse, who paints the fabric of the iconic Peaky Blinder cap with such vivid detail that the viewer can almost reach in and feel the textures. The suit worn by Tommy Shelby seems to ripple in the wind, and the shirt has natural creases while a richly textured tie is held in place by a collar pin.

The use of subtlety and stillness in the work generates a simmering energy which engages and ignites the imagination of passers-by, with patterns, colours, shadows and tones all weaving together to conjure up a haunting portrait of the charismatic central character.

Unsurprisingly, Akse revealed he is a fan of the Peaky Blinders and his favourite character is Tommy Shelby. He spoke about the challenges of painting in unsettled weather on a craggy surface but he enjoyed the experience and hopes the mural will be appreciated by the people of Birmingham and fans of the Peaky Blinders show.

A #LastOrders hashtag painted on the mural makes a poignant Garrison pub reference to the end of the Peaky Blinders television series after nearly a decade of entertaining the audience both here in the UK and around the world.

Show creator Steven Knight was very impressed by the freshly painted mural and spoke about his incredulity at how street artists can produce works on such an epic scale using cans of spray paint as brushes.

“It’s fantastic, I don’t know how they do it. It’s identical,” he told I Am Birmingham.

Knight also commented on the grim weather during the launch which he felt “added to the feel of the show” and a sense of the Peaky Blinders gang “coming home” to one of their drinking haunts – The Rainbow pub – which is situated around the corner from the freshly painted mural.

Discussing the final season of the Peaky Blinders, Knight said the final series of the show holds lots of dramatic “surprises” for fans of the BAFTA award-winning series.

One closely guarded secret which was revealed during the unveiling of the mural was the broadcast date of the eagerly-awaited  Season 6 of Peaky Blinders, Sunday 27 February, a date emblazoned across the top of the outdoor mural in Digbeth.

The Brummie gangster show has become a huge global hit since first being broadcast in September 2013, with fashion and hairstyles related to key characters inspiring fans across the world.

Originally broadcast on BBC Two, the last two series of the show were moved to BBC One in the UK, while Netflix acquired exclusive US distribution rights in 2014 and also stream the drama on their UK platform.

Despite the drama soon coming to a close on TV screens, Knight revealed that the Peaky Blinders will live on in other formats including a full-length feature film, a stage show, and even a dance show by Rambert Dance called ‘The Redemption of Thomas Shelby’ which is due to open later this year at the Birmingham Hippodrome.

Knight confirmed he is writing a film inspired by the world of the Birmingham-based gang, ahead of the show’s finale, proudly confirming it would fittingly be filmed partly in Digbeth.

The first episode of Peaky Blinders series 6 will air on BBC One at 9pm on Sunday 27 February.