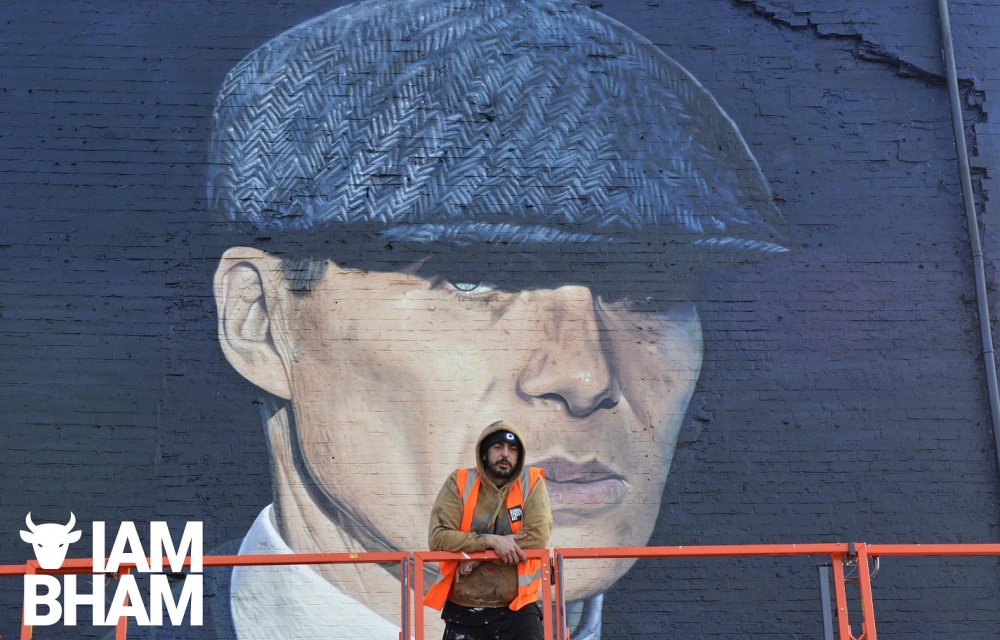 A new mural painted in Digbeth for the final season of Peaky Blinders (Photo: Rangzeb Hussain)

The finishing touches are being applied to a brand new mural in Digbeth to announce the last ever season of the BBC’s Small Heath gangster show Peaky Blinders.

The large-scale street art in Digbeth Court will receive an official unveiling on Tuesday 15 February.

The new mural in Birmingham – still partly covered by a cherry picker – was commissioned by the BBC to herald Season 6 of the popular Peaky Blinders show which has garnered an international fan base.

The Birmingham gangster show – which is set in the Small Heath area of Birmingham – has been a huge hit for the BBC and has picked up new fans when it was streamed on Netflix. Famous fans of the drama series include Hollywood actor Brad Pitt and rapper Snoop Dogg.

The gigantic street art is being painted by Manchester-based artist Akse and he’s been busy painting the epic mural for the past couple of days in a car park in Digbeth Court near The Rainbow pub which was reputed to be frequented by the real-life Brummie gangsters.

Peaky Blinders fan Emma, from Birmingham, heard about the new street art and made a trip into Digbeth to see the striking new piece for herself.

Speaking to I Am Birmingham, Emma said: “This is such a lovely mural and a fantastic tribute to the show. I love the Peaky Blinders and I’ve seen all the seasons and really looking forward to the new series.

“This show has really put Birmingham on the cultural map, and I’m proud of my city. The art design of the the Peaky Blinders show has introduced a really cool and elegant dress style.

“I run a Peaky Blinders fan group where we all dress up as our favourite characters. It’s such a great way to connect with friends and we all have a family day out, even the kids dress up, and everyone has lots of fun.”

The art is now almost complete and only the writing remains to be added to finalise the mural. The main focus of the mural is a portrait of the TV drama’s lead character Thomas Shelby – played by Cillian Murphy – wearing his iconic cap lowered over his brooding eyes.

Fans of the show have been waiting patiently for Season 6 after news broke out that the COVID-19 pandemic had halted the show followed by tragic news of the death of actress Helen McCrory who played Aunt Polly in the drama series.

Writer Steven Knight has confirmed the show is now ready and the BBC will shortly announce the release date of the first episode of the new season. Knight has also stated that the new series will be darker and will explore the rise of Fascism and the Far-Right in the UK.

Fans of the show were left shocked and stunned when Knight said that Season 6 will be the last ever series of the hugely popular show. However, he went on to say that despite the television series coming to an end there are plans afoot to produce a full-length feature film.