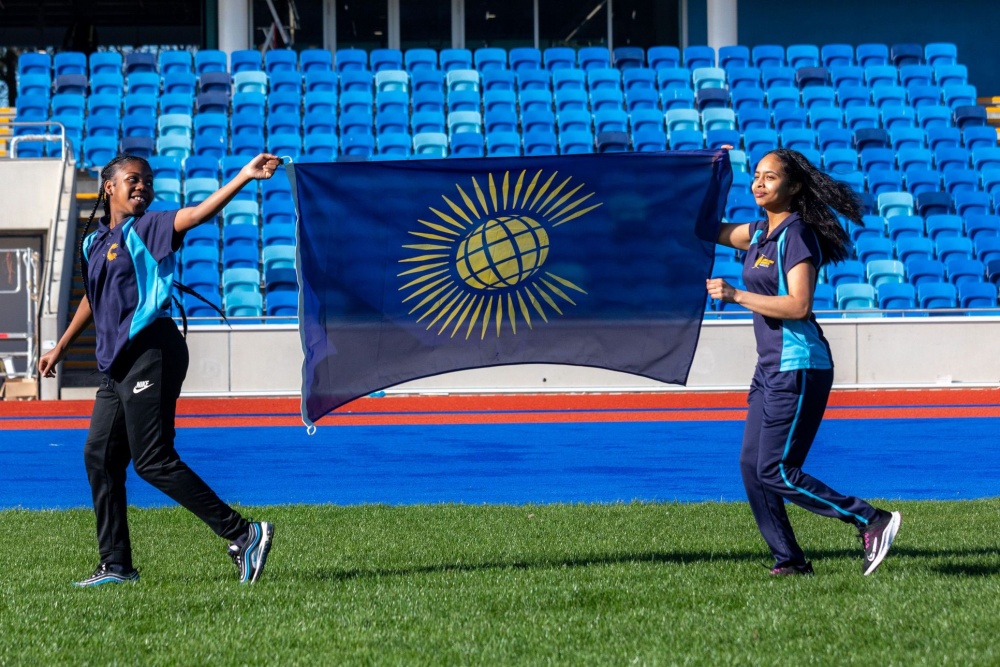 To celebrate Commonwealth Day, former, current and future stars of athletics in Birmingham tried out the track at the newly transformed Alexander Stadium and they were joined in the impressive new facility by 72 school children from across Birmingham.

Each pupil represented one of the nations and territories that will participate in the Birmingham 2022 Commonwealth Games, with the facility in the Perry Barr area of the city set to play a crucial role at Games time, hosting the Opening and Closing Ceremonies, as well as 59 athletics events.

The stadium, which has been the proud home of Birchfield Harriers athletics club since 1978, an athletics club that has produced a huge number of Commonwealth stars, will house up to 30,000 spectators at each Commonwealth Games session, before reverting to a permanent capacity of around 18,000 post-Games.

With constructors in the final stages of commissioning the building and the decoration and snagging being completed, some of the temporary infrastructure such as the additional seating and lighting are already being installed in the venue.

Cllr Ian Ward, Leader of Birmingham City Council, who own the venue and have overseen the redevelopment, said: “The interest and excitement for Birmingham 2022 is growing on a daily basis as the finishing touches are made to the preparations for the biggest event to ever be staged in the city.

“It was a special moment to see pupils from schools located in many different areas of our Proud Host City on the Alexander Stadium track on Commonwealth Day in the year of our Commonwealth Games.

“These are the Games for Everyone and everything we gain from our bold decision to bid for the event will be of the greatest long-term benefit to young people like those who visited the venue today.”

Ian Reid, CEO of Birmingham 2022, said: “Today is very special as it is a day when the Commonwealth is united in celebration. Many of these celebrations will highlight the countdown to the Birmingham 2022 Commonwealth Games and it is now just 136 days until athletes from all of the 72 nations and territories will gather together at the Alexander Stadium for the official start to 11 days of fantastic sporting action.”

As celebrations took place in Birmingham, at Westminster Abbey and around the Commonwealth, the Queen’s Baton Relay was in New Zealand to mark Commonwealth Day.

The day unfolded with community and ceremonial events. Lewis Clareburt, swimmer and Commonwealth Games gold medallist, and Irene van Dyk, the most capped international netball player of all time, were among the Batonbearers to take on the Relay in the former Commonwealth Games host country.

Birchfield Harrier, Rhiana Burrell, who is 18 years old and recently came fifth in the high jump at the UK Athletics Indoor Championships said: “I’m really excited that the Commonwealth Games is going to be held in Birmingham, it’s inspiring to have such a major event happening in my home town. I also can’t wait to be back training here at the Alexander Stadium. Having a world-class facility like this will benefit Birmingham athletes for years to come.”