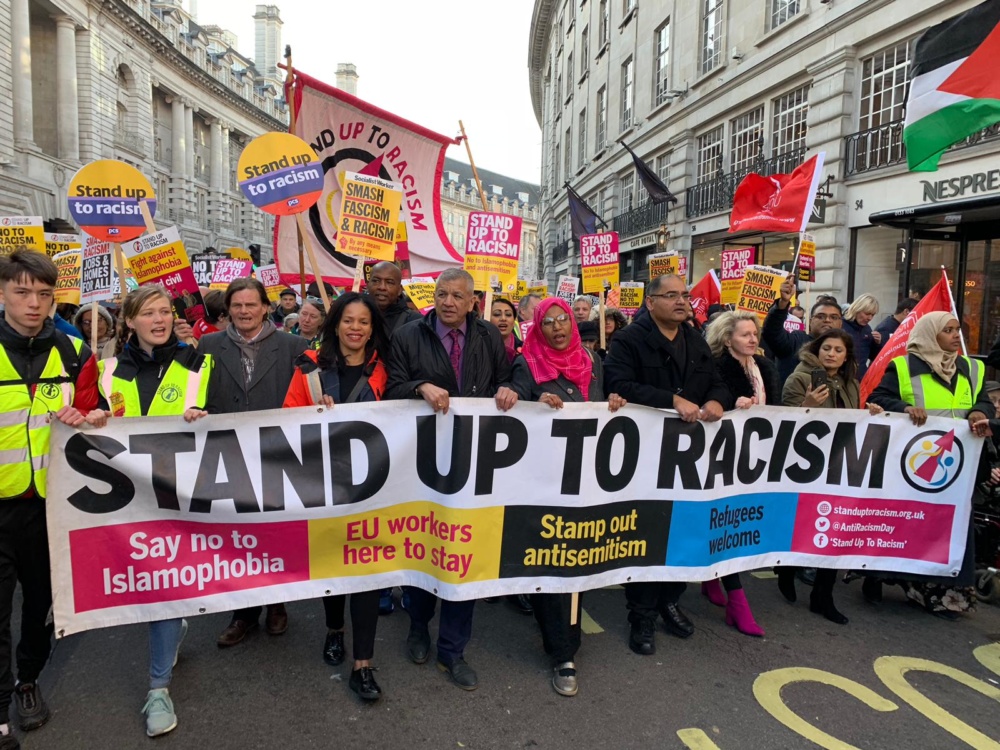 Hundreds of people from the West Midlands will be joining thousands of activists for an anti-racism rally in London (Photo: SUTR)

Hundreds of Birmingham residents are today joining thousands of people in London for a rally to mark international UN Anti Racism Day.

As protests take place in cities around the world under the slogan ‘World Against Racism & Fascism’, the annual awareness day is being observed with a mass march through central London this afternoon.

From the West Midlands, coaches filled with anti-racism activists, justice campaigners and supporters of unity over hate will be departing for the capital from Wolverhampton, Walsall and Birmingham this morning, with many others making their way in cars and on public transport.

Joining the gathering, expected to be attended by tens of thousands of people, is campaigner Maz Saleem from Birmingham, whose father was killed by a far-right Ukrainian student in April 2013.

Mohammed Saleem, 82, was stabbed by white supremacist Pavlo Lapshyn in Small Heath on 29 April of that year, less than a week after Lapshyn had arrived in the UK.

25-year-old Lapshyn also planted three bombs near three mosques in the West Midlands as part of a campaign he said was motivated by racial hatred. When asked why he had targeted the mosque, he told West Midlands Police: “Because they are not white – and I am white.”

Lapshyn pleaded guilty to murder, as well as plotting to cause explosions near mosques in Walsall, Tipton and Wolverhampton. The “neo-Nazi” was sentenced at the Old Bailey and jailed for at least 40 years.

Maz Saleem wants her father’s murder itself to be recognised as an act of terror and has been working with schools to educate young people about Islamophobia.

“This was one of the biggest acts of terrorism on UK soil. Yet to this day most people have no idea about this case,” she said.

“Whenever terror-related headlines reach our screens they are often about those who identify with the Muslim faith; rarely do we hear of the merciless violence of white supremacists who took my father’s life.”

The global day of action aims to oppose all forms of racism, Islamophobia and antisemitism, and unite people against the rise of fascism.

Speakers will address the congregating crowds at the start of the march in Portland Place from 12.30pm and in Parliament Square, where the event concludes, between 2.30pm and 4pm.

Among them are activist David Rosenberg, children’s author Michael Rosen, MPs Jeremy Corbyn, Bell Ribeiro Addy, Richard Burgon and Dianne Abbott; and Sukhdev Reel, who lost her son Ricky Reel in what she describes as a racist murder.

Additionally, music acts Riko Dan, Cristale, Flodan & DJ Karnage will be performing on stage in the square as part of entertainment provided by Love Music Hate Racism. British singer and activist Jermaine Jackman, a winner of BBC talent competition show The Voice, will also be speaking during the march.

Ukrainian refugees are also joining and speaking at the rally in a show of solidarity with Ukraine, in light of the current Russian invasion of the country and 3.2 million people fleeing the eastern European nation.

Campaigners say the events are timely given the outrage and anger at the strip-searching of Child Q, ongoing racism in policing, and “no action on eradicating institutional racism”.

Labour MP Diane Abbott, who is President of Stand up to Racism, said: “Child Q is a shocking case. It shows the longstanding problems with racism and misogyny in the Metropolitan Police force. We must keep fighting racism and sexism in the Met.”

“All forms of racism and xenophobia are one the rise. The government is once more increasing division to distract from the effects of its own failed policies. Ordinary people are facing a cost of living crisis, there is war on the edges of Europe and we all face the existential threat of the climate crisis.

“The government’s answer is no action against police strip-search & more stop and search and a refusal to treat all refugees humanely. It is time to increase our voices against all this, and a huge turnout on Anti-Racism Day will be our chance to do that.”

According to British organisation Stand Up To Racism, who are co-ordinating national action with the support of the Trade Unions Council, racism in the UK is on the rise and needs to be challenged.

“At a time when governments are intensifying hostile environments for refugees and migrants, when the Black Lives Matter movement is exposing the depths of institutional racism, and when the far right and fascist forces continue to pose a threat, the day of international demonstrations is extremely important.

“Here in Britain we have a cabinet, led by Johnson and Patel, launching a racist offensive, with their Nationality and Borders Bill, Policing Bill, and Higher Education Bill representing a raft of intensified racist policy attacking refugees and migrants, Gypsy Roma and Traveller communities, and the Black Lives Matter and wider anti racist movement.

“They denied institutional racism in their CRED report, and attacked footballers who did #TakeTheKnee actions against racism.”

The group are urging the public to “mobilise the anti racist majority in big numbers, and build the mass anti racist movement we need to challenge Johnson and Patel’s racist offensive”, with events planned throughout the weekend of Saturday 19 and Sunday 20 March.

When and where will the march start?

The national Stand Up To Racism rally and march will begin from outside the BBC HQ at Portland Place in London at 12 noon on Saturday 19 March 2022.

1.30pm: March sets off, marching down Regent Street, through Piccidilly Circus, on to Trafalgar Square and down Whitehall past Downing Street to Parliament Square for end rally.

2.15pm: Accessible March route assembles at Richmond Terrace (on Whitehall directly opposite 10 Downing Street), and marches to Parliament Square for 2.30pm rally, passing straight down past parliament, and entering the Square at the Victoria Street corner.

Who is speaking at the rally?

On Saturday 19 March 2022 at 11am, there will also be a mass rally in Kelvingrove Park in Glasgow which will march to George Square. Smaller events will also be taking place in city centres across England and in Wales, where a rally is set to be held at 12 noon outside City Hall in Cardiff.

In parallel to UK events, global rallies are taking place across Europe, the US, Latin America and Africa.

The International Day for the Elimination of Racial Discrimination is observed annually on the day the police in Sharpeville, South Africa, opened fire and killed 69 people at a peaceful demonstration against apartheid “pass laws” in 1960.

In 1979, the General Assembly adopted a programme of activities to be undertaken during the second half of the Decade for Action to Combat Racism and Racial Discrimination. On that occasion, the General Assembly decided that a week of solidarity with the peoples struggling against racism and racial discrimination, beginning on 21 March, would be organised annually in all States.

Since then, the apartheid system in South Africa has been dismantled. Racist laws and practices have been abolished in many countries, and we have built an international framework for fighting racism, guided by the International Convention on the Elimination of Racial Discrimination. The Convention is now nearing universal ratification, yet still, in all regions, too many individuals, communities and societies suffer from the injustice and stigma that racism brings.

According to the United Nations, “the 2022 edition of the international day focuses on the theme ‘Voices for action against racism’, with the aim of highlighting the importance of strengthening meaningful and safe public participation and representation in all areas of decision-making to prevent and combat racial discrimination; reaffirming the importance of full respect for the rights to freedom of expression and peaceful assembly and of protecting civic space; and recognising the contribution of individuals and organisations that stand up against racial discrimination and the challenges they face.

“This simple message can be a powerful vehicle to encourage people everywhere to strengthen and consolidate their voices against racism, to mobilise against all forms and manifestations of racial discrimination and injustice, and to ensure a safe environment for those who speak up.

“It lends itself towards telling personal interest stories and can feature people and populations from across the world.”