REVIEW: Footloose the Musical unleashes the spirit of love and healing 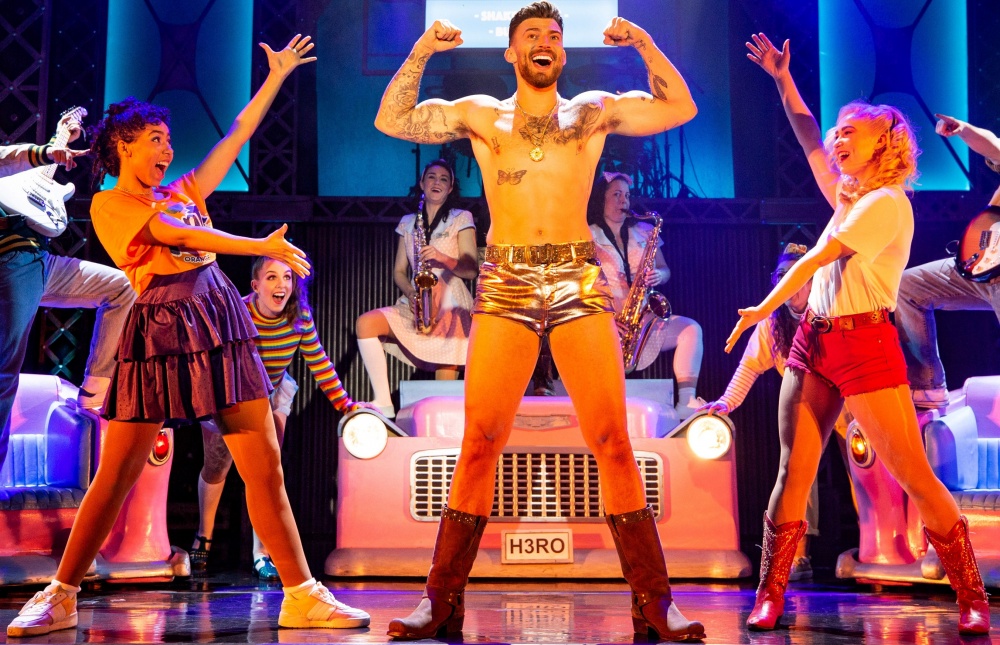 1980’s Hollywood blockbuster musical Footloose arrives in Birmingham with a blaze of colour and passion at The Alexandra theatre.

This adaptation of Footloose – by Selladoor Productions – set the stage alight with a sensational burst of singing and dancing, and an exhilarating celebration of life.

Before discussing tonight’s press night (19 April) of Footloose the Musical at The Alexandra theatre I have a confession to make – I’ve never seen the original 1980’s film (starring Kevin Bacon).

I was familiar with the basic plot synopsis – a young man from the big city travels with his mother to a remote and sleepy backwater town where a church preacher rules supreme and all things jovial such as singing and dancing are frowned upon and outlawed.

What I saw tonight was breathtaking. This was not some glitzy, glittery and fizzy concoction which one consumes like a fast meal and then forgets an hour later.

The show has multiple layers, and the deeper one looks the more complex and philosophical it becomes. The exterior layer is bright and breezy, with neon lights and prime colours, and the stage drips with a multitude of glorious colours that seem to weave into each other like a soulful kaleidoscope.

The interior of the musical explores the darkness that itches and bubbles beneath the lives of the characters who live in a trapped existence where social rules regulate and stifle their dreams and desires.

Although released as a feature film in 1984 the themes of outsiders seems ever more pertinent in the cotemporary world where the nightly television news bulletins are filled with stories of refugees, migrant workers, and immigrants. The world has become more divisive, and more suspicion and anger is aimed at outsiders.

The main protagonist in Footloose the Musical is a young man named Ren who arrives in a town where newcomers are given a frosty welcome. Ren and his mother are viewed with deep suspicion, and the ruling members of the community keep their doors firmly closed to what they judge to be a “bad influence” by outsiders on their society and culture.

The magical ingredient in Footloose the Musical is how it sprinkles light and hope in a world where darkness and grief have taken hold of people. The town where the story is set is frozen with loss, dead dreams, and unspoken grief. Lives are stagnating, and the next generation is hungry to taste the forbidden fruit of freedom.

The last two years in our beleaguered world were frozen with the horrific impact of the COVID-19 pandemic upon human life on this planet. Lives were closed up, outsiders were kept at bay, and fear and paranoia ruled the roost.

The metaphorical allusions in Footloose the Musical to a shuttered world resonated with me, and when the show used music and dancing as a force of healing and recovery, of connecting with fellow human being and finding a way towards a better tomorrow, it really lifted the spirits and restored hope that despite the days of darkness and grief there will be healing.

As the musical delves deeper into the story and we learn about the lives of various characters who are nursing personal pain and loss, a grieving father finds a new son and a heartbroken son who hopes his absent father will one day return finds a father in an unexpected place.

A strict authoritarian Reverend, who structures his life by the bible, learns to understand the Holy Scriptures from a young man who originally had little time for religious books. There was total silence in the theatre when Ren tries to thaw the ice inside the Reverend – who has banned dancing – by reciting a line from the bible: “there is a time to weep and a time to laugh, a time to mourn and a time to dance”.

Footloose is about listening and understanding, and about reaching out to outsiders and discovering a shared humanity which can lead to inner peace and healing.

Darren Day performs the role of Reverend Moore as a man chiseled from primordial granite. He appears on stage for the first time, looming out of the velvet darkness like a man walking out of some Neolithic cave, surveying his kingdom like a biblical king while a huge cross dangles over his head like a silver beacon of light in a sea of murky darkness.

As the show heads towards the flamboyant climax there is a dramatic change in Day as light enters his soul and he embraces life with a smile.

Joshua Hawkins is full of energy as Ren the city boy who finds himself cast adrift in the wide open spaces of the backwater town where everyone knows each other. Hawkins has the charisma to charm the crowds and he lets rip with his vocal and dancing skills in a nonstop display of pure exhilaration.

Lucy Munden takes on the part of Ariel, the Reverend’s feisty and rebellious daughter. She initially comes across as a dutiful and quiet student, all prim and proper at home and school, and then there is a sudden change when she’s with her friends after school and she unbuttons her shirt and removes her ankle length skirt to reveal another outfit hidden underneath her school attire. Her red leather calf length boots, red shorts, and skimpy top look like they’ve been painted onto the canvas of her flesh.

The sassy costume design worn by Ariel is daring but never gratuitous. This is a girl on the cusp of womanhood, a rose opening its petals to the light of the sun. She will not be held hostage to the rules and dictums of a male controlled world. She wants to live, to breathe, and exist without restriction or confinement. She expresses her desire for freedom by articulating it through her racy choice of garments.

Munden invests confidence and courage to the character of Ariel. Her Ariel is a strong female who has the strength and grit to stand up to the bullies in her community who dare to label her or chastise her for her determination to dress how she feels. Munden not only looks stunning in her dance segments but she also has powerful vocals which bring to life the lyrics of the songs she sings throughout the show.

Footloose the Musical boasts two romancing couples in the form of Ren and Ariel, and their friends Rusty and Willard. Both couples are contrasting and convey love in beautiful and unique ways.

Whilst Ren and Ariel struggle through the tumult of overprotective parents and social norms, Rusty and Willard have a more playful, carefree and fun romance.

Oonagh Cox is a fiery ball of energy as Rusty, constantly zipping around the stage like a bolt of lightning while Jake Quickenden as Willard employs impeccable comedy timing in his dance routines and song numbers. One of his dance routines had pulses racing in the theatre as Quickenden tore off his dungarees like a Las Vegas Chippendale to display golden shorts and leather boots.

The whoops of delight that erupted from the audience when the golden hued Quickenden gyrated provocatively must have been heard in the next county.

The tireless cast and crew of Footloose the Musical worked wonders from beginning to end, and some of the ensemble cast members also doubled as live musicians on stage.

The production dispensed with a live orchestra in the pit and instead opted for some of the cast on stage to play musical instruments while they sang and danced, and in one scene also skipped while playing their instruments. Comedy timing, dancing, playing live music, and smiling despite the physical challenges posed by the roles was truly remarkable. The talent displayed by these artists was incredible.

They say the proof of the pudding is in the taste, and this Footloose the Musical pudding was delicious. The entire audience was up on their feet clapping and roaring with delight as the show ended. The standing ovation lasted for so long that the cast and crew thanked the audience with a stupendous medley of tunes and choreography as an encore.

This night out at the theatre was a glorious riot of music, dancing, and laughing yet it also added serious themes into the mix which resulted in making the show relevant and topical. Love and healing are the heart and soul of this uplifting show.

Footloose the Musical is now playing at The Alexandra, Birmingham, until Saturday 23 April