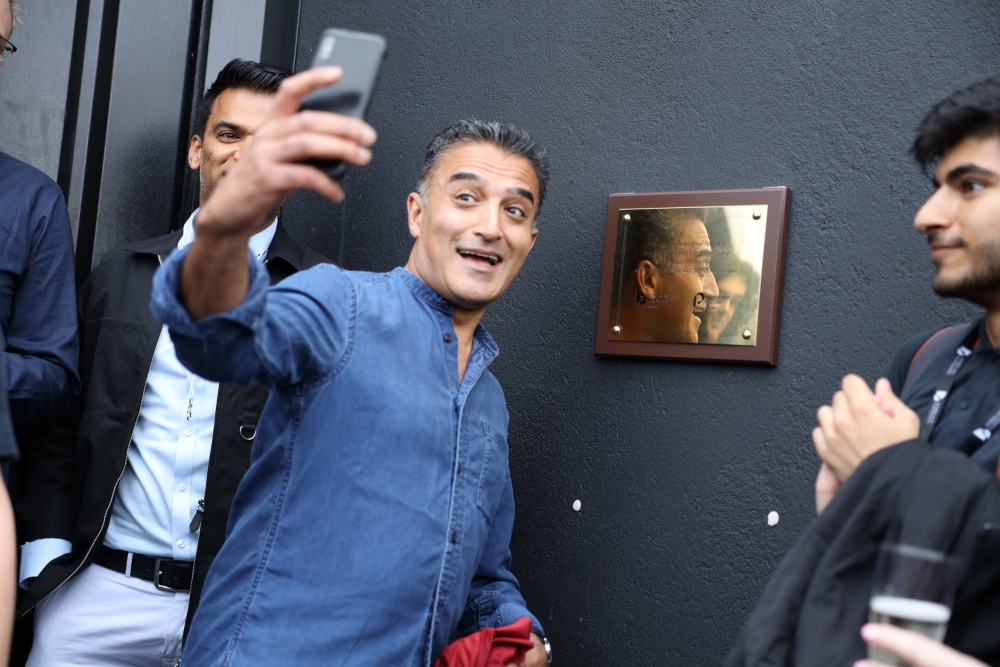 Adil Ray poses with a plaque he unveiled at Performers College in Birmingham (Photo: Rebecca Brandler)

British actor, comedian and presenter Adil Ray was in Birmingham to officially open Performers College and Screen and Film School, where he is a patron.

The two colleges share a brand new state-of-the-art building in the Digbeth area, which Birmingham City Council has recently given the green light for long term investment and regeneration.

The two colleges are situated in the old Rea Studios building across the road from music school BIMM Birmingham, which is part of the same educational provider BIMM Group. All three colleges are thriving and will double their student numbers next year and as a result of their growth, they will be opening new buildings.

Before cutting the ribbon and unveiling a plaque yesterday (Thursday 26 May), Adil Ray said:

“It’s been great. I feel very proud to be a patron of Screen and Film School. It’s so essential for our region, as we’re such a thriving industry now, and it’s growing all the time.

“Schools like this are a vital part of the machine. I wish there was a school I could have gone to when I started out to learn and pick up so many skills and work with great creatives.

“Those opportunities were scarce in my time, but the fact they’re here now is fantastic. So I say to anybody out there who wants to tell their stories and is thinking about going into the scary business of media, film and television – it’s not scary at all, just come here.”

Last August, Ray announced a special funded scholarship at the college worth nearly £30,000 for one lucky film student.

Adil also gave some encouraging advice to the students:

“Keep going, keep dreaming, work hard and enjoy every second. I can’t reiterate again how proud I am to be a patron and here to help.”

“I am so delighted that we have officially opened Performers College in Birmingham. We welcomed a variety of industry partners, including Birmingham Royal Ballet, ACE Dance and Music, and the Commonwealth Games casting team, to celebrate the launch of our college.

“We are thrilled to bring our unique vocational training in acting, musical theatre and dance to the heart of Digbeth and be a part of the thriving performing arts scene in the midlands, preparing the next generation of young performers for a career in this exciting industry.”