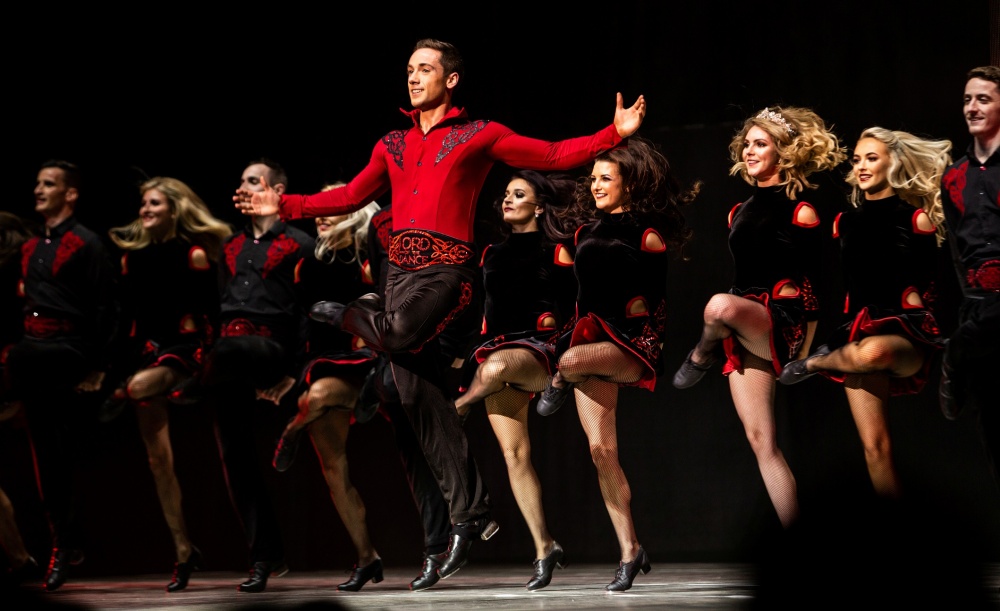 Lord of the Dance stunned audiences at the The Alexandra theatre in Birmingham (Photo: Brian Doherty)

Michael Flatley’s worldwide smash-hit show Lord of the Dance, which has delighted over 60 million people around the world, comes to Birmingham for a 25th anniversary tour.

The phenomenally successful show – featuring a huge swirling array of exuberant dancers and singers – stunned audiences at The Alexandra theatre with a cosmic energy that delighted and brought joy.

It only seems like yesterday when dancer Michael Flatley lit up the world stage with a show called Lord of the Dance in 1996 which has since been performed in 1,000 venues around the globe.

The sensational show, with an incredibly infectious positive energy, continues to pulsate and give pleasure to people after the passing of a quarter of a century.

For its 25th anniversary incarnation the show’s director Michael Flatley has streamlined and updated the choreography while composer Gerard Fahy – who wrote the music for the original show – has written new material for the anniversary tour.

The show retains the classic story of light – conveyed through the character of Lord of the Dance – overcoming the ominous forces of darkness – led by the Dark Lord – through the magic of music, dance and love.

The show’s key theme is to inspire and uplift the audience through the art of storytelling using music and dance. In times of darkness theatre offers humanity a glimmer of hope and this show is an excellent example of that joyful healing.

The trademark Celtic roots music – rich with Irish folklore and mythology – is used to create an atmospheric and sensual atmosphere in which the troupe of talented dancers weave tales of healing and hope in dark times.

As the drama unfolds across the stage, with the character of the Little Spirit acting as the connecting thread between the story threads, the tale shifts from darkness to light.

The stage art design used clever back projections to transport the audience to landscapes filled with primordial darkness and paranoia through to hellish infernos where tormented souls raged and writhed. The backdrops contrasted the infernal landscapes with sweeping images of emerald fields speckled with glittering trees that swayed in the wind.

Cassidy Ludwig is mesmerising as the waif-like Little Spirit, playing her penny whistle as she joyfully hops and skips across the stage while leading the audience into the world of the Lord of the Dance.

Despite her size and elfish spirit, Cassidy displays strength and resilience in a very demanding role that initially seems to be lightweight. Her performance is melodious and infectious, and the audience was drawn to her warmth and characterisation.

The director and producer of the show Michael Flatley, who performed Lord of the Dance in the original production, passes on the mantle of the role to a new generation of dancers.

At the Alexandra Theatre the iconic role of the Lord of the Dance was taken by Cathal Keaney.

Keaney was magnetic, athletic and very charismatic, and his tireless dancing – which required intense concentration and stamina – had the audience erupting with applause at the end of each of his dance routines.

The villainous Dark Lord in this production was played by Alasdair Spencer and he immediately gripped the audience when he appeared from the depth of his netherworld kingdom.

His movements projected the menace and fire raging inside the heart of the dark character. His used his razor sharp masculine energy to subdue and smother the forces of light and love with aggression and contempt.

Keaney and Spencer both gave it their all during the epic duel between the Lord of the Dance and the Dark Lord. The stage crackled with dramatic energy as the two men danced and battled in a thrilling dance which left the audience on the edge of their seats.

The soothing feminine energy in the Celtic themed show was highlighted by the ethereal and haunting character of Saoirse.

Niamh Shevlin was beautiful and delicate in the role of Saoirse, a complete contrast to the heavy darkness of the Dark Lord and his minions. Shevlin used stillness and inner calm to restore balance in a world descending into an apocalyptic abyss of darkness.

One of the Dark Lord’s servants, an enchantress named Morrighan, tries to seduce and beguile the Lord of the Dance and lead him towards a nefarious existence. Andrea Papp Kren is smoky and sultry as Morrighan, her dance is really potent and evocative and filled with such witchcraft that she weaves a spell upon the audience with her alluring and hypnotic performance which seamlessly merges with the music.

The role of Erin the Goddess was taken by singer Celyn Cartwright who brought a gentle equilibrium to the show with songs that sprinkled serenity across the stage.

Fiddle players Aisling Sage and Megan McGinley added to the calm atmosphere with interludes that propelled the narrative forward and onwards. Each melody flowing from their fiddle strings was in complete step with their incredible dance movements.

These gifted musicians not only played their instruments but also somehow managed to dance while wearing high heels and walking on a central staircase. They produced an immaculate, and miraculous, performance without a single hitch.

The choreography in the show was dazzling and breathtaking, with every single dancer performing in perfect harmony and synchronisation, weaving in and out of lines and circles at breakneck speeds.

It was absolutely astounding, and a testament to the quality of talent on stage, that there was never a moment when a dancer made a mistake or there was a collision or mishap.

The professionalism and dedication on display upon The Alexandra stage in Birmingham was truly awe-inspiring.

The multiple costume changes were a colourful confection of beauty and style which added sparkle and magic to the enchanting tale of love in a dark world.

The outfits worn by both the male and female performers were a blaze of colours and tones, at times sparkling and sizzling, and at others dark and sombre and imbued with Gothic mystique.

Some of the fabrics and materials of the costumes rippled and moved as if alive on the bodies of the dancers. The imaginative designs captured the essence of the central themes of the show.

This was a firework of a show, a rainbow of musical delights, fizzing with high energy and thrilling to watch. The exquisite lighting and pyrotechnic effects were impressive and added a brilliant ambiance to the dancing and singing.

The deep blacks and reds generated the heat of hellfire and chaos while the whites and greens brought the balm of coolness and freedom. The costumes, and back projected landscapes, took the audience on a journey where shades and tones took on emotional resonance.

The standing ovations at the climax of the show were well deserved, with people screaming at the top of their voices for an encore which the vast cast of Lord of the Dance graciously delivered.

As the show closed and people began to shuffle out of the theatre an elderly member of the audience perfectly summed up one of the show’s key aims. She looked around the theatre with a warm smile on her face and said, “This show makes me want to dance!”

Her heartfelt words mirrored the words of the show’s creator Michael Flatley who firmly believes “Nothing is impossible. Follow your dreams.”

No matter how young or old you are, regardless of race or gender, Lord of the Dance reaches out to all and inspires us to tap into ourselves and discover our own magic.

Lord of the Dance is now playing at The Alexandra, Birmingham, until Sunday 19th June