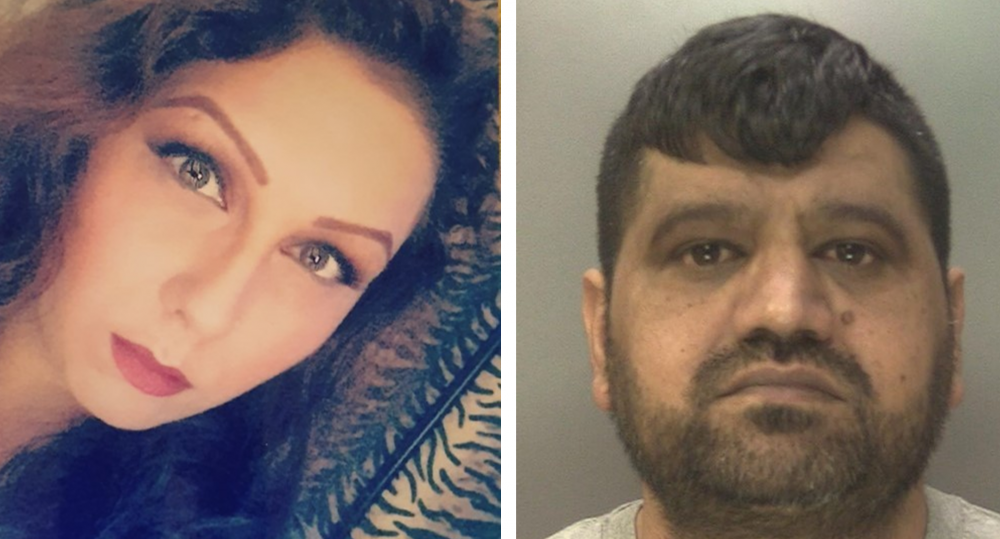 The killer of Marena Shaban has been jailed for her brutal murder (Photo: WMP)

The former husband of a woman, who was brutally attacked on her doorstep in the Bordesley Green area of Birmingham, has been found guilty of her murder.

Taxi driver Mohammed Arfan, 42, viciously killed his ex-wife Marena Shaban, 41, in January this year and was seen laughing after the murder in CCTV footage from a barber shop.

A “jealous and obsessed” man – who refused to come to terms with the separation from his ex-wife – began a campaign of stalking which culminated in a horrific tragedy.

Arfan, from Ward End, stalked his ex-wife Shaban on social media accounts, and also spied and followed her on numerous occasions – using his taxi – from her work place to the entrance of her apartment in North Holme, Bordesley Green.

Bone-chilling CCTV footage shows the killer waiting for the unsuspecting Marena to finish work and head home where the fatal attack would take place.

After staking Marena’s movements and timetable, the killer waited for the victim to arrive home on the evening of Friday 28 January when he launched his ambush.

The cold-blooded killer wore an Afro wig in an attempt to hide his identity when he launched his fatal attack on his former partner.

Shaban suffered 20 stab wounds to her chest in the frenzied onslaught by Arfan. The murderer threw away the wig and weapon, including the jumper he was wearing, and also abandoned his car after the savage killing.

Around 30 minutes after the sickening murder, the callous Arfan can be seen joking and laughing with his mates at a barber shop.

The heartless killer showed absolutely no remorse whatsoever, and brazenly turned up at the location of the brutal murder to gaze at police officers who were grouped around the mutilated body of his ex-wife.

The killer’s car was finally discovered by police and a forensics team found blood on the door handle of the vehicle.

The wig and a lump hammer were also found inside the abandoned car.

When Arfan was apprehended by police he immediately denied the murder and claimed he had not made contact with his ex-wife for over a year.

On Friday 15 July Arfan pleaded guilty to the murder of Marena Shaban at Birmingham Crown Court.

He was handed a 22 year jail sentence.

Following the sentencing, Marena’s mother issued a statement saying: “The social, emotional and mental implications of Marena’s tragic death have been catastrophic.

“The loss of a child is devastating and no parent ever envisages outliving their child.

“Marena was a devoted mother-of-four with an infectious smile who adored and loved her children, putting them first.

“The devastation felt by her children is indescribable.”

Detective Inspector Jim Colclough, from the Homicide unit, added: “This is a really tragic case, where four children have not only lost their mother, they are now without their father.

“This was a really intense investigation where a suspect was not immediately obvious, but the evidence was against him and I am really pleased that Arfan has pleaded guilty.

“Marena was on the doorstep of her own home, and was tragically killed by the father of her children, and someone she trusted.”