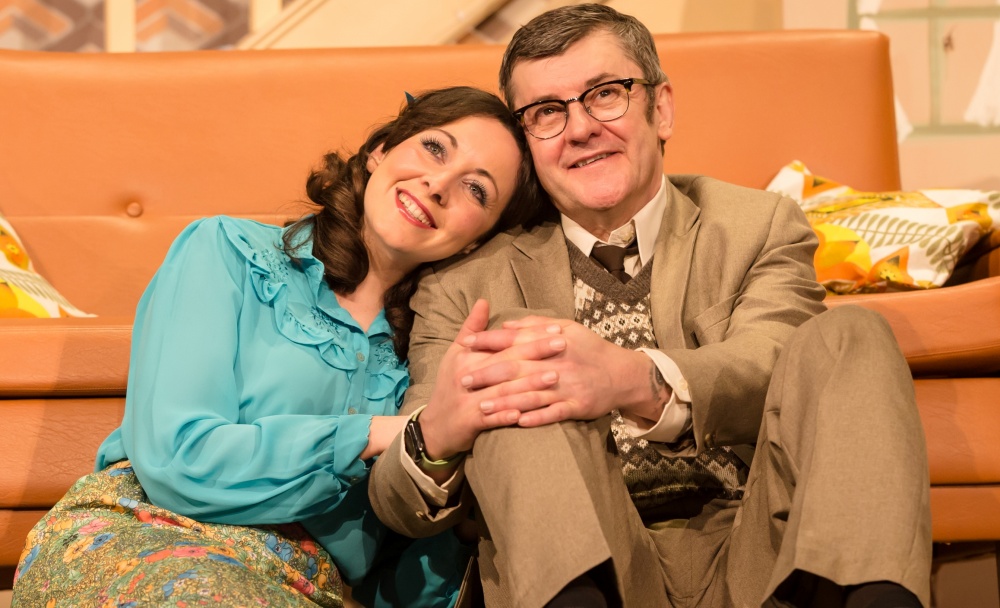 As the heatwave continues to soar across the city a brilliant stage version of Some Mothers Do ‘Ave ‘Em is raising comedy temperatures at The Alexandra theatre in Birmingham.

The classic 1970’s sitcom set alight the Birmingham stage with slapstick comedy and impeccable dialogue that had the audience literally chortling with joy.

The legendary character of Frank Spencer (played by Michael Crawford), hapless and sweetly innocent, brought weekly chaos and laughter into homes across the country during the 1970’s .

In the so-called golden era of British sitcom, the hit BBC comedy show – which detailed the destructive antics of the sweetly innocent Frank Spencer – racked up millions of viewers whenever it was broadcast.

The stage version is written by the show’s original writer Raymond Allen in collaboration with Guy Unsworth (who also directs), and the comedy spark remains as sharp, witty, and hilarious as the television series. There’s no moments of idleness or boredom here, the script moves along at a relentless and fiery pace which keeps the audience homed in on the action.

The writing is intelligent and so sparkling that there is no need for redundant expletives, or cheap and crude humour, this show treats the audience with genuine love and respect. The physical and verbal exchanges, the double entrendres, and the artful and funny way language is used by the various characters, weaves a solid comedy spell upon the audience.

Revealing too much about the plot would spoil some of the comedy delights waiting in store for those who have yet to see the show. Suffice to say the plot is a roller coaster ride that packs in everything including the kitchen sink, banisters and coaches! Nothing is safe when Frank Spencer is in the comedy house!

The iconic role of Frank Spencer is performed by the brilliant Joe Pasquale (The Producers, Spamalot) who puts everything at his disposable into the lovable and accident-prone Spencer who the audience roots for despite his constant mishaps and tomfoolery. Pasquale wisely refrains from producing a mirror copy of Crawford’s version of Frank Spencer. That rendition remains totally and wholly Crawford’s. What Pasquale does is put his own unique style and spin upon the role which brings out hidden nuggets for fans of the television show to enjoy in the 21st century.

Frank’s loving and supportive wife Betty is played by the charming Sarah Earnshaw (Casualty, Blue Peter) who brings warmth and understanding to Frank’s topsy-turvy world where surrealism holds sway over reality. Earnshaw acts as the perfect balance to the constant chaos that surrounds Frank.

Mrs Fisher – Frank’s long-suffering mother-in-law – is played by Susie Blake (Coronation Street, Mrs Brown’s Boys). Her acting is stupendous, especially in the scenes where she’s had a bit too much to drink and she starts to articulate her long stifled true feelings about Frank and his daily antics.

Special mention goes to James Patterson as Father O’Hara whose comedy timing is pitch perfect as he jostles about inside the Spencer’s house.

The house also gets a special mention because the stage design by Simon Higlett is pure genius. Without giving too much away, the set designs for the show are so good – and so in keeping with the spirit of the show – that the set becomes a character in the story which constantly tangles with Frank Spencer in the funniest ways imaginable.

Jenny Arnold’s choreography is unexpected and fresh, and the cast are absolutely enthusiastic when the cues come in for some dancing. The song selections – by artists such as Cher and Tom Jones – are inspired and joyful.

As the cast and crew took their bows – with sweat streaming down their faces – the standing ovation from the appreciate audience at the climax of the show was well deserved.