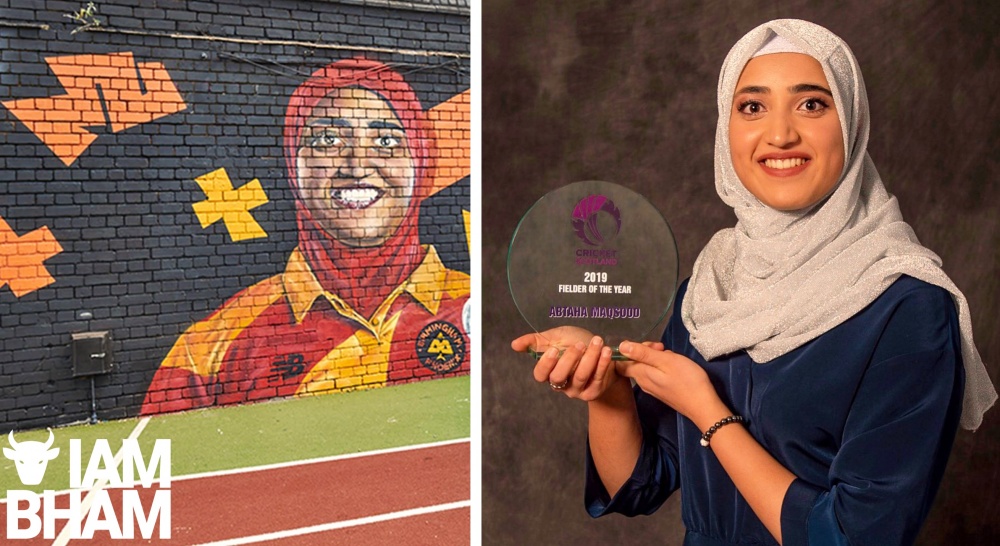 A stunning mural honouring British Muslim female cricket player Abtaha Maqsood has been unveiled at a primary school in the Small Heath area of Birmingham.

The gigantic mural – measuring 16ft – was painted by mural artist and illustrator Lucy Danielle who was born in the West Midlands.

The beautiful artwork, painted on a wall in the playground of Marlborough Primary School, aims to inspire children and usher in a positive role model for girls in the form of award-winning cricketer Abtaha Maqsood who plays for the Birmingham Phoenix.

Maqsood, 23, broke new ground – and made sporting and social history – when she became the first ever British female with Pakistani heritage to play cricket at an International Level for Scotland whilst proudly wearing her hijab.

The talented cricket player, who studied Dentistry in Glasgow, also became the first female to play cricket in Wales and England while wearing a hijab.

The strong-willed athlete is not only a world-class cricketer but she also holds a black belt in taekwondo.

This gifted, and courageous, young cricketer – the daughter of Pakistani immigrants – rose up and challenged Islamophobic, including cultural, stereotypes across Britain with her positive outlook which encompasses people of all races, faiths and genders.

The mural, which is painted on the wall of a Birmingham primary school, was commissioned to celebrate Maqsood signing on for another year with the Birmingham Phoenix.

It took artist Lucy Danielle over three sweltering days to spray-paint the striking mural honouring Maqsood on a huge wall that faces the sporting section of the school playground.

The bright and bold mural, which uses prime colours such as yellows and reds, features a portrait of cricketer Abtaha Maqsood.

Maqsood’s eyes twinkle with zest and energy as she gazes out from the brick wall, and her face beams with a radiant smile. Her portrait is surrounded by patterns and shapes which act as borders to the mural.

An inspirational slogan “Together We Rise” is painted near the top right of the epic mural. The Birmingham Phoenix circular badge can also been seen on Maqsood’s shirt which seems to move and ripple in the summer wind.

Artist Danielle has painted astonishing details into the vivid and sparkling mural which will hopefully brighten up the school playground for years to come.

Speaking to I Am Birmingham, artist Lucy Danielle said: “It was an honour to be involved in such a great project. Abtaha is a great role model for these children and they all seemed to have loved watching the artwork go up in their school.

“Hopefully, this inspires more to get involved in sports and perhaps even into graffiti.”

Maqsood attended the official unveiling of the mural on Monday (18 July) – with her family travelling down from Scotland to support her – at Marlborough Primary School which is situated on the border of Small Heath and Bordesley Green.

The school has a large intake of ethnic minority girls with a Muslim background who Maqsood hopes will be inspired to seek careers in sports and challenge negative racial and gender stereotypes.

Talking about the mural and its aims, a delighted Maqsood said: “It’s an honour to have this incredible mural created, especially when representation matters more than ever before.”

She feels that even if only a “handful” of schoolgirls are inspired to follow in her steps and take up cricket she will be delighted.

She firmly believes that the time has come to get parents to look beyond social and cultural barriers and support daughters who dream of pursuing a future in the world of sports such as cricket, football, swimming, athletics, etc.

Following the unveiling of the mural, Maqsood also met 75 female pupils  from Leigh Trust schools – which Marlborough Primary is a part of – and took part in a Q&A session.

“It’s a wonderful tribute to Abtaha who is one of the most promising spin bowlers within The Hundred, and is such a positive role model for all our pupils across the five schools within Leigh Trust.

“There is a lot of cricketing talent in the area already, so hopefully the new giant artwork will help inspire more children in the region to take up the sport!”

Craig Flindall, general manager for Birmingham Phoenix, added: “Abtaha is a renowned name in the sport and an incredibly talented cricketer, so we wanted to celebrate her and her achievements as part of the competition to-date with the creation of this stunning mural.

“We hope it inspires people across the community, and hope they’ll be supporting Abtaha and the wider Birmingham Phoenix teams this summer.”

Maqsood later visited a mosque in the Balsall Heath area of the city to chat and play cricket with older women in a positive bid to dispel old fashioned male attitudes towards Muslim females taking up sport.

Maqsood will soon be back in action on the cricket pitch with the Birmingham Phoenix in The Hundred tournament next month.