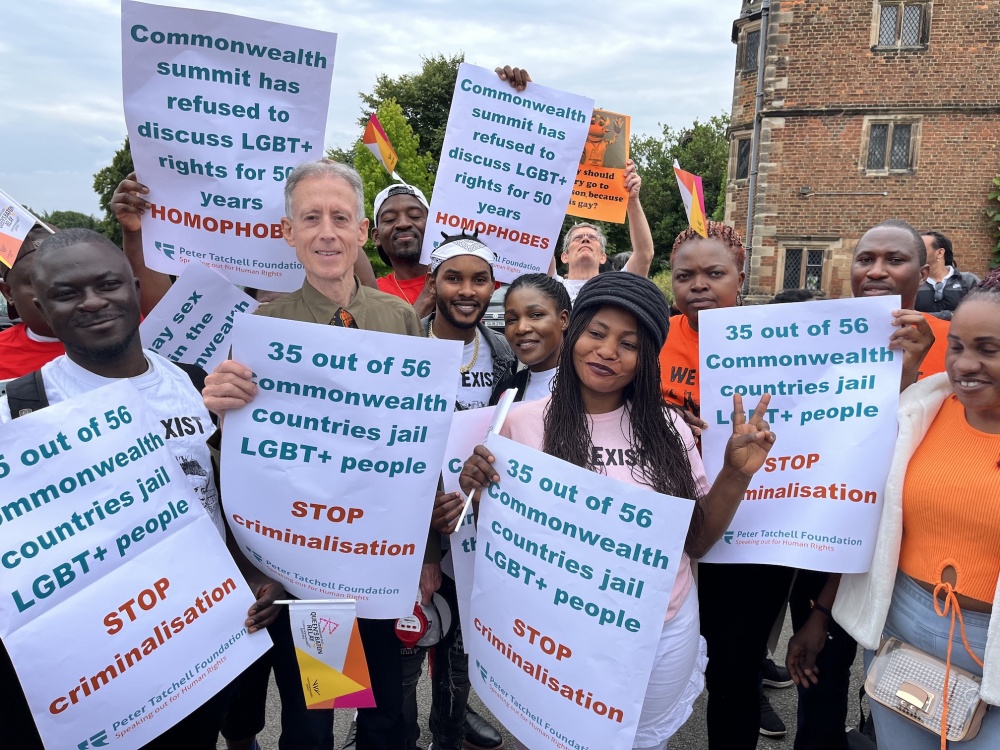 Protests were held today as the Queen’s Baton arrived at Aston Hall in Birmingham on its final stop before entering Alexander Stadium for the Commonwealth Games opening ceremony this evening.

Around 50 activists from the LGBTQ+ community lined the route in Aston, calling out “state-sanctioned homophobia” in the 35 Commonwealth member states that criminalise homosexuality.

The protesters, led by human rights campaigner Peter Tatchell, held up a large banner displaying the words “Abolish anti-gay laws in the Commonwealth”, as batonbearers carried the Queen’s Baton through the area.

“Most of those protesting had fled homophobic persecution in Commonwealth countries. Some had been arrested, beaten and driven out of their schools, jobs and homes. They are now refugees in the UK,” said protest organiser Tatchell.

“The Commonwealth Games organisers are saying that the competitions are inclusive. But a known LGBT+ athlete is more likely to be jailed than selected for the national team of their country in nearly two-thirds of Commonwealth nations where same-sex relations are illegal.”

The protest was coordinated by Tatchell’s social justice foundation with the backing of the Out and Proud African LGBTI group.

According to the foundation, Olympic and Commonwealth gold medallist Tom Daley OBE backed the protest, condemning the persecution of LGBTQ+ people in 62% of Commonwealth countries.

“Thirty-five out of the 56 Commonwealth member states criminalise same-sex relations. That’s half the countries in the world that outlaw homosexuality, Tom Daley said.

“Seven Commonwealth nations have a maximum penalty of life imprisonment under laws imposed by Britain in the 19th century when it was the colonial power.

“Every single person should be free to live their true authentic self, no matter where they are born or who they are. We must all keep working until everyone is free and equal.”

28-year-old Daley – who says he has “experienced homophobia all my life” – will make a powerful “historic” statement against homophobia at tonight’s Commonwealth Games opening ceremony.

“LGBT+ athletes must be safe and feel comfortable being their authentic selves without fear of persecution or death,” he said.

In Tom Daley: Illegal to Be Me, which airs on on BBC One 9 August at 9pm, the diver travels to counties including Pakistan and Jamaica, which have laws against same sex relationships, to ask what the sporting world can do to make a difference.

The Commonwealth is a voluntary association of 56 independent and equal countries. It is home to 2.5 billion people, and includes both advanced economies and developing countries. 32 of our members are small states, including many island nations.

Member governments agree to shared goals like development, democracy and peace, values and principles expressed in the Commonwealth Charter.

LGBTQ+ campaigners are urging the Commonwealth to decriminalise same-sex relations, prohibit discrimination based on sexual orientation and gender identity, and enforce laws against threats and violence.

They are also urging member nations to protect LGBTQ+ people from hate crime, and to consult and dialogue with relevant organisations.

“In parts of one Commonwealth country, northern Nigeria, there is the death penalty for homosexuality and three alleged gay men have been recently sentenced to death by stoning after an unfair trial,”  added Tatchell.

“The criminalisation of LGBT+ people is in defiance of the Commonwealth Charter which these countries have signed and promised to uphold. It pledges equal rights and non-discrimination to all Commonwealth citizens.

“The Commonwealth is a homophobic institution. It is a bastion of anti-LGBT+ laws, discrimination and hate crime. LGBT+ issues have never been discussed, not even once, by Commonwealth leaders at any of their summits over the last three decades.​

“The Commonwealth Secretariat colludes with homophobia. It has sold out LGBT+ communities across the Commonwealth. The Secretary General, Baroness Scotland, has shown no leadership; failing to speak out publicly against the current intensified persecution of LGBTs in Ghana, Cameroon, Nigeria and Uganda.

“I have tried for 30 years to get the Commonwealth leader’s summit to discuss the criminalisation of LGBTs by 62% of the member states. They refuse and also reject dialogue with their local LGBT+ communities.”

“Millions of LGBT+ people living in Commonwealth nations have no legal protection against discrimination in employment, housing, education, health care and the provision of good and services. This makes a mockery of Commonwealth values and the human rights principles of the Commonwealth Charter.”

The Birmingham 2022 Commonwealth Games are being held between Thursday 28 July and Monday 8 August, with the opening ceremony beginning tonight at 7pm.