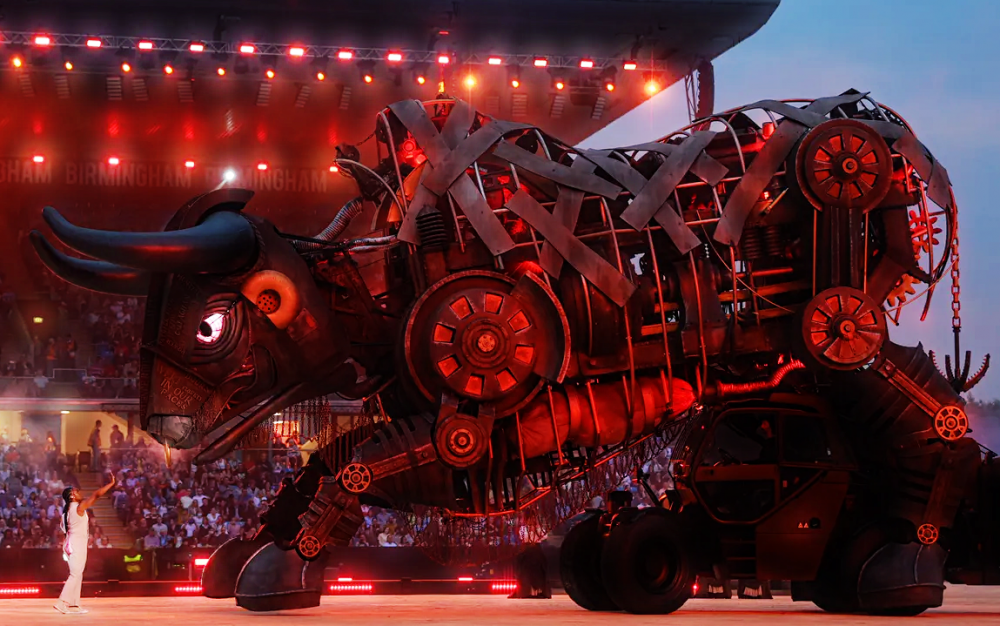 The audacious multicultural opening ceremony of the Birmingham Commonwealth Games 2022 thrilled with a show that dared to look at the dark past while looking forward to a positive future.

Thursday night’s show threw a subtle, yet profoundly moving, spotlight on the horrors of colonialism, slavery and homophobia, while looking forward to a more hopeful and tolerant future.

The Birmingham 2022 sporting event is finally here, and the opening ceremony, which took place at The Alexander stadium on Thursday (28 July), stormed ahead with daring themes which subtly educated and delighted using a celebratory tone.

The powerful story of Birmingham, a city built by the blood, sweat and toil of generations of immigrants, was told through the form of music, drama, and beautifully choreographed dance.

This opening ceremony had it all – fireworks, music, speeches, comedy, drama, and dancers.

Local people in Small Heath, Bordesley Green, Perry Barr, Alum Rock, Saltley and Ward End even heard the roaring engines of the Red Arrows as the legendary jets flew towards The Alexander Stadium for a colourful and exciting display across the night sky.

As the skies of Birmingham dimmed and darkened, and twilight loomed in, the opening ceremony commenced with a powerful plea for unity in divided times: “In times of darkness, we carry a dream of light that calls us all to gather.”

This dream of finding light during dark and turbulent times was a major component of the opening ceremony, and the ideal was conveyed throughout the night by the musicians, performers, and guest speakers.

Malala Yousafzai, the internationally renowned activist and Nobel Peace Prize laureate from Birmingham with Pakistani heritage, made an unexpected appearance at the opening ceremony which surprised and delighted the audience at the packed-out stadium.

Yousafzai’s speech at the Commonwealth Games 2022 opening ceremony, about the value and importance of education, especially for girls, was received in a hushed manner by the crowd.

At the climax of her impassioned and heartfelt speech the stadium erupted into the loudest applause of the night.

Continuing the theme of education, and extending it to the theme of tolerance and acceptance, Queen’s Baton Relay carrier Tom Daley (the first British diver to win four Olympic medals) took to the vast space of the stadium and gave an important speech about dismantling discriminatory LGBTQ+ legislation across the Commonwealth nations and territories.

Daley called for an immediate end to the malicious treatment and persecution of LGBTQ+ people in nations where such relationships remain a social and cultural taboo and are often punishable by death.

The Commonwealth Games, unlike the Olympics which forbids any protests from athletes, will allow competitors to articulate their concerns about political and social injustice without fear of censorship or penalisation from officials.

The themes of the show were delicately balanced between dark and light, rage and joy, and between the past and present.

Ginny Lemon, from RuPaul’s Drag Race UK, arrived in a comedic yet spectacular fashion to the night’s proceedings via a yellow hot air balloon. Their colourful and zany makeup resembled that of Johnny Depp‘s Mad Hatter.

Lemon’s eccentric performance included a song which celebrated Birmingham’s innovation and contribution not only to the UK but across the world.

From the bright joyful colours of Lemon’s session the stadium suddenly became dark and ominous as a gigantic animatronic bull entered the arena with steam billowing from its flared nostrils.

The black velvet cloak of the night was replaced by an infernal red glow that seemed to reflect the fires of the coal mines and furnaces of the Black Country where working class families toiled from morn to dusk for a pitiless and thankless existence.

The dark and dank pollution churned out by the fetid mills was referenced with the way the mechanical bull belched out steam that shrouded the arena like a creepy Victorian fog.

The rusted metal surface of the bull poetically mirrored the decay and rot of the British Empire, and the chains coiled around the bull metaphorically represented the Slave Trade where millions of African people were shackled by chains made in Birmingham’s metal workshops and transported to the New World to suffer the inhuman barbarism of slavery.

50 women pulled the chains and dragged the bull across the arena to highlight the hidden history of Birmingham’s women chain-makers who produced the chains during the Industrial Revolution that were used in the Slave Trade.

The head of the bull sculpture was etched and embossed with thought-provoking words such as “Power”, “People”, and “Slave”.

Although it seemed at times the bull hearkened to the Biblical golden calf, or even Wicca rituals with pagan druids forming a circle during Summer Solstice, this Birmingham bull was not an object of idol worship. This bull was a potent symbol of the working class, the downtrodden, the exploited and the enslaved. Even the tail of the bull was a dangling ship’s chain, possibly a slaver ship, that ended in an anchor with jagged teeth.

The red raging eyes of the noble looking bull reflected the anger and resentment felt by those robbed and sold into a degrading life of slavery and torture. A strong, once free creature, now held captive and transported and forced to work in horrific conditions in faraway foreign fields.

The women, who in turn are also oppressed by a patriarchal social system that sees them inferior to men, finally break free from the chains and this in turn allows the bull to taste freedom.

The fiery bull finally finds solace when female energy, in the form of a dancer, calms its unbalanced soul with love, healing and hope.

The beast weeps tears of blood, and the anger inside him fades and subsides to be replaced by light. His raging and fiery eyes drain away the red colour of hatred and light enters, clearing his vision and setting him free. His new found faith affirms life and a new dawn beckons.

The transformed and refreshed ‘skin’ of the bull was in keeping with the “Forward” motto of Birmingham, which is visible on the coat-of-arms crest of the city. The concept of changing, of adapting to a new challenge and moving forward, has kept the city vibrant and exciting over the years, and the change in the dynamics of the animatronic bull emphasised the courage of Birmingham to keep moving towards a brighter and better future regardless of the uphill struggles.

The designer behind the animatronic 10m high bull, which is operated by 6 people, is Michael Dollar from Scotland. He created the bull from rusted scrap metal from Birmingham and West Country factories rather than using new materials, which is in keeping with the radical themes of the show which includes the concept of recycling.

The theme of diversity and unity continued with guest presenters such as Lenny Henry, comedienne Shazia Mirza and BBC Asian Network presenter Noreen Khan, welcoming the teams of athletes from the 72 nations and territories taking part in the sporting event.

Steven Knight, executive producer of the opening ceremony, delivered a coy and fun nod to his Birmingham set Peaky Blinders drama series about a family of gangsters from Small Heath.

Knight kitted out some of the volunteers at the show with Edwardian style waistcoats, trousers and the iconic flat caps worn by the Peaky Blinders while a group of performers took to the parade with guns that oozed out bubbles rather than bullets which made the audience roar with laughter.

Iqbal Khan, the artistic director of the opening ceremony, who was born in Small Heath to Pakistani immigrant parents, cited that he could see parallels between the shaping of the city of Birmingham – which is built upon the hard work and efforts of generations of diverse communities – and his own personal experience growing up in Great Britain and imbibing the values and beauties of other cultures which ultimately helped to enrich his own outlook on life.

Khan hopes the the audience watching the show, either during the live event at The Alexander Stadium in Birmingham, or via television coverage beamed into homes across the country and the globe, will be receptive to the message of hope, light, love and unity.

These vital seeds, Khan hopes, will germinate and one day flower into a more unified community that is built and nourished by a shared humanity.

The key thing in this ceremony, says Khan, was to add emotion to an opening ceremony, and more importantly, to showcase multicultural working class stories that are often overlooked.

Khan also said the opening ceremony was his “love letter to Birmingham”.

Jazz artist Soweto Kinch, who plays the saxophone and lived in the Hockley area of Birmingham, also performed during the ceremony.

Kinch hopes the Commonwealth Games 2022 will act as a platform for honest dialogue about Britain’s controversial colonial past.

He feels the time has come to finally address the untold stories of black and South Asian people, whose tales and contributions to life in Great Britain have for too long been “brushed under the carpet”, and hopes people will look beyond the stereotypes presented in antiquated and musty history books written by historians with colonial leanings.

The action-packed opening ceremony also included special performances from a vast choir, acapella group Black Voices, vocalist Ranjana Ghatak, Tony Iommi from Black Sabbath, dancers from Birmingham Royal Ballet, and members of the City of Birmingham Orchestra under the baton of conductor Alpesh Chauhan whose work with the Birmingham Opera Company has received rave reviews, and a whole host of other artists in an epic show that ran for over 3 hours.

The spectacular evening of the opening ceremony finally came to a musical climax with Birmingham band Duran Duran taking to the stage to belt out their smash-hit songs from across the decades as fireworks lit up the night sky in a blaze of colours that symbolised diversity.