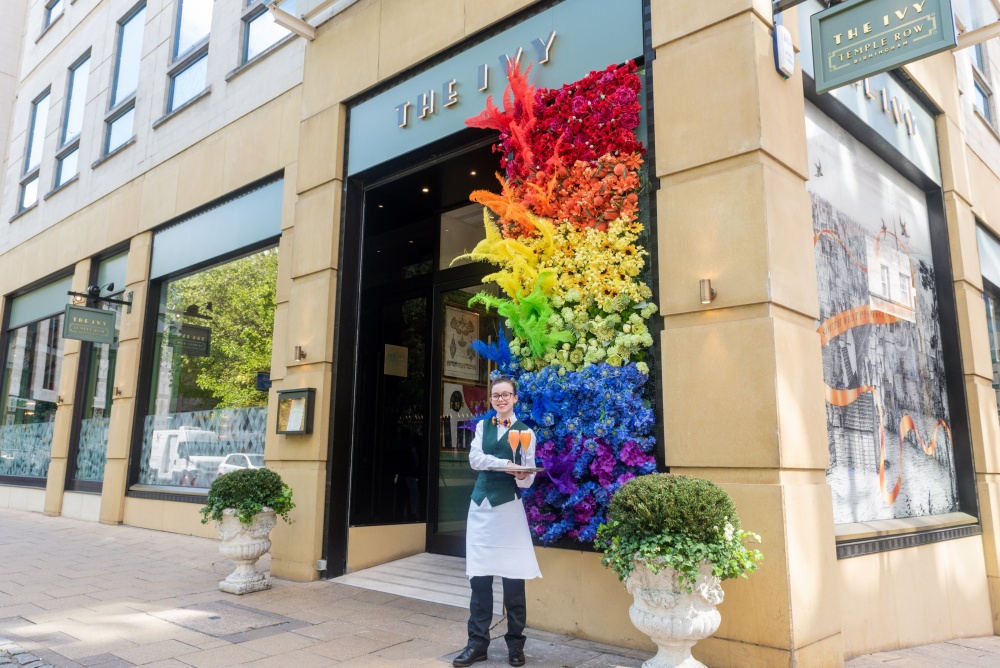 As one of the city’s most talked about restaurants since opening last year, you could imagine my excitement to be invited along to the Ivy Temple Row to sample their menu and Pride themed cocktail.

The iconic restaurant has welcomed in A-listers and the general public alike for 100 years, with Birmingham finally gaining their own branch in 2018. Their selling point: hearty food in a luxurious setting with the service to match.

Ahead of Birmingham Pride, and Pride month, the restaurant installed a beautiful 10ft, rainbow flower display on its exterior in support of the celebrations. Paying homage to the iconic Pride flag, the restaurant aimed to do something subtle, but elegant, to share the festivities with guests and passers-by alike.

In addition to their 10ft display, the bar managers also crafted a limited-edition Pride themed cocktail for guests to enjoy. The gorgeous cocktail, features a delicious blend of Sauternes, Campari, Flor de Seville and egg white, complemented by lemon and orange juice, and finished with a spoonful of sweet orange marmalade.

I must admit, I had no idea what to expect from this, but it was truly divine. I’m a Long Island boy myself but the array of complimentary flavours in the Pride themed cocktail may change this! Speaking to the staff here, I was very interested to know the reasoning behind both the display, and the cocktail.

Speaking to Liz Burton, general manager of the Ivy Temple Row, she shared, “Pride is one of the most anticipated events of the year and certainly helps make Birmingham so special. Since opening, we’ve been committed to contributing to the area in which we sit, including donating to local charities and partnering with cornerstones of the city where possible, such as Pride.

“Our floral rainbow installation received fantastic feedback from passers-by, and we hope we’ve helped to spread celebrations far and wide.”

I must admit, I was very sceptical about the display and the cocktail as I do find it frustrating to see businesses capitalise on queer people during the month whilst doing very little to uplift these same people throughout the rest of the year. In terms of visibility, the Ivy Temple Row, like many businesses, have, of course, nailed it. Their commitment to donating to local charities though reaffirms a wider commitment of support.

One of the largest selling points for the Ivy Temple Row is that it pays homage to old fashioned dining. Modern, high-class food isn’t this restaurants ambition or goal.

In this, guests are treated to an extensive, broad menu that is as easily decipherable as it is tasty. Joined by my good friend Josh, where together we are Josh², we were taken to our seats – eager to see what was on offer.

The starters list was incredibly extensive, and surprisingly affordable, ranging from duck liver parfait to steak tartare. Deciding to be a little adventurous to my normal choices, I choose the lobster and samphire risotto garnished with basil.

This starter was truly fantastic. The lobster was beautifully done and the arborio risotto rice was full of flavour. As I’m a big fan of a more basic risotto, mainly due to my uni lifestyle, I was a bit worried that one would overwhelm the other, but I needn’t have worried as they complemented each other beautifully.

Josh opted for the oak smoked salmon serviced with black pepper and lemon with dark rye bread. Judging by the smile on his face and the empty dish, you can bet he enjoyed it too.

For the main course, the menu, again, is extensive and offers something for every taste. From crab linguine to their famous Shepherd’s Pie, there is a meal for everyone here.

After much deliberation, to which Josh would roll his eyes begging me to make a choice, I went for the minute steak – grilled thinly-beaten steak with peppercorn sauce, onions, thick cut chips and watercress.

I was pretty excited for this as it’s not often I have steak although I do really enjoy them. After such a fantastic starter, my expectations were quite high, and I must admit I was a little bit disappointed.

The steak was a little too bland for my liking and my favourite part initially was actually the chips. However, stealing a little bit of Josh’s truffle, infused parmesan, I found that this gave it the extra flavour it needed. Whether this is a good thing, or a bad thing, I couldn’t say. The truffle infused parmesan atop the minute steak gave it some flavour that I really expected.

I was a bit bitter, I must say, when Josh chose the chicken Milanese – a brioche-crumbed chicken breast with San Marzanino tomatoes, capers, rocket, Parmesan and pesto. The presentation of his meal was phenomenal, and it smelt delightful. It looked, and tasted, like a gourmet meal as, of course, I had to steal a forkful off his plate.

The dessert menu was quite limited compared to the rest of the extensive menu. Consisting of 6 choices, I was initially a little confused as to why they’d limit themselves at the final hurdle. After eating my start and main course, however, I realised I had very little room even if they had offered the most amazing of deserts.

Content, and quite full, we both opted for the chocolate bomb – a melting chocolate bombe with a vanilla ice cream and honeycomb centre with hot salted caramel sauce.

Now, we’ve all seen the videos of these on those food channels on Facebook and Instagram and let me tell you, it did not disappoint. It was absolutely fantastic and the perfect way to end a wonderful meal.

I must say, the Ivy Temple Row surpassed my expectations and I thoroughly enjoyed my visit there. In addition to the food being brilliant all round, and reasonably priced for the type of eatery it is, the service provided was unlike anything I’d seen before.

Our host, who had only been there a few months, was absolutely amazing. Our drinks were never empty, even the littlest of requests were acted on with urgency and her recommendations all evening were spot on.

Interestingly too, anything we asked in relation to the food, or the specific sauces/complements, she had an extensive answer for which made the experience even more enjoyable. She deserves the utmost praise for her service and is a testament to the restaurant.

Overall, the Ivy Temple Row sticks true to its guns in providing excellent service, with beautiful food in a luxurious environment. The best thing, in my opinion, is that it lacks that almost pretentious vibe you get from similar restaurants. It knows it’s audience. It knows it’s strengths. And it definitely excels in this area.

Should I have to give it a rating, I would give it a strong 4out of 5 stars. However, the fantastic service we received easily makes this a 4 ½ out of 5.