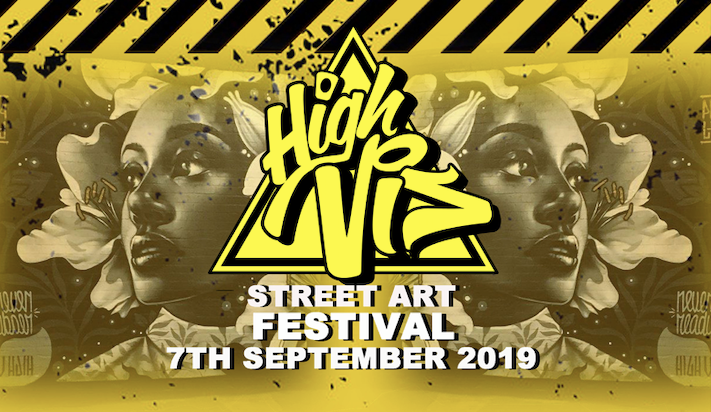 Birmingham’s street arts and culture festival, High Vis Fest, returns for a second year this September 7th.  And, once again the intentions by the organisers – of which, I admit to being one – is to flood Digbeth’s Zellig Car Park, the Custard Factory and the beyond with all new artwork.

Artwork by some of Birmingham and Britain’s most talented artists. After all, graffiti and Digbeth have been synonymous with one another since that seat of this modern art movement which, in recent years, has become a far more established, and legal art form.

As part of this years remit, we’re hoping to pair off more established artists with younger up and coming artists to learn the trade first hand. We’re also offering kids free workshops too across the day and we’ll be announcing our first ones shortly, so do keep ’em peeled across social media to keep up to date on announcements and events.

Our workshops will cover a great deal of the arts, with anything from comic book workshops (run this year by The Beano’s and Birmingham’s very own Laura Howell) to graffiti workshops. We’re working on more even now.

With over 2000 visitors last year, we’re hoping to continue to shed a spotlight on, arguably, Birmingham’s most dedicated artistic community and provide a day of live art, workshops and live music, to name but a few of the events we are planning for the day.

We are also hoping to see our annual celebration of street culture becoming a rolling programmed of pop-up events all around the city to support and nurture artists with varied events we’re currently planning.

We have big plans to promote the grass roots arts and up-and-coming creators in our city and this but the first clumsy steps we are taking in this direction. For example, we’ve already had our first pop-up photography exhibition bringing the amazing photos from Andy ‘Colatron’ Smart to a larger audience thanks to the support of local business The English Breakfast Club, who hosted the event. We even have support from bigger partners too.

As far as I know, we’re also the only street art festival that will be incorporating a decent sized bolt-on comic creators corner (Comic-con sounds too grandiose, and too corrupted a term these days too) with several DC, Marvel and 2000AD creators who hail from Birmingham, supporting the show. I bet you didn’t know so many creators lived locally? Another reason to shout and scream about the seemingly bottomless well of talents that call Birmingham their home.

Where else are you going to get the chance to bump into an artist from The Boys (John McCrea), 2000AD (Phil Winslade) as well as the current Comics Laureate (Hannah Berry) and watch some amazing artwork – from over 60 street artists – materialise over the day, while sipping a drink or two from our partner venues The Old Crown, The Ruin and The Engine Room, which will be hosting this year’s afterparty.  An after party that’s free and headlined by none other than The Nextmen! Oh, and we’ve got word that a certain Foka Wolf will be prowling too. Keep an eye out for Birmingham’s premier mischief maker.

Another aim this year was to think bigger and bolder, and we think we’re heading in the right direction. For example, National Express have given us a boost in a national competition that we helped launch. ‘Driving Design‘ will see the winning art entry emblazoned on one of their coaches it travels up and down the highways and byways of Great Britain. With a cash prize attached, that’s a pretty great splash one lucky artist will be able to make, we hope. As I write this, I believe the winner is only days way from being announced.

This city is a hub of creativity and street art is one of it’s major subcultures.  They say you’re never less than ten yards away from a rat. Well, in Digbeth, you’re never ten yards way from someone setting up a photoshoot with street art as their backdrop. Street artists bring a lot to Birmingham, and it should be something to not only celebrate but to venerate. Many still paint for the love of it, not the financial reward many deserve. Hopefully, we aim to support the artists in taking their work to the next level and painting for something more that exposure. After all, exposure doesn’t pay the bills, right?

Do come down and support this free festival and catch us over the next few weeks at the following venues and ask us more about this year’s festival. More than happy to chat over a pint or two.

Catch some of our artists live drawing on the CASS Arts windows and brighten up your shopping experience.

Catch us at this popular retro-gaming event as part of Digbeth Dining Club and kick off your Bank Holiday Weekend in style as we present a series of artists painting across the day and evening for your entertainment.

Promoting this year’s #DayofDredd celebrations on September 7th, we’ll be drawing a Dredd themed piece across the day and promoting our High VIs Creators’ Corner

Tabling at this year’s festival, we can keep your rugrats entertained with canvas art, colouring and more throughout the weekend.

Revealing a brand new mural from street arts’ legend, N4T4, upon the walls of the National Express, we’ll be taking over The Anchor and offering up a drink and draw event inspired by the rich heritage of Birmingham. From Black Sabbath to Steel Pulse, we’re hoping you’ll be inspired to get involved ahead of this year’s festival only two days later.