INTERVIEW: Social media sensation Charity Shop Sue – when will she return to Bulwell? 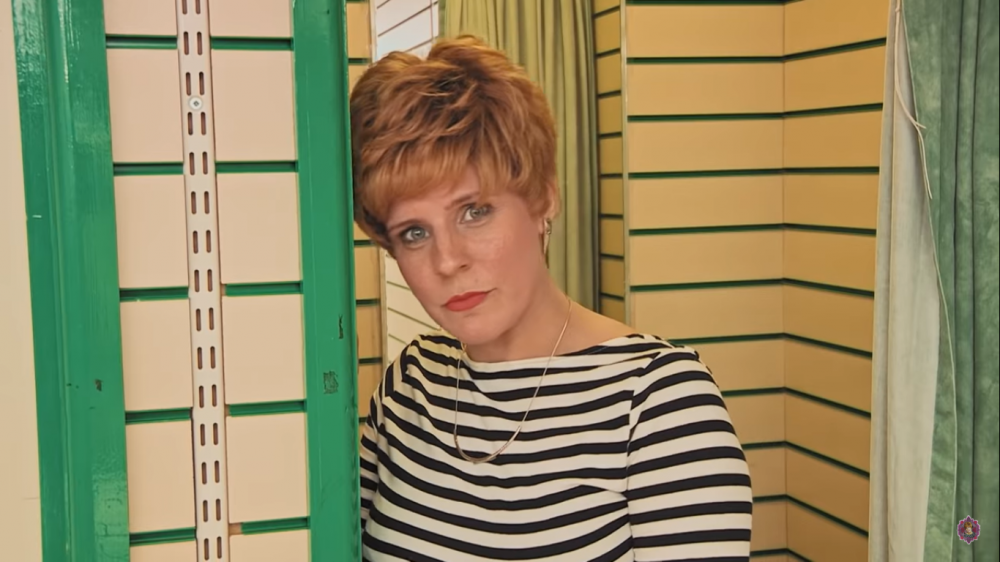 For those of you who have been living under a rock, Charity Shop Sue is a new staple in British comedy, having swept Twitter and YouTube users by storm this past year.

Set in Bulwell Shopping Centre, Nottingham, the series follows eponymous Sue Tuke  – played by Selina Mosinski – and some local volunteers on the bizarre antics which occur in their branch of a chain of charity shops, Sec*Hand Chances (clever name, right?).

Envisioning great things for her branch, Sue breathes her philanthropic energy into a series of filmed fundraising activities, in the hope of raising the shop’s profile.

Such events do not always go to plan, though, with Sue’s “Antique Hunt” (yes, really) raising a mere £35. “That took me five weeks to prepare… that’s £5 a week!” she is heard exclaiming to volunteers Vera and Viki.

The series even comes with its own soundtrack: the “rot test challenge”, orchestrated by (yes, you guessed it) Sue, is accompanied by its own catchy song with the hilarious lyrics that it will “change your life”. Give it a watch if you want to instantly bellow with laughter.

Then there’s Sue’s tips on how to run a charity shop. There’s a moment when Kersch asks why there are X-rated books in the fridge. As if the answer were obvious, Sue tells her “these books are steaming hot… they need cooling down”.

Filming began in 2014 before ceasing two weeks ahead of schedule, due to fear that the releasing of the footage would tarnish Sec*Hand Chances’ reputation.

By the time the series comes to an end, and Sue’s final words are superimposed on the screen, you can’t help but feel emotional. The final song, “Make Good Things Happen”, is such good pop it deserves a spot on the UK Top 40, or at least be on Spotify.

Now, it seems as though the LGBTQ+ community have elevated Sue to that of cult status. Her socials now have tens of thousands of loyal followers, and some of her YouTube clips have over 100,000 views. Celebrity endorsement has come from Vicky McClure, who took part in a special Christmas edition of the show – I think I’ll leave you to find out what happens in the end.

Figures from the LGBTQ+ community have also spoken out in support. Madonna has recognised the hilarity of Charity Shop Sue on her Instagram stories. TV personality Rylan has spoken of his passion for the show, and RuPaul’s Drag Race favourite Shea Coulee can be seen in the beginning of Sue’s YouTube series, screaming “‘Scuse me, lady, you’re supposed to be on the bloody till!”

So without further ado, here is the conversation I was lucky enough to have with our very own Bulwell hero.

Ben: What brought you to the role of Charity Shop Manager?

Sue: It was my calling… it took a lot of love, tears and elbow grease.

How are the volunteers Vera, Viki, Kersch and Gloria?

To be honest they are doing well but have really tested my patience in recent weeks.

What do you get up to in your spare time?

I love a long read in the bubble bath. At the moment, I’m reading a great book about Jack the Ripper.

What was the biggest break in your career?

Working in Paris in one of the biggest fashion houses – I won’t name names – but it was haute couture.

So who would be your dream customer?

Baroness Michelle Mone – we could talk about business, styling and work together on a new design for a sustainable bra!

Finally, have you heard anything from Vicky McClure since the event she did at your shop?

It was awkward for a while but I’m still trying to get a “Naughty Notts Gals” calendar off the ground with her.

How does it feel to have a cult LGBTQ+ following?

It’s a connection that is very special and I don’t know quite how to describe it. I feel love and I hope they do too.

Can we expect more of Charity Shop Sue in 2020?

If the right people pull their fingers out their arses then hopefully we will!

(Visited 6,369 times, 1 visits today)
https://www.iambirmingham.co.uk/2020/02/12/interview-social-media-sensation-charity-shop-sue-will-return-bulwell/https://www.iambirmingham.co.uk/wp-content/uploads/2020/02/Sue1-800x450.pnghttps://www.iambirmingham.co.uk/wp-content/uploads/2020/02/Sue1-300x169.png2020-02-12T15:51:20+00:00Ben HouseBrumFeedCharityComedyEntertainmentNewsShowbizWhat's OnWomxnBen House,Bulwell,Bulwell shopping centre,Charity Shop,Charity Shop Sue,Comedy,Entertainment,I Am Birmingham,Interview,LGBT,LGBTQ,Nottingham,Sec*hand Chances,Selina Mosinski,Showbiz,Social Media,Sue Tuke,TV,Twitter,Vera and Viki,Viral,Viral Videos,web series,YouTubeFor those of you who have been living under a rock, Charity Shop Sue is a new staple in British comedy, having swept Twitter and YouTube users by storm this past year. Set in Bulwell Shopping Centre, Nottingham, the series follows eponymous Sue Tuke  - played by Selina Mosinski -...Ben HouseBen House[email protected]AuthorFreelance PR practitioner, journalist and copywriter Ben has been involved in many different projects, whether in showbiz or philanthropy, and is able to turn them out into engaging copy for social media and press releases. He has remarkable communication skills and media relations, with many notable figures in the LGBTQ+ community having been exclusively interviewed by him. With a Bachelor's in English and a Master's in Public Relations, he is looking to flex his PR acumen further for arts and events in the West Midlands.I Am Birmingham
« 15 weapons and drugs worth £300,000 seized in Wolverhampton crime crackdown
12th February 1965: The day Malcolm X came to Smethwick »