REVIEW: BBC hit sitcom This Country comes to a close 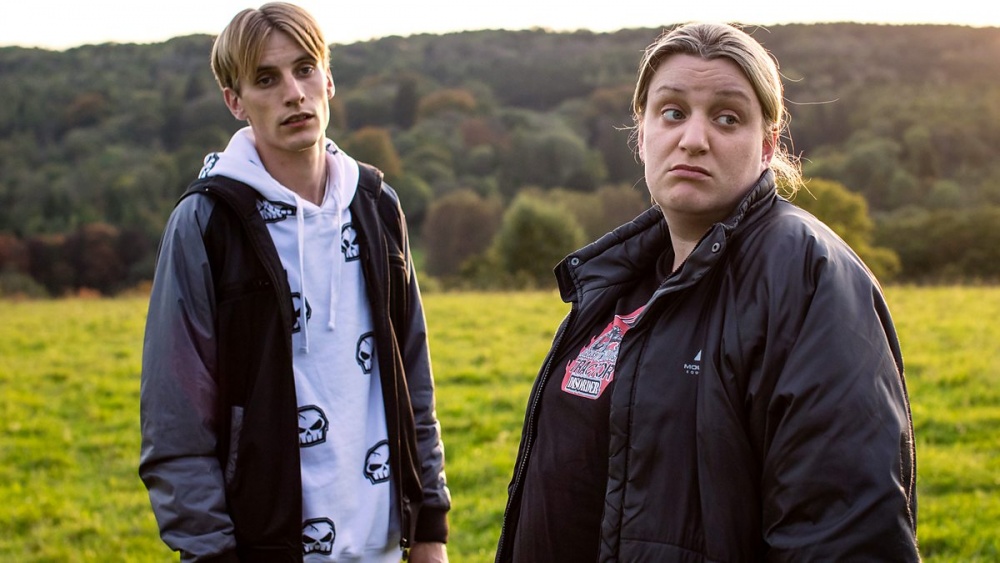 Charlie Cooper and Daisy May Cooper as Kurtan and Kerry Mucklowe (Photo: BBC)

It’s been three years, now, since mockumentary This Country began on BBC Three. It was so low-key, but I remember seeing an advert for it on Facebook, and it actually made me laugh. And I have a very dry sense of humour.

The full-length episodes did not let me down – I will never forget Kerry Mucklowe’s absolute astonishment at the plummeting of plums at her house – “There’s nothing left that hasn’t been plummed!”

Co-writing sibling duo Charlie and Daisy May Cooper’s method of humour has remained unchanged over the three seasons, much to the show’s success. I also think you have really concentrate to actually understand the implicit satire that lies in the subtext – but as soon as you get it, you’re laughing throughout.

Whether having full-blown fights over a tiny nub of cheese, or waiting for hours on end at a train station for the vicar (Paul Chahidi) to come home, their lives are a far cry from their metropolitan counterparts’ in the UK. Kurtan summarises it quite simply – “I want to be going clubbing, doing drugs, getting with girls.”

So, as the UK witnesses this mockumentary become a cult classic (rights have already been acquired for a version in the States. Hooray!), Daisy and Charlie get to shed some personal light on the type of childhood they, and many others, had.

Not only does their writing reflect intelligence and ambiguity, their acting skills live up to it too. Maybe I’m a bit stupid, but I did have a moment at the beginning where I wondered if it was actually real.

Yes, this is partly because they have actually lived the lives they’re acting out, and partly because Daisy has acting background, but that’s not to say it’s any less impressive. To come from complete obscurity and deliver the unbelievably believable performances they did deserves praise, hopefully in the form of more awards.

It’s also not to say that the rest of the carefully crafted cast of This Country are any less part of the show’s success.

Fellow village resident Mandy (Ashley McGuire) is as scary as she is to laugh at, and gets MVP on multiple episodes. When she empathises with Kerry’s potential stalker situation in season 2, it’s not in the way Kerry would have hoped. “Oh, no, I wasn’t being stalked. I was the stalker,” she drops in without a care in the world, much to Kerry’s horror.

And the very humble reasoning behind their decision the end the show only contributes towards to the authentic charm which the show possesses.

Daisy told Radio Times: “The difficult thing now is that we can’t be anonymous anymore. We can’t go to the pub anymore like we used to and just watch or listen to people, and writing the third series we definitely didn’t have so many of those unique bits.”

It gives me confidence in the longevity of the show’s legacy: Charlie and Daisy seem to know the recipe for the show’s success, and obviously they feel the time is right for the show to end.

The very last episode aired Sunday (March 29), and the cricket noises over the typical Cotswold greenery signal that, in three years, nothing has changed, and perhaps never will.

“Oh when the Heinz comes marching in…” Kerry chimes, with the utmost glee you could imagine. You’d think she just won the lottery, not have received a “generous” Harvest festival donation of a branded tin of beans.

“THIS is why I do Harvest festival – the atmosphere,” and she looks to the rather empty-looking hall, as if it’ll carry her statement.

Herein lies the multifaceted genius of This Country: with every bellow of laughter comes a sting of sympathy. While the writers beckon you to laugh at how explicitly pathetic their characters’ lives are, they want to show that the life they are representing is an actuality.

The ultimate episode has many golden moments which, as an avid fan, seem out of the ordinary. For example, the audience learns through the Vicar that he is leaving the village before Kerry and Kurtan do. Cue impending doom.

He arrives at Kerry’s house, and there is an interaction between the Vicar and Kerry’s mum (who is never seen, and is also voiced by Daisy) for the very first time. As little as that may seem, it really adds to the momentous tone of the episode. The Vicar hopelessly hints to the on-screen cousins that he is leaving and, tragically, they simply won’t catch on. When they do catch on, they aren’t happy.

The episode is so touching. And funny. When the Vicar offers Kerry the seemingly prestigious role of Lord of the Harvest, the look of unworthiness she unknowingly flashes is adorably priceless. This really means a lot to her.

And it makes me think – what must be the positives of living such a simplistic life? Being easily satisfied? I’m sure we could all do with a bit of that sometimes.

But perhaps Kerry takes the whole Lord of the Harvest thing too far: “I am the Princess Diana of the Harvest. I’ll kiss baby’s heads, and I’ll cut ribbons for new businesses.” Please no one burst her bubble!

The highlight of the episode comes when the Vicar shouts angrily at annoying resident June and Kerry gives a look to the camera as if he’d decked her.

Overall, it’s a fitting ending: there are no bells or whistles, just the Vicar leaving the village. And, what with all the farcical emotion, it will go down as another classic episode.

And with that, This Country ends. It doesn’t seem anticlimactic or overly devastating, though; Charlie and Daisy decided to end it whilst it was still good, ending it on-screen in a way which wasn’t strange. Shows like Prison Break should take note.

This Country series one to three are available to stream on BBC iPlayer.

(Visited 2,385 times, 1 visits today)
https://www.iambirmingham.co.uk/2020/04/07/review-bbc-hit-sitcom-this-country-ends/https://www.iambirmingham.co.uk/wp-content/uploads/2020/03/this-country-img-1-800x450.jpghttps://www.iambirmingham.co.uk/wp-content/uploads/2020/03/this-country-img-1-300x169.jpg2020-04-07T23:49:50+00:00Ben HouseComedyEntertainmentReviewsShowbizWhat's OnAshley McGuire,BBC,BBC comedy,BBC iPlayer,BBC Three,BBC3,Ben House,Charlie Cooper,Comedy,Comedy Review,comedy show,Daisy and Charlie,Daisy May Cooper,Entertainment,Kerry and Kurtan,Kerry Mucklowe,March 2020,mockumentary,Paul Chahidi,Review,Satire,Series 3,Show,Sitcom,Stream,This Country,TV,TV Review,vicarIt's been three years, now, since mockumentary This Country began on BBC Three. It was so low-key, but I remember seeing an advert for it on Facebook, and it actually made me laugh. And I have a very dry sense of humour. The full-length episodes did not let me down...Ben HouseBen House[email protected]AuthorFreelance PR practitioner, journalist and copywriter Ben has been involved in many different projects, whether in showbiz or philanthropy, and is able to turn them out into engaging copy for social media and press releases. He has remarkable communication skills and media relations, with many notable figures in the LGBTQ+ community having been exclusively interviewed by him. With a Bachelor's in English and a Master's in Public Relations, he is looking to flex his PR acumen further for arts and events in the West Midlands.I Am Birmingham
« 400 domestic abuse arrests made during coronavirus lockdown
Who’s performing at Lady Gaga’s ‘One World’ global telecast to benefit frontline workers? »