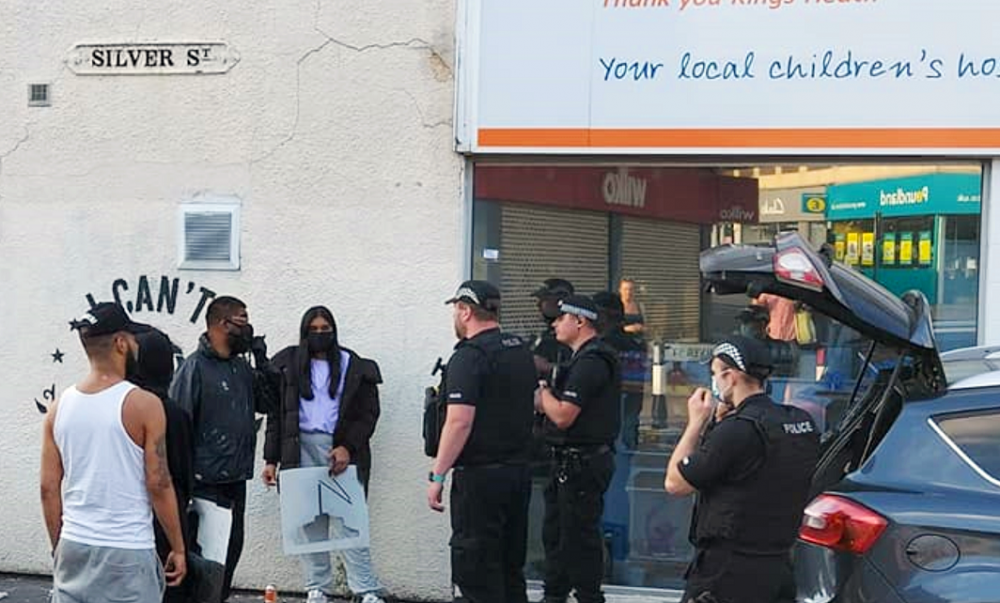 Birmingham City Council has issued an apology after a street art tribute to George Floyd was removed hours after being painted in Kings Heath by a Birmingham artist.

Mohammed Ali was deeply “saddneed and disturbed” when he discovered his street art tribute to George Floyd had been mysteriously removed. After investigating the issue he found out it was whitewashed and removed by Birmingham City Council.

The tragic death of George Floyd, who kept pleading ‘I can’t breathe’ as a US police officer brutally pressed a knee into his neck, inspired Birmingham-based artist Mohammed Ali to paint a tribute.

The startling and topical stencil was painted in the Kings Heath area of Birmingham on Monday night as an act of “solidarity” said the artist.

However, within a few hours the stencil had been painted over and removed.

Artist Ali said yesterday: “I am saddened to share news that less than 24 hours of its creation, the artwork highlighting the situation in the USA has been painted off.

Ali was suspicious about the sudden disappearance of his art and felt it might have been removed by the council.

He said: “Most likely it was the council that had it removed. They have the power to remove what they want even if it’s a privately owned building.”

Ali added: “This is baffling as there is so much that has no creative element to it that is just left there. I’ve never known them to act so quickly.

After investigating the issue and getting in touch with Birmingham City Council, Ali received a response which confirmed his suspicions.

Cllr John O’shea, Cabinet Minister for for Street Scene and Parks, said: “We unreservedly apologise for the removal of this artwork.

“Graffiti is a scourge in our city and the operative that removed it did so in good faith.

“There was absolutely no political motive behind this.

“However we accept it was wrong, are investigating how this happened and would be happy for this artwork to be repainted at this location.”

According to Ali the wall where he painted the George Floyd tribute was already covered in weeks old graffiti tags.

The council street workers, who are currently only carrying out emergency work during the coronavirus lockdown, had failed to remove any of the existing graffiti at that location yet they rapidly moved in and removed the George Floyd ‘I Can’t Breathe’ tribute.

Ali felt the removal was “targeted” and hinted it could be an attack on the freedom of expression.

In sharp contrast to the sudden removal of the George Floyd tribute art is the way authorities quickly moved in to protect and save the Banksy art that was painted in the Jewellery Quarter last Christmas. That art was quickly covered with a plastic sheet to protect it from being tagged, damaged, or removed.

“Your work speaks for all of those who see, recognise and oppose injustice.”

Ali was back at the location in Silver Street last night and repainted the stencil on the wall of the Acorns Hospice charity shop.

However, despite having official permission by both the owner of the building and the council a police squad car suddenly swooped in at the scene and three police officers confronted Ali as he finished painting his tribute to George Floyd.

Ali appeared calm and stood his ground, and explained the situation to the officers.

Ali later said: “That’s what happens when you suppress something. Don’t be surprised when it comes back stronger than ever.

“Even a group of police came but quickly moved on after they were told nothing to see here.”

He added: “After the whitewashing of ‘I Can’t Breathe’ artwork’ by Birmingham City Council (who admitted it was a ‘mistake’ and will be investigating) it was not only painted back, but added to four other neighbourhoods in Birmingham and projected onto a city centre building.”

Ali’s ‘I Can’t Breathe’ stencils, painted around several location in Birmingham, are getting attention from local people and the photos are being shared across social media.

The artwork is also being projected onto the wall of a huge building in Digbeth.

Suki10C, a live music venue in Digbeth, is beaming Ali’s ‘I Can’t Breathe’ projection onto a nearby wall for people to enjoy at night.

Every inch of the exterior of the Suki10C building is painted with a massive mural, painted by street artist Gent48, which features Birmingham’s rising black stars and creatives.

Gent48 recently painted a mural just up the street from Ali’s projection wall which highlighted the contribution of frontline keyworkers from Birmingham’s diverse communities as they battle against Covid-19.

David Whittall, owner of Suki10C, shared a post on Facebook and said: “The projection of this statement artwork by Mohammed Ali Aerosol will continue to be projected nightly.

“Please do like and share the image and as we in the UK do not have to suffer the experience of a military-backed curfew enforced by baton, tear-gas, flash grenades and the violent suppression of free speech and free press I urge you to visit the projection and take your own pictures to upload and share.”

After his experience with Birmingham City Council and the positive reaction to the George Floyd tribute from the Birmingham public, Ali vowed to continue using his art to “generate debate and bring about much needed change and understanding, and to unite communities”.