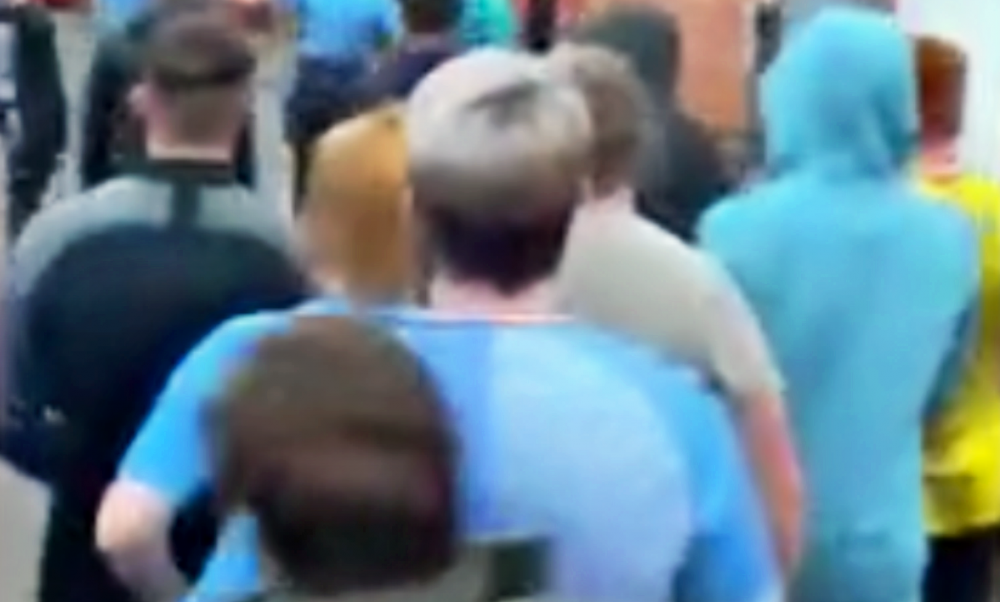 Five members of the mob that attacked two black men in Coventry have been questioned by police (Photo: Supplied)

Five yobs have been questioned by police following an appeal for information into the shocking mob attack against two defenceless black men in Coventry city centre last Tuesday (9 June).

Two men, aged 29 and 33, were arrested on suspicion of a violent disorder. They were later released on police bail pending further enquiries.

Two young black men were the “target of a violent attack from a large crowd” last Tuesday evening according to police.

Police have promised to “take action against offenders” who are identified as carrying out hate crimes following the terrifying attack against the two black victims in Coventry by a huge mob.

The shameful attack, with “racist elements” has provoked indignation and shocked the people of Coventry, and police are taking the matter more seriously after online criticism and anger from those who have seen footage of the appalling mob attack against two terrified men holed up in a dead end with no avenue of escape as glass bottles and bricks are thrown at them by the violent crowd.

Police officers arrived just as the horrifying attacks against the two lads were about to escalate.

Officers managed to escort the traumatized victims away from the scene in order to keep them safe from the hostile and jeering crowd.

On top of the two yobs already questioned by police in connection with this horrific incident a further three attackers were identified as a result of a police appeal.

The suspects were formally interviewed and released pending further investigation by detectives.

One of them has been questioned in connection with footage reviewed by detectives which shows deeply upsetting footage of an individual who is heard making a racist comment.

A police spokesperson has said this comment is being taken very seriously and forms part of the investigation.

The shocking footage of the attack also features some of the crowd of Coventry City FC in Broadgate Square destroying the Black Lives Matter placards at the base of the Lady Godiva statue with plans to start a “bonfire”.

Police have said that hate crime will not be tolerated.

The police spokesperson added: “If any further hate crimes are identified or reported we will take the appropriate action in order to bring the offenders to justice.”

Police have confirmed a silver baton that was seen in the mob attack footage has also been recovered.

Chief Superintendent Mike O’Hara, Coventry commander, said: “This kind of violence will not be tolerated in our city and I want to assure the public that if any hate crimes are identified we will take action against offenders.

“If anyone does recognise themselves get in contact now as we will be out looking for them at the forthcoming matches or they will get a knock on the door from us when they least expect it.”

Police have said that detectives working on this serious case are continuing to gather footage to identify all those involved in this alarming attack and for anyone with information to get in touch.

Anyone who has any information relating to this incident please contact West Midlands Police via Live Chat or ring 101. Alternatively, call Crimestoppers anonymously on 0800 555 111. Please quote log 3390 from 11 June.