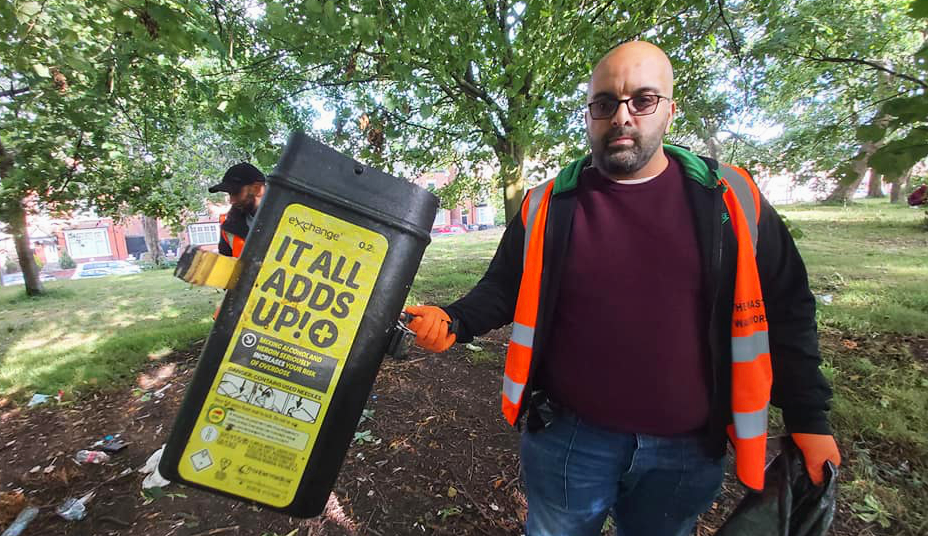 A team of valiant volunteers from Small Heath have removed a shocking amount of used heroin needles and other dangerous drugs related waste from the streets around Birmingham City FC and Small Heath Park.

This highly dangerous anti-social waste was removed last week after posing a serious public health hazard to children and families, including pets.

A tireless and brave Brummie team of volunteers from Small Heath continue their community cleanups to bring back local pride and make people feel safer by clearing up dangerous waste in public spaces across Birmingham.

A group called the Waste Warriors – who say its “an honour to be part of Birmingham” – have been conducting cleanup operations in Birmingham and the Black Country and removing dangerous and hazardous rubbish left behind by drugs related activity or by visitors to parks during the coronavirus lockdown.

The team were faced with some serious challenges during two recent operations when they collected dangerous drugs waste from Small Heath Park and from the streets around St. Andrews, the home of Birmingham City FC.

Ali Akbar is the team leader and founder member of the new community group which was formed to address the rise of anti-social waste in local parks.

The team, whose members are inspired by their Islamic faith, carry out regular cleanup operations in streets and parks in Birmingham which are plagued by leftovers from anti-social crime and disorder, including hazardous pharmaceutical material such as syringes and needles left by drug addicts.

Summer blues at the Blues ground

Ali spoke exclusively to I Am Birmingham about the team’s operations in Birmingham which took place at the end of June, telling us about the cleanup outside St. Andrew’s, the home of the Blues football team.

Ali, who hails from Small Heath, said: “On Friday 26th of June, three of the Waste Warriors decided to cleanup around the rear entrance of Birmingham City’s football ground.

“I’ve always been a lifelong Blues fan. My Dad is also a bluenose. So it was sentimental being close to the club I love and cherish.

“As a child I have seen many heroes put on the great Blues shirt and played their hearts out. And we are the loudest fans in the country.”

“The Waste Warriors team was surprised to see the amount of rubbish littered everywhere on St. Andrew’s Road.

“We were shocked at the level of anti-social waste such as alcohol bottles and hundreds of nitrous oxide canisters on the streets surrounding the Blues ground.

“We also noticed a criminal element in the area where we were working but we weren’t deterred. This is our city and we won’t be chased away by some thugs.”

Ali is concerned about the negative impact of this anti-social activity and the effect it has on young people.

Discussing the anti-social dangers, Ali said: “It is a big concern as there is a primary school opposite the football ground and drug abusers use the cul-de-sac sections for their activity without any care for local children or residents.”

Ali was also quick to point out the problem of litter and the impact it has on people and the environment is not exclusive to Birmingham.

He emphasised the wider implications around the litter issue: “The litter pick around St. Andrews wasn’t a big job but small steps can make really big leaps in the world.

“And the rubbish isn’t just a problem in Birmingham, rather it is a global one.

“Plastic poisoning is killing life in the seas, and wildlife on land is being hit hard too.

“Plastic never perishes and it becomes poison to the environment.”

A few days after Ali and the Waste Warriors had completed their operation around St. Andrew’s they turned their attention to another place that required urgent help.

Ali explained: “The Waste Warriors were receiving several reports about the litter in Small Heath Park near the Coventry Road end. On Sunday 28 June, we decided to send down our team.”

Ali talked about the history of the park and the personal connection him and his family have had with the park.

“Small Heath Park is a special park for me and my brother as we lived for around a decade in Tennyson Road which is directly opposite the famous park.

“Small Heath Park was once called Victoria Park and named after Queen Victoria, who visited the place for a grand opening in 1879.

“It gives me great pleasure to have lived so close to the park and built up so many positive memories over the years.”

Sadly, in recent times Small Heath Park has been hit by crime, anti-social activity, and an increase in dangerous waste being left behind by people.

There’s a long line of shops in Coventry Road directly opposite the park, and many of those shops are fast food outlets.

People, often families on an outing, purchase takeaways and then head straight into the park to tuck into their snacks. Many visitors fail to dispose of their trash responsibly and this leads to the litter problem which in turn attracts rodents.

Ali and the team were immediately met with a shocking sight as soon they arrived at Small Heath Park to carry out their cleanup operation.

Ali described the scene: “The dedicated team of volunteers decided to start the cleanup project from the Tennyson Road end and work towards the Coventry Road side.

“As soon as we entered the park it was like walking into a ‘drug den’.

“We were shocked and appalled by what we saw.”

He added: “There were literally hundreds of heroin needles under the trees near the corner of the park opposite the George & Dragon pub.

“Any child could have picked up those needles and suffered a serious and dangerous health hazard.

“It has to be the most dangerous drug abuse park we have come across from all the parks we have covered so far in our cleanup projects across the city.

“Some of the used syringes were hidden in the long grass which hasn’t been cut by the park services in ages.

“If a football game was played around here the children would be at risk. And pets too.

“Can you imagine a poor dog steeping onto one of these hidden needles?”

Ali is worried about the dangers posed by the dangerous drugs waste being dumped or discarded in Small Heath Park.

“Urgent action is needed to safeguard pets and their owners who use the park, and also the local wildlife,” he said.

The size of the task proved too vast for the volunteers but they bravely did as much as they could before the light began to fade and the evening rolled in.

Some of the rubbish collected in the park by the Waste Warriors included fast food wrappers, plastic cups, and the remains of picnics left behind by visitors.

Near one of the entrances into the park, a volunteer discovered a rusted tool which has the potential of being used as a weapon.

The random, and often dangerous, rubbish collected by the Waste Warriors team in Birmingham’s public parks is a cause for concern. Public health issues posed by these dangerous objects is very serious.

Ali said: “We covered a portion of Tennyson Road and Coventry Road sections of the park and the Waste Warrior team also went up towards the disused park keeper’s lodge but the light began to fail.

“We will revisit this park and we’ll be going to cleanup around the children’s area and towards the basketball court.”

Ali issued thanks to his team and reiterated his passion for Birmingham: “The Waste Warriors would like to thank Sarfraz, Seerat, Asif, and Mohammad for their hard work and effort during this challenging cleanup.

“They showed real determination and real courage, and they rose up to the challenge.

“These guys embody the spirit of Birmingham.”

The Waste Warriors originally only had two members when the team was formed but Ali said the numbers quickly grew as news of the team’s activities spread across social media.

Ali is proud of the achievements of the volunteers and he wants to instil passion and pride in local children, and to get parents involved in community projects.

Ali said the key Waste Warrior ethos is “to make people feel safer and to reclaim local areas from anti-social elements” and one of the ways to do this is by removing anti-social waste from local spaces used by the public.

He said: “It’s an honour to be part of this beautiful city. The Waste Warriors have been cleaning different parks and landmarks in Birmingham.

“We are doing this on a voluntary basis, and we know litter and anti-social waste poses big problems in our lovely city.

“If we all do our little bit for the community we can make a huge difference. We cannot just sit back and let things get worse.”

He added: “We are trying to create an awareness to all the people of Birmingham that this is your city and it’s time for everyone to make a contribution to society.

“Our children, and our community, deserves to live without fear and intimidation. We grew up in these streets and played in these parks.

“We will work together for a better future for us all regardless of race or background.”

The Waste Warrior team rarely sits down and rests.

The team is planning further cleanup operations, and are already looking to return to Small Heath Park and St. Andrews in the days ahead as coronavirus lockdown restrictions ease and more visitors are expected in parks and public spaces.

Ali sent out a message to all who have shown support to the Waste Warriors team: “We have a long way to go, and the summer will be a real test as more people come out of lockdown and start to ‘celebrate’ in parks.

“I hope parents pause a moment and teach children about health and safety issues when using parks, and to be vigilant for used needles and other dangerous objects hidden in the uncut grass.

“Be safe, have fun, and inspire the kids.

“Peace and love from the Waste Warriors. Keep right on!”