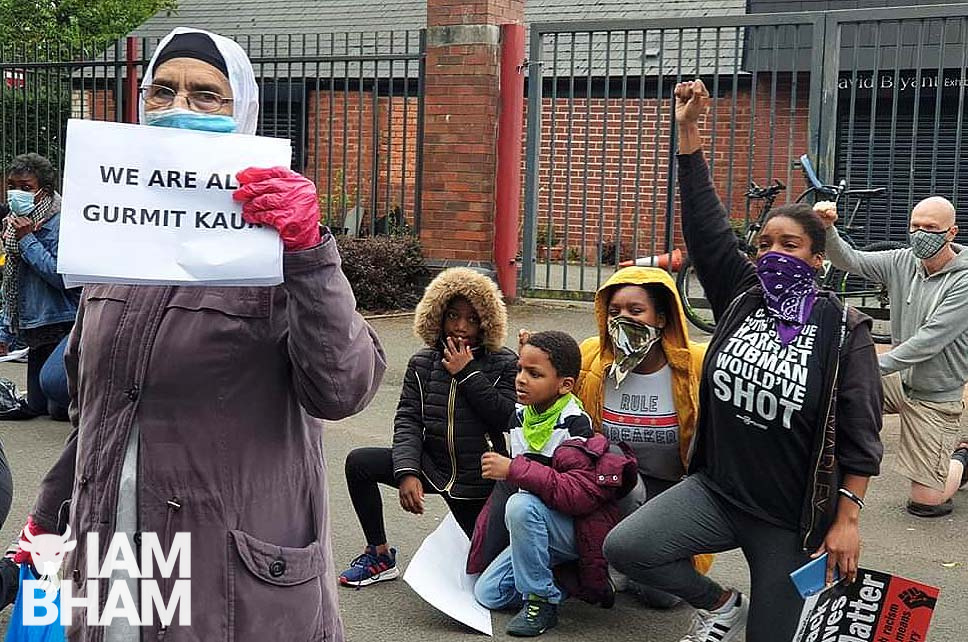 The Sikh tradition of Langar was embraced at a Black Lives Matter protest in Sandwell on Saturday, as residents came together to rally against racism and to defend a local elderly woman from threats of deportation.

Billed as Sandwell’s sixth Black Lives Matter protest in recent weeks, over 50 people gathered in Victoria Park to voice their solidarity with the movement which has seen a resurgence following the murder of George Floyd in Minneapolis in May.

The US killing has become a catalyst for a new wave of ongoing demonstrations across the world, pushing discussions of wider police violence, legal accountability and structural racism to the forefront of political discourse.

In Birmingham, several protests have been held to highlight and challenge discrimination against Black people and other marginalised communities, including a mass demonstration which attracted over 4,000 people.

For residents in Sandwell, a vigil and protest in Smethwick’s Victoria Park on Saturday (July 18) was the sixth such time they came out to show solidarity for civil rights, and a first for the park.

Previous rallies in the industrial town have included over a hundred people congregating on Marshall Street at the end of June, on the site of Malcolm’s X’s famous 1965 visit during racial tensions in the area. Local residents, including those who live in the home now bearing an official blue plaque in tribute of the American civil rights activist, came out to ‘take a knee’ and make a stand against racism.

During this weekend’s rally, organised by Stand Up To Racism Birmingham, young and old campaigners came together with colourful placards and banners in hand, chanting “Black Lives Matter” and “By Any Means Necessary”.

With anti-bacterial spray and sanitiser on hand, social distancing was being taken into account as a host of speakers took to the mic to discuss systemic racism and discrimination against black and ethnic minority populations.

Among them, 75-year-old Gurmit Kaur, who has been living in Smethwick for over ten years but with no immigration papers.

The elderly resident – who volunteers at her local temple providing food for the community – joined the protest, bringing with her bags of fruit to hand out to those attending – a food distribution practice known in Sikhism as ‘langar seva’.

Legally an undocumented migrant, the UK Government has told Kaur to go back to India in spite of her having no family there. Activists say she’s a victim of the government’s ‘hostile environment’ policy, echoing similar stories and experiences of institutional alleged state racism from the Windrush scandal.

Displaying ‘We Are All Gurmit Kaur’ signs at the rally, several protesters cheered Kaur on when her story was shared at the outdoor public event.

“While I was there I met a beautiful Auntie who was handing out fruit to protesters. Auntie’s name is Gurmit Kaur, she is 75 years old and her story is heartbreaking.

“Over recent years, Gurmit Kaur has suffered personal trauma and has lost everything including her home and family. To make matters worse she has now been informed by the Home Office that she has to return home to India, but her real home is here in Smethwick where she has lived since 2009 and has made a new life. She has no family to return to in Panjab.

“Today I am calling Gurmit Kaur my ‘Massi Ji’, she is our Auntie and she needs our help to ensure she stays in Smethwick.

During the protest, participants kneeled in memory of George Floyd and victims of police brutality in the United Kingdom and United States.

Foster, who is backing the Black Lives Matter movement and attended last month’s We Matter equality march through Birmingham city centre, said he joined the protest “to support Black communities in the West Midlands”.

“We must challenge structural social and economic inequality, bias, disproportionality, discrimination and racism.”

Quoting iconic American novelist and anti-racism activist James Baldwin, Foster added, “Not everything that is faced can be changed; but nothing can be changed until it is faced.”

Local resident Natasha Michael spoke at the protest, revealing she had been repeatedly racially abused online.

“Black lives matter to me because Black people don’t deserve to be treated as if we don’t feel pain, because we do and it hurts!

“Building up to this protest, I was heavily attacked on social media and told to shut up and go back to where I came from even though I was born here.”

“Public institutions belong to the people, it’s our responsibility to rid them of institutionalised racism.“

Salman Mirza from Stand Up To Racism Birmingham said:

“For us, Black Lives Matter has never been about the black community versus the white community. It’s about decent people, both black and white, against the racists!”

“Proud to be part of the rapidly growing Black Lives Matter movement in Smethwick with lots of people who have never done anything like this before. Today was demonstration number six in Victoria Park. The movement is growing.”