INTERVIEW: Boulet Brothers ‘spill the blood’ on Season 4 of Dragula 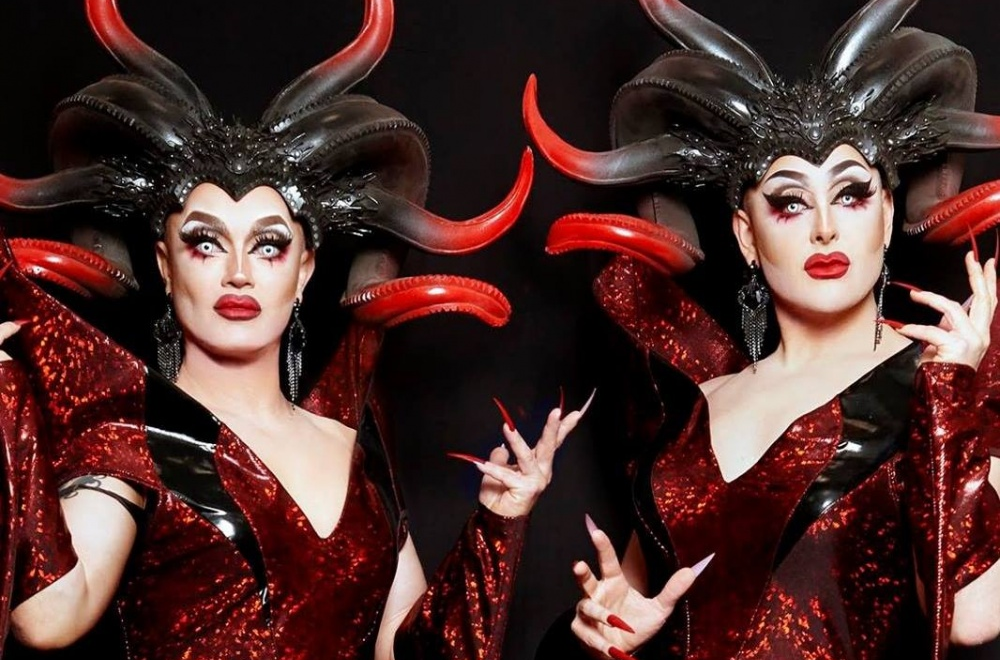 Fans of drag, look no further – the Boulet Brothers are here to spill some tea about the success of their show, with an all important update about Season 4… thank me later.

Dracmorda and Swanthula Boulet are the captivating drag-duo behind The Boulet Brothers’ Dragula, a reality competition show which sees drag performers tick the boxes of filth, horror and glamour, and beat each other out to win a crown and sceptre, $25,000 – and most importantly – to be crowned the world’s next drag “supermonster”.

Drag performers must face-off in testing challenges, followed by a floor show to showcase their (quite literally) sickening looks.

At the end of each episode, however, the Boulets put the worst-performing contestants through an elimination challenge. Now, your mind may be cast to a way in which a fellow drag competition handles the process of eliminations.

For, in Dragula, contestants must trudge through a gruelling “Extermination Challenge”, which aren’t for the faint hearted. We’re talking Fear Factor meets Bushtucker Trials – eating of brains or live spiders, having thick needles pierced through your skin and even skydiving in full drag.

We know what you’re thinking – suddenly a lip sync doesn’t sound too bad!

But this is part of the Boulets’ winning formula. The challenges, including the exterminations, are to present the contestants with the opportunity to confront their fears. Their passion for drag is their armour and is often what spurs the contestants’ confidence.

The last performer standing is the one who has conquered the most challenges the most flawlessly.

I was very fortunate to catch the Boulet Brothers in their hectic schedule for a catch up interview. Experience the dark magnetism below:

Ben: Hi Drac, hi Swan. I’m Ben and it’s so amazing to talk to you! First of all, I want to thank Dragula and yourselves for making my quarantine exciting. I wondered, though, how quarantining has affected you both, and your capacity to work?

BB: Hi Ben, you are so welcome and we’re glad to know we’ve added some thrill to your isolation.

Little Miss Quarantine has done her best to slow us down and make our lives more difficult. She has succeeded to a small degree but we have been forced to diversify and challenge ourselves to be more creative. We’ve actually managed to manifest some really innovative new ways to work and create.

I’m an actual horror geek and did my English Literature dissertation on haunted houses. My two favourite horror films are The Babadook and The Shining. I wondered what horrors sucked you into the genre – and if films didn’t, what did?

Wonderful! Some of our absolute favorite horror films are the original Halloween, Hellraiser, Death Becomes Her and Hereditary. Aside from Dragula we also produce the Annual Los Angeles Halloween Ball, and naturally we both love haunted houses and Halloween in general.

For judges of a reality show, I’ve noticed that integrity prevails in your show. How emotionally invested are you in the eliminations/wins?

We want to see all of our competitors win. Only one monster can win the season of course, but we encourage all of the artists on our show to be the best, baddest and deadliest version of themselves possible. That is winning. We feel connected to them and their struggles as outcasts, misfits and artists.

With equal judging and hosting responsibilities, I wondered how often you disagree on eliminations and wins? And perhaps even give a time where you really had to argue your own cases to each other?

Well, we both have an eye for winners so we rarely disagree about who wins a challenge. There is something special and palpable about seeing a performance live. The winning performance usually has a power of presence that we both spot immediately.

As far as difficult exterminations, Episode 6 of Season 2 was our Gothic Wedding challenge. It was a memorable floorshow. When it came to the deliberation, the 2 of us were completely opposed. We argued, we debated. We brought in back up from other producers. It was a heated struggle.

In the end, we did what we always do, which is do the unexpected! We announced Abhora the winner of the challenge because her performance was wild and chaotic and then we put her up for extermination for the exact same reasons.

Fans are itching for a new season of Dragula! Each season is going from strength to strength. Is there any update on a Season 4? Has lockdown impacted its production at all?

Dragula Season 4 is on the way! Like many productions, the pandemic has made things more difficult, but as I mentioned earlier, we have managed to create new opportunities out of this trying time.

Fans will have to squirm and wait a bit longer for Season 4, but we do have an exciting surprise coming this Halloween.

I’m from the UK and as you know we have a big drag scene here. I wondered how much you enjoyed bringing Dragula and what the reaction is like? Do you intend to return?

We love the UK. The fans are wild and lovely and you can feel their adoration for Dragula like electricity in the air. We have been 3 times now and we look forward to a return.

Who would each of your dream guest judges be for the show?

It’s not exactly like that for us. We aim to pick the best judges we can that directly relate to the challenge that episode.

Dragula is the one to beat in terms of inclusivity. Including two drag kings is unprecedented. Do you plan to continue pushing the boundaries of diversity in future seasons of Dragula?

What with all the BLM protests which have been happening recently, I was wondering what your views were on the specific struggles of QTIPOC? How much more vulnerable are they in society?

Respectfully, I think there are many other people who can speak to this better than we can. However, all you would have to do is pay attention and listen to the voices we are hearing in our news and around the world. Minorities and particularly QTIPOC are extremely vulnerable groups who suffer brutality and injustice on a regular basis.

(Visited 4,678 times, 1 visits today)
https://www.iambirmingham.co.uk/2020/08/19/interview-drag-sensation-boulet-brothers/https://www.iambirmingham.co.uk/wp-content/uploads/2020/08/Boulet-Brothers-Dragular-800x528.pnghttps://www.iambirmingham.co.uk/wp-content/uploads/2020/08/Boulet-Brothers-Dragular-300x198.png2020-08-19T17:31:14+00:00Ben HouseEntertainmentInterviewsLGBT+ShowbizWhat's OnBen House,Boulet,Boulet Brothers,Comedy,Competition,Dracmorda Boulet,Drag,Dragula,Dragula Season 4,Hollow Eve,Horror,I Am Birmingham,Interview,Landon Cider,LGBT,LGBTQ,Millie Shapiro,reality TV,Scary TV,Showbiz,Social Media,Swanthula Boulet,The Boulet Brothers,TV,Twitter,USA,web seriesFans of drag, look no further - the Boulet Brothers are here to spill some tea about the success of their show, with an all important update about Season 4... thank me later. Dracmorda and Swanthula Boulet are the captivating drag-duo behind The Boulet Brothers' Dragula, a reality competition show which...Ben HouseBen House[email protected]AuthorFreelance PR practitioner, journalist and copywriter Ben has been involved in many different projects, whether in showbiz or philanthropy, and is able to turn them out into engaging copy for social media and press releases. He has remarkable communication skills and media relations, with many notable figures in the LGBTQ+ community having been exclusively interviewed by him. With a Bachelor's in English and a Master's in Public Relations, he is looking to flex his PR acumen further for arts and events in the West Midlands.I Am Birmingham
« What is Birchfield Big Local?
Birmingham City Council responds after city placed on national coronavirus “watch list” »