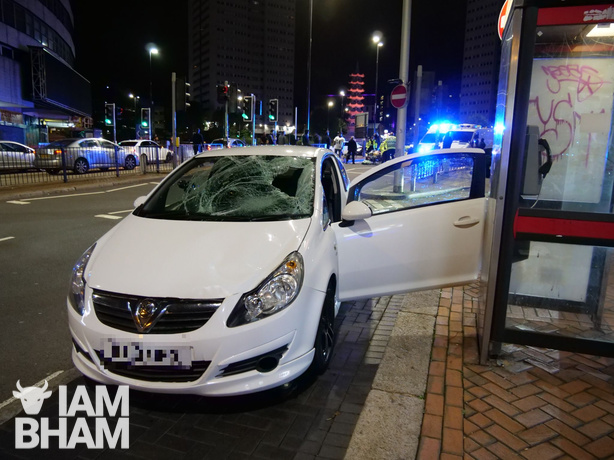 A young man was taken into police custody in Birmingham city centre early this morning, after a vehicle he was believed to have been driving was involved in a “serious collision” which has left at least two people injured.

The incident took place in Smallbrook Queensway next to the Holloway Circus roundabout at approximately 3.00am on Thursday (September 24).

Emergency services rushed to the scene, as two victims lay in the street outside Radisson Blu hotel, just 500 yards from Birmingham New Street Station and the Bullring shopping centre.

Police officers arrived on scene at around 3.20am with ambulances following soon after, at around 3.35am.

A white Vauxhall Corsa with a smashed windshield was parked a few yards from where the collision took place. Witnesses claimed the shattered window was where the vehicle impacted one of the victims.

According to our I Am Birmingham reporter, who were at the scene, there was several people trying to help the victims while there was also a commotion as emotionally charged members of the public confronted the driver of the vehicle involved in the crash.

West Midlands Police officers broke up the confrontation before apprehending a man – believed to be in his 20s and dressed in a black sweater and light blue jeans – and taking him into custody. As the man was escorted into a police van, he was reportedly overheard telling the officers, “I’m not drunk yeah, I not drunk!”

The two victims, one male and one female, are reportedly partners who were visiting a nearby nightclub, according to a close friend who was out with them.

Paramedics attended to the victims lying on the ground. The male victim, who was unconscious beside a small pool of blood, was placed in an ambulance first and taken to hospital.

The female victim, who reportedly suffered a broken ankle, was provided support from friends before also being taken to hospital by paramedics.

There were eight emergency vehicles on the scene including several police cars, a police van and two ambulances.

A man who who only wanted to be referred to as “Mark” told I Am Birmingham he and another female friend were with both victims at a nearby nightclub just before the incident, describing them as “close friends”.

He said they left the venue with the aim of meeting up shortly after, outside the female victim’s apartment to head back out. However, he was shocked when he called her phone for an update, only to be told by a member of the public that there had been a tragic crash.

Both he and his companion then rushed to the scene of the incident to aid their injured friends, as emergency services were called.

“So basically we were together in a club, we left then went in front of the apartment where they live up the road in Crowne Plaza, as we parked there waiting for them.

“They live one minute away from the club. We called their number to find out where were they, a random guy picked up the phone to say they got hit by a car.

“So we drove quickly yeah, to the scene, and we later on find out that the driver of the car was still standing by. He was scared to obviously expose himself, and then ambulance and police came.

According to Mark, the two victims are in a relationship and all four friends were enjoying a night out.

As medical professionals responded to the incident, Mark stayed with the victims while also consoling his friend, who was crying and appeared to be in shock.

“We’re fine, we’re together. We were four of us together in the club. We just left to wait for them from the apartment, just the two of them that’s injured. We’re fine. Perfectly fine.”

Mark said he knew the male victim “quite well”, adding “I’m worried about the guy, the girl she had a broken ankle.”

He did not wish to disclose the names of the victims.

Police cleared a traffic congestion outside the Radisson Blu hotel in order to assist the victims, as revellers and visitors tried to get their cars out.

Upon hearing what had happened, a female driver and her passenger wound up their windows, expressing fears for their safety.

Several people on the scene said they “heard a loud bang” followed by screams and commotion.

A local resident, was woken by the loud noise, told us they had heard screams and arguing on the street outside for nearly an hour at the time of the incident.

“There was a lot of noise all night. At first, I just thought it was a really busy club night before the increased lockdown restrictions but I’d never heard such a commotion. I got up to check when I heard what sounded like a crash and then harrowing screams.”

The resident initially feared there had been a knife attack, in light of the Birmingham stabbings in the same vicinity earlier this month.

“I saw people running all over the place and groups of people left and right. I then got sight of people running to help a man and woman lying on the street outside the hotel. I was mortified. I wasn’t sure if it was another stabbing attack.

“It was all incredibly shocking and disturbing given what happened here a few weeks ago when that young man was murdered behind our building just here.”

During tonight’s incident, scuffles were also seen outside Nakira Nightclub & Lounge in nearby Suffolk Street Queensway, a 3-minute walk from the scene of the incident. There appeared to be a loud argument as at least 40 people surrounded a car in the venue’s car park. It is not known if this is connected to the incident.

Roads around site including parts of Smallbrook Queensway, Suffolk Street Queensway and Bristol Road have been closed with traffic being diverted as police detectives investigate today’s events.

This is a developing story which will be updated as more details are known.