INTERVIEW: Dimple Kapadia on how she landed her role in Christopher Nolan’s TENET 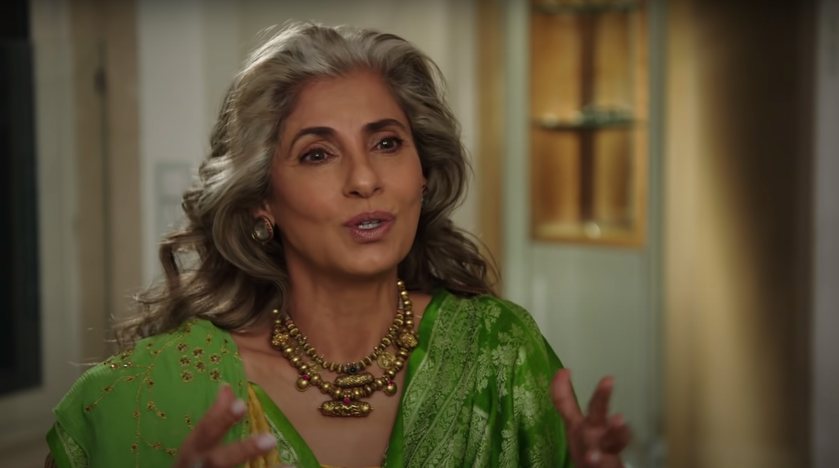 While it’s very rare for fresh feature films to be hitting major cinema screens across the globe during the coronavirus pandemic and with the ever-changing lockdown rules adversely affecting all aspects of the wider economy, let along the entertainment industry, British-American film director Christopher Nolan has taken quite a gamble with the international release of his latest blockbuster TENET.

Yet, as the public trepidly venture out to enjoy some leisurely time at local multiplexes churning out cheap and cheerful classics like Jurassic Park, Harry Potter and even several flicks from Nolan’s back catalogue; the $200 million movie TENET bucks the trend of resigning itself to online streaming platforms in a bid to exploit a largely quarantined audience, and instead is being deliberately shown across major cinema screens, for which most of Nolan’s films are evidently made.

At 63, the multi-award winning thespian – whose career has spanned five decades after debuting at only age 14 – has admitted that even she was overwhelmed at being offered the chance to appear in a Nolan masterpiece, auditioned and selected by the director himself. Nevertheless, she braced herself and had one heck of a ride.

The mother to two and grandmother to four often takes a lot in her stride, and so she should as a veteran of classic Bollywood cinema who is practically Indian royalty, yet her experience of working on TENET left her not only in awe of the film’s scale but with a deeper connection and appreciation for the man helming the project, 50-year-old Christopher Nolan.

Sheikh Shahnawaz caught up with Dimple Kapadia for I Am Birmingham to find out more about her journey into a Nolan masterpiece, her shock at nabbing the role, how she remembered her difficult lines and what she thinks of the final film.

Sheikh: Hi Dimple, how are you?

So, what’s it like being in one of the biggest blockbusters ever?

I’m high up in the mountains darling, flying high, high and higher. It’s incredible, it’s unbelievable and I’ve seen the film, it’s just fantabulous, I’ve seen it once, I need to see it two times more because I see his [Christopher Nolan] films at least 4 times before they sink into my head, but it’s been a great experience and a great journey.

I’ve seen it four times myself, including in IMAX 70mm film, Nolan’s intended viewing format for TENET. Have you had a chance to see it in IMAX?

Wow! No, no, no, no, they don’t have many IMAX cinemas in India. I saw it in the trial and I’ve seen it once but I still need to see it again. It’s still going over my head, having worked on it, seen it, because he [Nolan] does such a fantabulous job of hiding his little gems all over the place that you need to, sort of, revisit them and sort of understand them to appreciate it more.

I loved your line in the film where you say “Having a masculine front in a man’s world has its uses”, for me that defines your character Priya so much…

I really… that is my favourite line, I really love that line.

What was the process of you being cast in the film, did you audition, did he [Nolan] meet with you, how did it all go down?

Well, I was called into for an audition and he was coming to India looking for locations. So I went there and took my nephew there thinking that I’m not going to get this part, obviously not, so let’s just enjoy it and let my nephew get a picture with a star.

So I took my nephew along, got him a picture there and I took the audition and because I didn’t think I’d get it… and the best part is that I didn’t even realise that I was standing in front of one of the world’s greatest directors. He was so down to earth, so humble, made me feel so comfortable, my God, it was tremendous, tremendous.

I can’t imagine anyone else playing Priya but you now, it seems like a role that was only made for you since I’ve watched the film four times. I can’t imagine any other Indian actress playing the part other that yourself.

But that again is the director’s eye, he’s the one who sees what he wants, it’s entirely to his credit that he decided to go with me. Not that I’ve done that much of work but I’m really happy, yeah.

No, I’m very very honoured. I don’t go around… sort of pretending to be humble. I know my capacity and this was beyond my capacity and capability, it just happened. He made it happen. He said ‘I’ve made you a superstar’, I said ‘No, you’ve dragged me out of my brain, literally!’

What was it like when you first got the script because I know Christopher Nolan’s very secretive with his scripts. Did he lock you in a hotel room and once you’d done with the script, ask you for it back?

I was locked up in a make-up van and it took me about 4 hours to read it. The first 50 pages I didn’t know what the hell was happening, not that I got to know very much in the rest of it but I read a lot, yet I could not understand what was happening.

Then I saw my dialogue and they were like, so long, so long that I had a heart attack, and I can’t remember lines. So what I did was a cheeky thing and I took my phone and I clicked just my dialogue, you know, and when Andy Thomson [Associate Producer] came I gave him the script and I said ‘Listen, I’ve taken shots of my dialogue’ and he said ‘You can’t do that’. So I said ‘You have to give it to me because I did not remember anything’.

I said ‘I’m being honest with you and telling you that I need this, without this I can’t deliver really, really long, long lines’ and thank God I had that with me and I could work because the whole shoot is in, like, a single shot. He got the whole scene in a single shot so it was literally a speech.

Well, you know what, I think he already has a vision of what he wants, right? And because I had already done my audition, he wanted me to be exactly like that and nothing else.

He saw the part in me and, on my hand, I did all my preparations and yes, there was a… I finished a scene, I went back on my flight and I suddenly realised ‘Oh my God, this is what the last two lines meant!’ (laughs)

On the next set, I went back to him and I said “I’m sorry but on the flight I realised this is what the last two lines meant, can I redo those two lines?’ And he said ‘No, you convinced me, it’s as simple as that!’

It’s been such a pleasure talking to you Dimple and finding out more about your involvement in the film. I think I’m going to have to go and watch it fives more times myself…

Yeah, me too, me too. I’ve already requested them to show it to me at least twice more, because I have to see it! It’s a brilliant result camouflaged in his movies and you have to see it again and again to really get the whole thing out of it, get all the juice out of it, and that’s what’s so special about it.

And the other thing I want to say is that guys, please don’t go in for the pirated versions because it does no justice, this film has to be seen on the big screen. It is a big screen film, that’s how you have to see it! The action is out of this world, it’s amazing, it’s amazing what he’s done! It’s crazy what he’s done!

I agree, it’s a film where you have to let the visuals take you over.

The other thing I saw and I felt was that his passion and dedication towards his storytelling and his vision was so infection that the entire unit is consumed.

It’s like an army on one trip just to realise his vision, that’s the whole trip and it’s a beautiful trip, absolutely. I’ve never worked with anybody with this kind of passion, and dedication and hard work, I haven’t. I can’t even begin to imagine, yeah. Fantastic!

It’s such a thought-provoking film and an experience film that’s never been crafted for the cinema screen before and that’s what Nolan’s strength is. For me, TENET has brought the same excitement as Inception and Interstellar…

Yeah, the first film of his that I’d seen is The Prestige, it is my all-time favourite. My God, I’ve seen it four times and it literally took me the fourth time to really understand, what a film, my God!

Thank you so much for speaking with me Dimple, it’s been a pleasure!