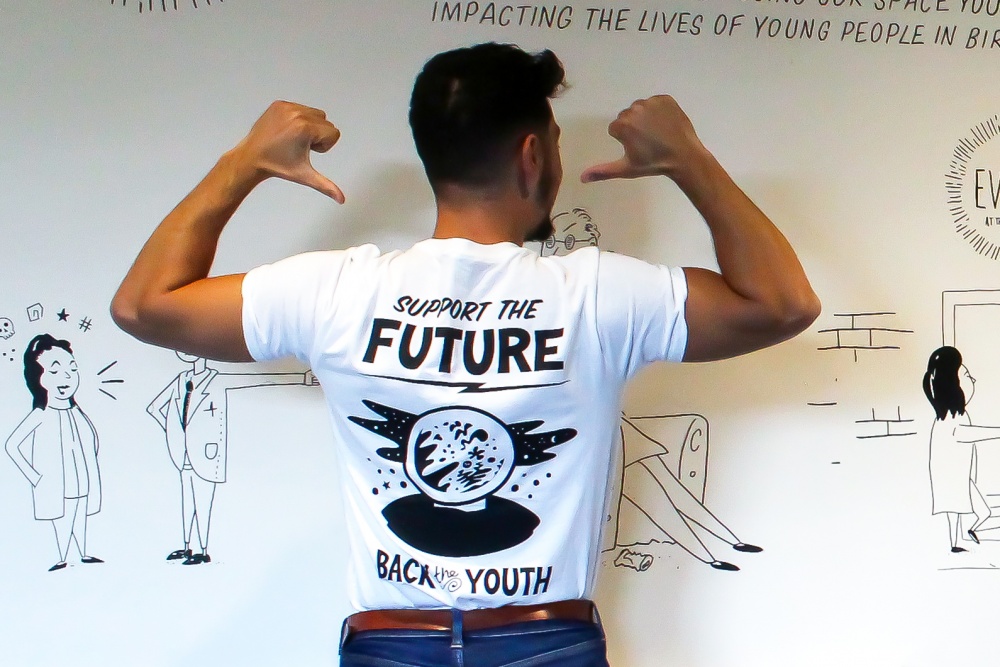 A Midlands-based social enterprise cafe has teamed up with satire artist Foka Wolf to call on Birmingham corporations to support its young people.

The region’s infamous satirical visual artist has joined forces with Evolve – a cafe run by Midlands-based charity Aquarius – to launch limited edition t-shirts, with proceeds from sales going towards funding the cafe’s work-placement schemes for 16 to 25 year-olds.

According to current data, Generation Z youth have been hit hardest by employment cuts caused by the ongoing coronavirus pandemic. The  figures have prompted city street artist Foka Wolf to put pressure on city business authorities to fund greater opportunities for young people.

The secretive street artist, who is often described as “Birmingham’s Banksy” has designed a t-shirt with the slogan ‘Support the Future – Back the Youth’ emblazoned across it.

Having heard of Evolve’s role in creating job opportunities, training schemes, and fully-funded work-placements for young people facing barriers to employment, Foka Wolf was inspired to use his talent and his platform to raise the profile of the work being done for the youth during the current climate which has proved challenging.

The controversial artist, whose satirical work is often laced with thorny political themes, spoke about what compelled him to join forces with the social enterprise service being offered by Evolve.

“So often, businesses take the path of inaction because it’s easier to say ‘it’s not possible’ or ‘I don’t know how’ than to create the job roles that are so desperately needed.

“I’ve been following the work of Evolve for a while and, for me, it just goes to show that the changes are in fact more than possible: they’re impactful, effective, and in many cases life-saving.

“I wanted to collaborate with Evolve to put the spotlight on what the team has achieved and show that if an independent social enterprise cafe in Birmingham can do it and thrive, then the multi-national companies have no excuse anymore.”

Evolve, which is described as a ‘coffee-shop with conscience’, is no stranger to serving up positive change for the youth.

Established in 2017 to provide young people facing barriers to employment with training, qualifications and job opportunities, the charity venture has since worked with more than 30 young people at their Digbeth and Selly Park locations.

During their placements, Evolve has offered its employees over 1,000 hours of one-to-one support, and with its pioneering approach it has seen 70% of them go on to be employed full-time or enter further education.

The collaborative t-shirts with Foka Wolf are the latest initiative the enterprise has under its belt. Not only has it reopened as a dedicated wellbeing cafe in the post-lockdown ‘new normal’; it has also partnered with CHK Foundation to deliver a new service called ‘Nurture @ Evolve’, adapting its tried-and-tested methods to support businesses in creating placement schemes for young people who have a history of substance/alcohol misuse.

“We are so excited to be working with Foka Wolf on this latest campaign, as it is a matter that is so close to our hearts. The young people that make up the team at Evolve are more than just employees, they are truly the beating heart of all that we do.

“We are so passionate about finding ways to show businesses from all sectors how to make the most of the vast talent that is on their doorstep, through partnerships like ‘Nurture @ Evolve’ and we hope that by working with Foka Wolf, we can help amplify this message to the masses.

“We are so fiercely proud of Birmingham, as our status as the youngest city, and all the positive changes that are starting to happen for young people; however, we also see first-hand just how desperately things need to move and how much more still needs to be done to help.

“Young people have faced barriers to employment long before the pandemic hit, but COVID-19 has exacerbated matters to a critical point. If Birmingham’s businesses don’t follow our lead soon, the knock-on effect for the future could be catastrophic.”

The t-shirts are priced at £25 and can be bought from Foka Wolf’s online shop here.