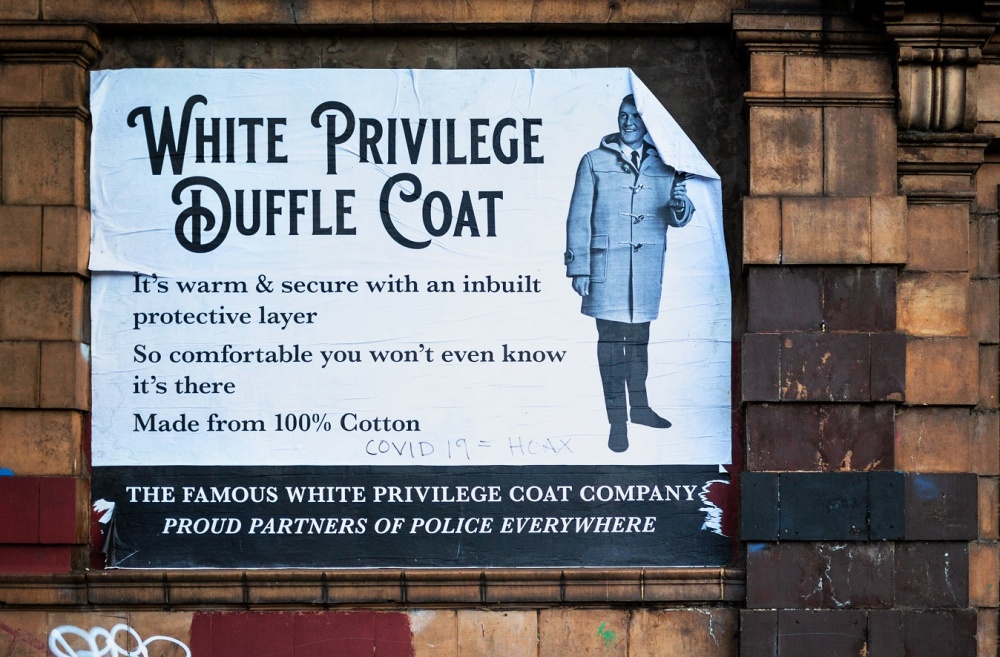 A daring new poster which employs acidic satire to attack and highlight the concept of ‘white privilege’ has been displayed in Digbeth, Birmingham.

The parody poster is the work of an enigmatic Birmingham street artist and activist known as Foka Wolf, an anonymous urban creative who is often compared to Banksy in his scathing but hilarious socio-political observations.

The description for the coat includes an “inbuilt protective layer” which references how ‘white privilege’ is always protected and guarded from attacks. This “protective layer” is so secure that those who wear it “won’t even know it’s there”.

The term ‘white privilege’ – which some find objectionable – refers to the idea that white people have the luxury of fundamental human rights and protection from discrimination, because of their skin colour. The phrase does not suggest all white people are rich, have easy access to resources or have an easy life; rather that they benefit by default from a society’s structural and institutional racial inequality more than a person of colour or ‘BAME’ person.

There has been a recent surge in Birmingham artists producing politically and socially charged street art which express solidarity with the ‘Black Lives Matter’ protests following the worldwide protests which ensued after African-American George Floyd was killed by a white policeman in the US. The most recent wave of global protests were triggered by the murder but have reignited a much broader concerns about structural racism including decolonising education, inequality in the workplace and police brutality.

Speaking about his most recent creation, artist Foka Wolf said: “I thought this didn’t apply to me because I’m working class. Wrong. I have been sticking these posters up for years. Usually in broad daylight and have never had any trouble off anyone.

“Do you think a black man could do the same?”

The parody advert proclaims the coat is made from “100% Cotton”, making a direct link to the Slave Trade and the cotton fields of the American South where black slaves toiled daily under terrible conditions picking cotton – the wealth of which still benefits western society and white people to this day, according to academics.

At the bottom of the poster is an endorsement for the police who are portrayed as “proud partners” of the “white privilege coat company”.

Foka Wolf uses the format of a mock advert to throw a light on allegations of institutionalised racism within the police force.

Controversially, the choice of a “duffle coat” in the satirical piece makes a couple of searing allusions that hearken to colonialism and the military.

The fabric for the original duffle coats came from Belgium, a country that has a very controversial colonial past.

Leopold II was King of Belgium between 1835 and 1909, and under his absolute reign in the Congo around 10million Africans died in horrendous conditions as the country was exploited for ivory and rubber according to historians.

Atrocities such as murder, rape, and torture were commonplace during the reign of the notorious Belgium king whose statues can still be seen today across several European states.

The “duffle coat” was also very popular with European armies, including the British Navy, which traveled far and wide to protect the colonies and keep ‘people of colour’ subjugated.

Foka Wolf employs subtlety and satire in the ‘white privilege’ poster to highlight the past and present and throw a spotlight on contemporary events unfolding both here and around the world following the brutal death of George Floyd.