Dudley shopper fined by police for not wearing mask, despite claiming health exemption 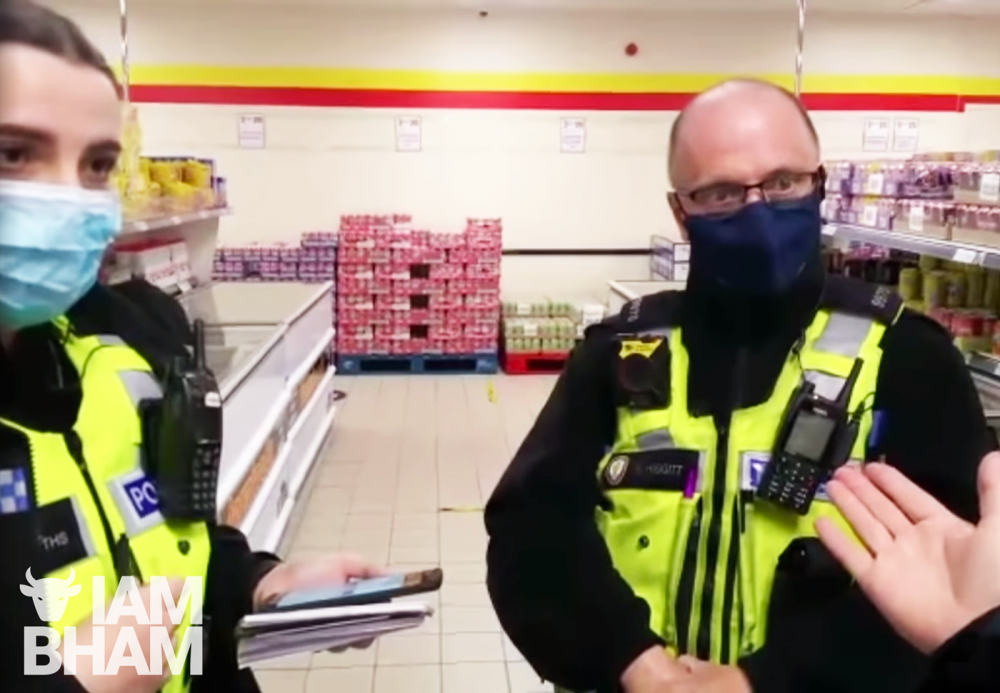 A supermarket customer in Dudley has been fined by police for not wearing a face mask despite her claiming she is exempt on health grounds.

Captured in footage circulating on social media, the woman is shown being handed a fixed penalty notice for failing to put on a face covering at a branch of Farmfoods in Dudley amid the current coronavirus pandemic and national lockdown.

In the video – published online on November 25 and already shared hundreds of times – the customer is seen attempting to show what appears to be a medical card during a heated confrontation with two officers who remain adamant she has “broken the guidelines”.

WATCH | Woman fined for not wearing mask in Dudley supermarket:

While the woman and her friend argue she hasn’t broken the law, the officers suggest her card is “not valid” as it was downloaded from the internet, insisting she needs to go to court to present her “burden of proof”.

However, the official Government website encourages members of the public to download or print a provided exemption badge if they need to show or display evidence of their exception. It also clearly states that providing this proof is “a personal choice and is not necessary in law”.

Yet, the male officer in the video is shown describing both the woman they’ve stopped, as well as the man filming her, as a “disruptive couple not wearing masks” as he speaks to a colleague on his police radio.

The same officer also tells the woman that “If you haven’t got a certificate or a doctor’s note, the onus is on yourself.”

Before the heated discussion ensues between the shoppers and police officers, the woman is heard being told to put her shopping back, presumably by a member of staff at the store.

Towards the end of the footage, the woman defending her right to be exempt says: “I’ve done everything I can, really. At least I’ve done something to try.”

Posted on Facebook, the video was shared alongside the caption: “So, this is how they are going to play it now!!

“Using fear to issue fines to non-mask wearers and then saying it’s down to you to dispute it & show an exemption if you have one!

“Remember people, you don’t have to show any exemption OR give any of your details. You have not broken a law.”

Although not law, it is deemed mandatory to wear a mask in shops, but exemptions apply for those with certain physical and mental health conditions.

Responding to the incident, West Midlands Police yesterday tweeted: “We are aware of a video circulating online from a supermarket in Dudley. It’s currently being reviewed and we will issue an update as soon as we can.”

In an additional statement, they added: “We’ve reviewed video footage showing two of our officers speaking to a woman who wasn’t wearing a mask in a shop in Dudley – a borough with one of the highest COVID-19 infection rates in the region.

We have released the following statement in relation to a video showing officers in #Dudley challenging a woman not wearing a facemask. ⬇️⬇️ pic.twitter.com/iQK5m0TDws

“Both officers were polite and professional throughout the conversation. They did not ask the woman to provide any proof she had a ‘reasonable excuse’ not to wear a face mask in the shop.

“The shopper voluntarily produced a document. This was a generic document printed off the internet and not personal to her circumstances.

“Officers are walking a difficult line. We would rather we didn’t have to police COVID-19 legislation but it is important we do to limit the spread of the virus and save lives.

“Officers have been asked both regionally and nationally to enforce against people they suspect are flouting COVID-19 laws. In this case, the officers clearly informed the woman of her option and how she was able to contest the fixed penalty notice.

“We are committed to keeping our communities safe from the virus.”

Online, people have tweeted and shared their views on the video with many empathising with both parties, but urging for clearer guidelines for police to prevent misunderstandings.

One Facebook user wrote: “You do not have to show any NHS or doctors written exemption to be exempt from wearing a mask either in this situation give your details and take the fine it won’t stand up in court.”

While another commented, “Just shows you nobody knows the law, especially the police. Firstly they have no jurisdiction, private property and in public common law supersede their jurisdiction. They are a service and you, don’t require their services and have rights not to be harassed.”

Another individual who could personally relate to the incident shared: “I’m being told to wear one at work, docs won’t give certificate, told me to print something off the NHS website!”

And another wrote: “This is effectively discrimination. Maybe they missed a briefing. Pretty sure they could be looked into independently for this.”

Earlier this month, West Midlands Police apologised for causing any “distress and upset” to a man and his wife after the man was asked to leave a Sainsbury’s store in Oldbury for not wearing a face mask, after explaining he was exempt.

The force accepted the action was “wrong” and said: “We stated that it was a legal requirement for an exemption card or badge to be shown. This was incorrect and the officers have misinterpreted the guidance.”

Footage also emerged of an incident in a Black Country supermarket which ended with a woman hurling down her shopping basket after being told she could be arrested.

The infection rate in Dudley currently stands at 568.7 cases per 100,000 people and the borough has recorded 1,829 in the last seven days, according to latest figures from Public Health England.

As the national lockdown comes to an end on December 2, Dudley and Birmingham will continue to be placed under high alert restrictions, enforced under the Government’s Tier 3 safety rules.

(Visited 4,039 times, 1 visits today)
https://www.iambirmingham.co.uk/2020/11/28/dudley-shopper-fined-police-not-wearing-mask-despite-claiming-health-exemption/https://www.iambirmingham.co.uk/wp-content/uploads/2020/11/Dudley-Farmfoods-supermarket-face-mask-dispute-with-West-Midlands-Police-video-still-by-Joanne-Sears-01-800x554.pnghttps://www.iambirmingham.co.uk/wp-content/uploads/2020/11/Dudley-Farmfoods-supermarket-face-mask-dispute-with-West-Midlands-Police-video-still-by-Joanne-Sears-01-300x208.png2020-11-28T11:44:15+00:00Staff ReporterCoronavirusCrimeHealthNewsRetailVideoscoronavirus,Dudley,England,exemptions,face mask,face mask fine,face mask penalty,Farmfoods,fine,fined,footage,Government,Great Britain,Health,I Am Birmingham,law,law enforcement,mask,mask exemption,news,on camera,penalty,Police,police fine,regulations,Rules,shopper,supermarket,UK,United Kingdom,wear a face mask,West Midlands,West Midlands Police,WMPA supermarket customer in Dudley has been fined by police for not wearing a face mask despite her claiming she is exempt on health grounds. Captured in footage circulating on social media, the woman is shown being handed a fixed penalty notice for failing to put on a face covering at...Staff ReporterStaff Reporter[email protected]AdministratorI Am Birmingham
« Two teenagers found guilty of murder in Coventry drive-by shooting
Over 100 lockdown violation fines issued as illegal rave broken up in Digbeth »