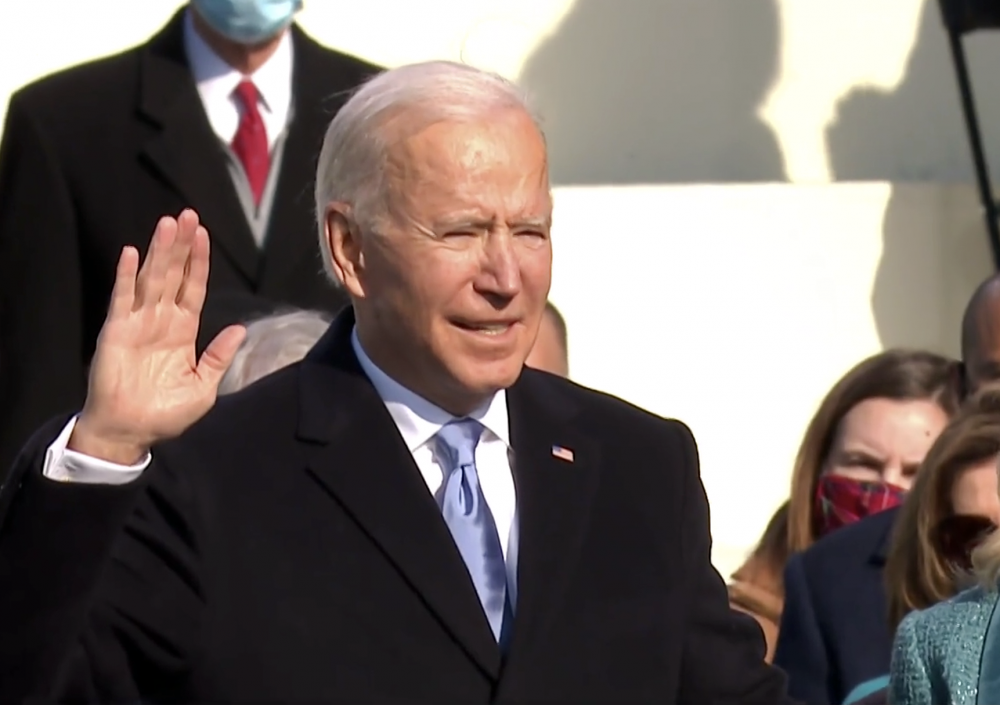 Joe Biden has officially been sworn in as the 46th US president at the US Capitol in Washington and Kamala Harris as Vice-president.

Upon taking her oath, Harris became the first woman to hold that position, as well as the first person of African-American heritage and South-Asian heritage.

In his first speech as president, Biden said “This is democracy’s day” and said the US “has much to do in this winter of peril, much to repair.”

“A day of history and hope, of renewal and resolve. Through a crucible for the ages, America has been tested a new and America has risen to the challenge.

“We’ve learned again that democracy is precious, democracy is fragile and, at this hour my friends, democracy has prevailed. So now on this hallowed ground where just a few days ago violence sought to shake the Capitol’s very foundations, we come together as one nation under God – indivisible – to carry out the peaceful transfer of power as we have for more than two centuries.”

The new president said the country must confront the rise of white supremacy, and reject manufactured facts, adding “I will be a president for all Americans. I will fight as hard for those who did not support me as for those who did.”

“What are the common objects that we as Americans love? Opportunity, security, liberty, dignity, respect, honour, and yes, the truth,” he said to applause.

“I’ve just taken a sacred oath each of those patriots have taken. The oath first sworn by George Washington.

“But the American story depends not on any one of us, not on some of us, but on all of us. On we the people who seek a more perfect union. This is a great nation, we are good people.

“And over the centuries through storm and strife in peace and in war we’ve come so far. But we still have far to go.”

Lady Gaga sang the US national anthem ahead of the ceremonies, and Jennifer Lopez performed with the US Marines Band jsut before Biden was sworn in.

Singing a medley of This Land is Your Land and America the Beautiful, Lopez spoke in Spanish in between her performance, announcing, “Una nación indivisible con libertad y justicia para todos” which translates “One nation under God, indivisible with liberty and justice for all.”

Gorman, the country’s first national youth poet laureate in 2017, eloquently recited, “We’ve seen a force that would shatter our nation rather than share it, would destroy our country if it meant delaying democracy, and this effort very nearly succeeded. But while democracy can be periodically delayed, it can never be permanently defeated.”

Rev Silvester Beaman, a close friend of Biden for over 28 years, delivered the benediction.

Guests include former president Barack Obama and Michelle Obama, George W. Bush and Laura Bush, and Bill and Hillary Clinton. Representatives of Congress made up part of the audience, standing and seated in front of The Capitol building, all socially distanced and wearing face masks.

Donald Trump, who left the White House earlier today aboard the Marine One helicopter, did not attending his successor’s inauguration – only the fourth president not to do so – but his deputy Mike Pence was present.

Some 25,000 troops were guarding the ceremony after a deadly riot at the Capitol earlier this month.