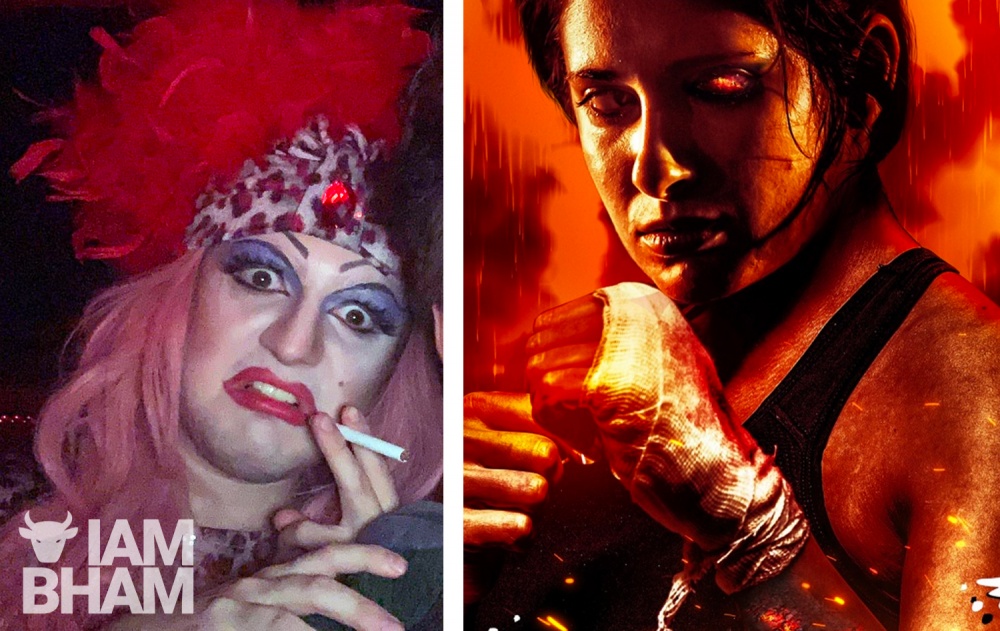 The 27-year-old West Midlands performer adds the latest string to his bow after already appearing in movies about vampires and witches.

Hellkat, a story of a fallen mixed martial arts (MMA) fighter who must win a netherworld no-holds-barred death tournament against man, beast and demon to save her soul, premieres online in February.

McDonald, who plays the role of Jan Divine, the ringside screaming demonic drag queen wife of hellish overlord Jimmy, chats to I Am Birmingham about his experience:

Tell us about your recent work on Hellkat, how did you get involved in the film?

I was actually on a birthday tour of the Tower of London for one of my very good friends and co-star from my previous film Witches of Amityville Academy, Donna Spangler, when I received a WhatsApp message from the producer of ‘Witches’ telling me about his new film, and how he thought that this would be such an immense and crazy role for me and how different it would be from previous roles that I’ve played.

It was only later on on the train ride back from London that I got to fully read through the script of the film and see how truly crazy the role of Jan Divine truly was.

What is the film all about, what themes are explored (no spoilers, of course)?

I can’t tell you too much but Hellkat is the story of a fallen MMA fighter who must fistfight her way out of eternal damnation and save her soul.

The whole film is one big redemption arc for our protagonist Katrina, played by the wonderful Sarah T. Cohen, and you get to see her scrape tooth and claw up from rock bottom as she fights for her soul.

What was it like working with the co-directing duo of Scott Jeffrey and Rebecca Matthews, who helm the production?

I previously worked with these two on the Proportion Productions feature Witches of Amityville Academy and this time round on Hellkat I was given a lot of creative freedom to take the role of Jan Divine where I think she would go.

Have you ever done drag before on stage or screen or was this a completely new venture for you? Tell us about how you got into the role?

I’ve never actually done drag before so this was a whole new avenue of madness for me!

With a name like Jan Divine she is obviously referencing two primary figures, Jan Crouch a southern belle televangelist with large pink hair, and legendary drag queen Divine. There’s the main inspiration I could take from these two which can be seen in the garms and wig provided by our wonderful head of wardrobe Artist Hana and also in the style of make up provided by our wonderful MUAs Julia S. Merino and Rebecca Wheeler.

But because drag is such a diverse art form with kings, queens and non-binary royalty from across the spectrum that play with the concept of gender expression as an art form in so many different ways there was a wealth of inspiration I could draw on, from the many seasons of the very popular show RuPaul’s Drag Race and various web spin offs like UNHhhh.

But also  to the more independent drag shows that I’ve been to over the years that have flourished along Birmingham’s Hurst Street with performers like Peaches Munroe, Yshee Black, Ashley Marc and so many more, and even now there’s crossover between those areas with one of Birmingham’s own Ginny Lemon now on season 2 of RuPaul’s Drag Race UK.

Is there anything unexpected you found in the role of Jan Divine?

The costumes are expensive, and the skill and time it takes to paint your face, sculpt your hair and sew and create your own garms is incredible!

We only had one look shown for Jan Divine in the film and we had a very small crew that had to cover many other characters and other production areas in the film on a very short schedule.

I can only begin to imagine how expensive and time-consuming it must be for full time drag artists. So viewers, tip your performers! Like in many art forms so much more goes on than what you see in the final show!

You’ve been an actor in several TV shows and feature films to date, what have been your highlights?

I have to admit the role of Jan Divine is pretty high up on the list of highlights. It’s not often you’re presented with a character that has so much room for a crazy performance.

Each of the previous films I’ve worked on always has its grinds and slogs to get through in production but each one always has a silver lining in terms of the people you connect with on set.

On ‘Witches‘ I’ve made some lifelong friends in Donna Spangler, Brittan Taylor, Kira Reed Lorsch and Maggie O’Brien that have invited me halfway across the world to spend time with them in the sunny  Los Angeles boulevards.

Each new person you end up befriending on jobs like these always has their own artistic passions they want to pursue and future projects that they’re planning. I love hearing them talk about what really motivates them to get up in the morning and create art.

You’re also a filmmaker yourself. Tell us more…

Sometimes in this industry you have to create the opportunities for yourself as opposed to waiting for them to come to you, so over the years I’ve worked on various other skills I can ply on films.

Alongside playing the binbag-banshee drag queen Jan Divine on Hellkat, I also was part of the production team that helped to cover running, wardrobe assisting and special FX make-up artists assisting where it was possible.

It’s skills like these that I can then take to productions like Last Man Down, where I ended up covering various art dept. bases for Exilian Studios, helping with prop making and working in synergy with special effects artists, helping with full set construction at times!

Whilst I specialise in acting, sometimes good roles can few and far between so having extra strings to your bow in terms of all round film making is certainly a boon. It also gives you a greater perspective as an actor to the hard work that goes into the props you hold, the costumes you wear and sets you walk on and the technical limitations and problems that can arise in film making.

How has the COVID-19 pandemic affected your filmmaking projects?

I was in L.A. when the pandemic really started to affect America, bars and restaurants started to close and many of the film making friends I had met in the previous few days were beginning to get very worried about the prospects of attempting to continue working with such an unknown virus making the rounds.

Flights from LAX were being cancelled rapidly and I had to cut short my trip just to make sure I could get home and safe. Since that first lockdown acting roles in film and tv had been somewhat light on the ground what with many of the productions companies had in place having to be cancelled or postponed with very little notice.

It was only late July in which I was contacted about Art Dept. roles for “Last Man Down” which was due to be shooting in Sweden. The concept of travelling abroad for work during a pandemic was frightening but COVID-19 safe practices were being introduced and at a time where virtually no help was being given by the government to self employed individuals, you have to take paid jobs where you can get them.

Even now when looking at the productions that are happening, COVID safe regulations slow down the filming process greatly and in an industry where time is money, costs begin to skyrocket, but I’d rather work in a safer environment slowly than wildly rush ahead and be accountable for even more viral transmission.

What do you got have planned for the near future?

Until lockdowns are lifted and death and infection rates drop, it can be somewhat difficult to ask fellow film makers to add extra risks to their life in a production setting, as COVID safe and secure as it might be.

That being said, various elements of pre-production can be done in lockdown such as script writing and online location scouting. I’m currently working with another local actor Sharni Tapako-Brown and with a few different script writers to come up with ideas and designs for films that can be made safely once the pandemic pressure eases.

Where can people find you online?

I spend far too much of my time scrolling through Instagram so it’s best to follow me there @harveymcd93 . I also have a twitter too @HMcD93.

Hellkat premieres online and is available to watch on various video-on-demand platforms from 2 February 2021.