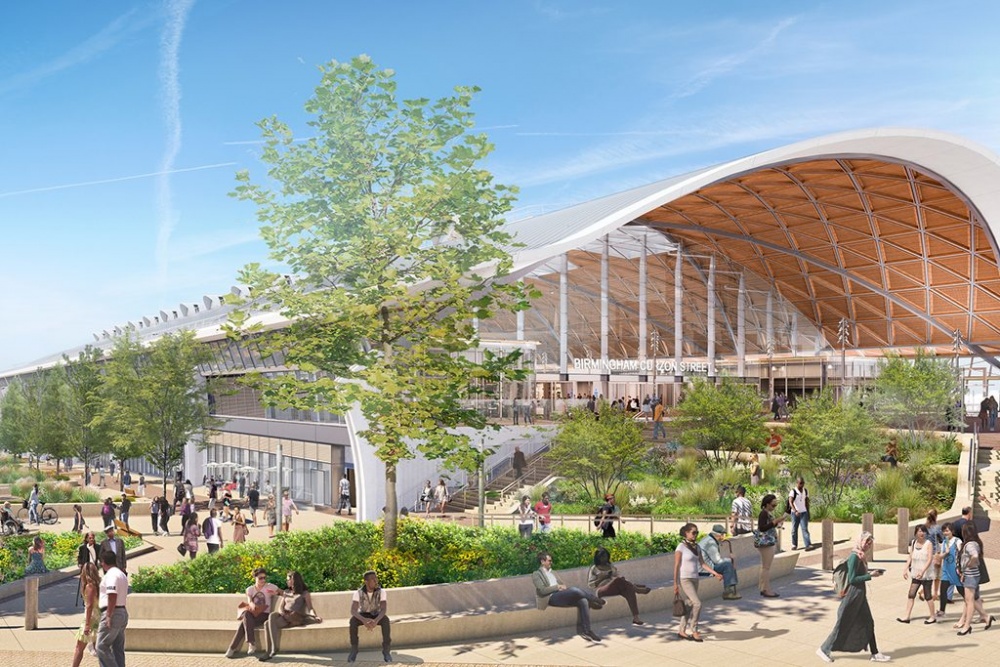 The £570m deal will see the Mace Dragados joint venture work with HS2 in two phases to finalise the detailed design and then build the Birmingham Curzon Street station.

The team beat a shortlist of rival joint venture bids which included a partnership between Bam Nuttall, Ferrovial Construction and Laing O’Rourke Construction.

Located in Birmingham city centre and at the centre of the HS2 network, Curzon Street is one of the most high-profile of all the stations on the first phase.

Part of plans to completely overhaul rundown Digbeth, the new build includes the reopening of the old Curzon Street Station, a grade I-listed building which closed to passengers in the 1890s.

Formerly known simply as ‘Birmingham Station’, the revamped landmark will welcome commuters as the entrance to the new station.

For Mace Dragados, this will be their second major station contract following their £1.3bn contract to build HS2’s Euston terminus in London.

HS2 Ltd chief executive Mark Thurston said: “Birmingham Curzon Street is right at the heart of the HS2 project, providing a fantastic terminus for trains running right into the heart of the city centre.

“The station will play a vital role in the long-term economic future of the West Midlands, creating hundreds of jobs during construction and boosting the region after the pandemic.

“Mace and Dragados have some incredible experience delivering some of the world’s most challenging and exciting infrastructure projects, and I look forward to welcoming them to the team.”

In July 2019 – after contractors flagged concerns around risk transfer – HS2 Ltd was forced to restart the tender process for the revised cost of £570m, up from the initial price tag of £435m.

The initial design for the station was created by WSP and architects Grimshaw Architects and Glenn Howell, and inspired by the great arched roofs built by Victorian railway pioneers.

Incorporating sustainable technologies and a state-of-the-art eco-friendly design, the station will boast over 2,800m2 of solar panels located on platform canopies, along with the ability to utilise sustainable power generation and capturing rainwater.

Earlier this year, plans to integrate the existing Curzon Street Station into the new HS2 terminus on a long-term lease were approved by Birmingham City Council, who own the listed building.

In March, a large-scale archaeological programme involving 70 archaeologists unearthed the world’s oldest railway roundhouse which is expected to be partly restored and placed on display.

HS2 is a new high speed railway expected to link up London, the Midlands, the North and Scotland serving over 25 stations, including eight of Britain’s 10 largest cities and connecting around 30 million people.

The construction of the new railway is split into three phases with Phase One linking London and the West Midlands; Phase 2a linking the West Midlands and the North via Crewe; and Phase 2b completing the railway to Manchester and Leeds.

According to developers, “HS2 is a state-of-the-art, high-speed line critical for the UK’s low carbon transport future. It will provide much-needed rail capacity across the country, and is integral to rail projects in the North and Midlands – helping rebalance the UK economy.

“By building a new railway line, HS2 takes fast trains off the existing railway and places them on to their own dedicated tracks, better connecting our major towns and cities. This then allows slower, local trains to bunch up on the existing lines, freeing up space across the country for many more commuter services and freight trains.”

High speed trains will travel between London and Birmingham on 140 miles of dedicated track. They will pass through more than 32 miles of tunnels and over 10 miles of viaducts, delivering quicker journeys on more trains with more seats. Phase One has a funding envelope of £35bn-45bn and will open between 2029 and 2033.

Once operational, HS2 will serve over 25 stations connecting around 30 million people. HS2 will significantly improve connectivity in the North and Midlands and will also integrate the existing network serving stations into Scotland, creating 500,000 extra jobs and 90,000 homes around HS2 stations.

WATCH | What is HS2 and how will it work: