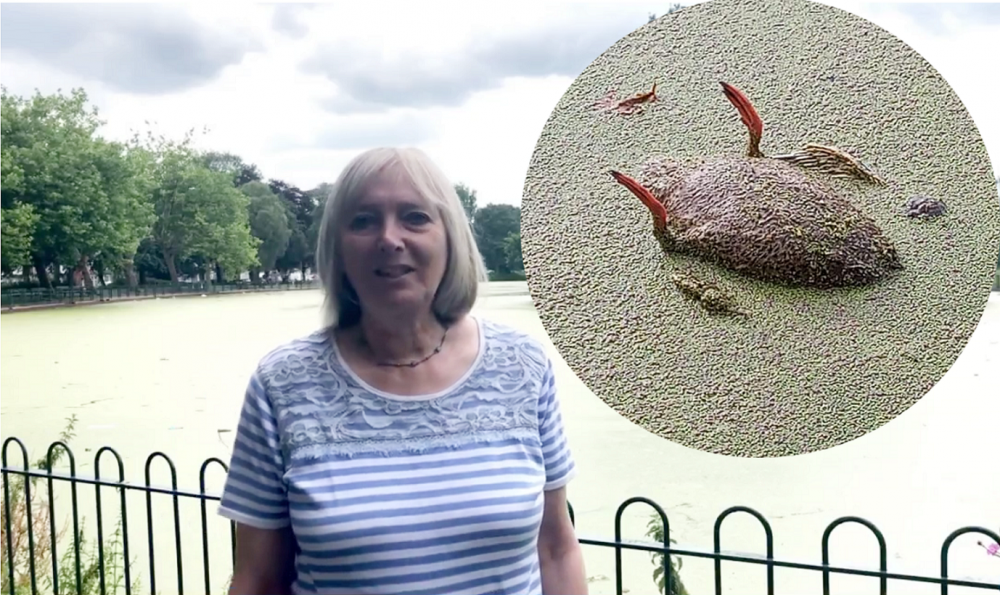 Cllr Deirdre Alden (Con, Edgbaston) visited Small Heath Park to inspect the lake after reading reports about ducks dying in what community groups have described as a “contaminated and polluted” lake.

The grim condition of the water in the Small Heath Park lake has resulted in the death of fish and waterfowl, with recent news of the tragedy reaching city politicians.

Cllr Deirdre Alden, shadow cabinet member for Street Scene and Parks, visited Small Heath Park after I Am Birmingham last week exposed the horrendous state of the lake captured in pictures taken by a local resident which showed a dead duck floating in the water.

Deeply saddened and alarmed by the shocking state of the lake, which appeared thickly coated with green algae, Cllr Alden shared her dismay in a video she posted to social media.

In the video, she said: “I’m here today in Small Heath Park. And it’s really rather a sad sight. What should be a lovely park in the middle of the summer holidays is looking very sad.”

Referencing resident reports of floating dead duck carcasses covered in the green algae which currently envelops the lake, Cllr Alden said, “and it’s particularly looking sad because of the green algae on top of the water which has caused a lot of the birds in the park to die.”

She also revealed “£1.6million less” is being spent annually in Birmingham parks by the council which has led to vital services being cut; and called for more funding and action from Labour-led Birmingham City Council to deal with the crisis in Small Heath Park rather than leaving local residents and gallant volunteer groups to fish out dead ducks and geese from the polluted waters.

She said: “We’ve got this situation and there are birds dying, I think the council should move in and do something about it. They should have removed the dead birds quickly. Unfortunately, it seems that residents have had to do that.

“The council should do something about clearing this water because there are still some live birds here and the water is absolutely terrible.”

Cllr Alden is also very worried that unless immediate action is taken by the council, there will be further loss of wildlife in Small Heath Park.

“If something isn’t done quickly, more birds are going to die and that’s terrible for the wildlife.”

“It’s terrible for the children in the area, who come to the park to enjoy themselves, and to see a really sad sight like this. And worse still, they might see some dead birds, which will be awful.

“So I think the council needs to do something about it now.”

Local residents have continually raised concerns about the poor condition of the lake in Small Heath Park for nearly two years. Park visitors have reported seeing dead and rotting birds in and around the lake.

Community members say they have become frustrated with the lack of action from animal welfare charities to remove the decomposing carcasses from the lake and there is mounting anger at the Environmental Department which has failed to drain the polluted water.

Cllr Alden told I Am Birmingham that it was “a very worrying situation” and she would take steps to liaise with relevant departments to raise awareness which will hopefully result in some much-needed, and long overdue, action taking place to clean the water and making the lake safe for wildlife.

Further to the serious issue of the polluted water of the lake, which is killing off ducks and geese, Cllr Alden is also concerned about park visitors who feed the birds which leads to serious harm.

“There’s another problem here in that people have been feeding the birds. And there is a big sign over there which says you could be fined £70 pounds if you feed the birds. But I don’t see anybody enforcing it.”

Cllr Alden confirmed she has written to Cllr John O’Shea (Lab), council cabinet member for Street Scene and Parks regarding the matter.