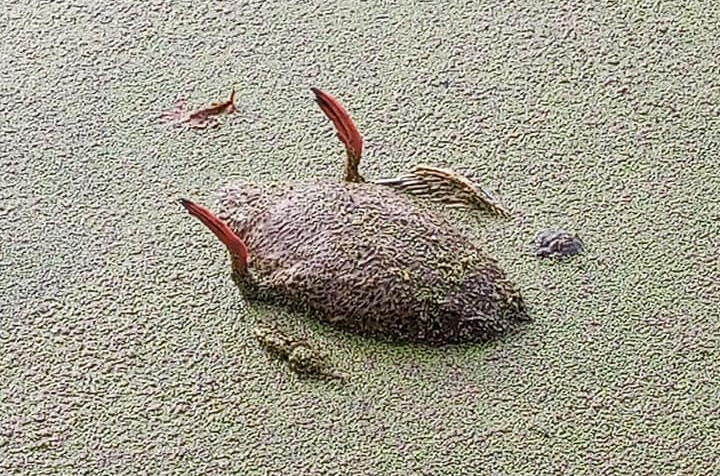 Residents are demanding immediate action to save the wildlife that inhabits the lake in Small Heath Park after another dead duck was seen floating in the ‘filthy’ water on Saturday (31 July).

Small Heath residents took to social media to vent their anger at the lack of action by authorities after pictures emerged showing another carcass of a duck in the foul waters of the lake.

People have been left deeply shocked and saddened after seeing photographs of dead wildlife floating and rotting in the murky lake inside Small Heath Park.

Park visitor Jess Smith was horrified and appalled when she went to Small Heath Park on Saturday and saw a dead duck in the lake. She took pictures and shared her alarming discovery on social media in the hope of organising a volunteer group to collect the dead duck and saving other waterfowl from harm.

She wrote: “Is anyone free tomorrow evening to come and help pull out some dead birds from a pond and also retrieve dying or still alive ones, and try and find a rescue centre to take them in?”

Jess also mentioned that she contacted some wildlife rescue centres, both yesterday and on previous occasions when she discovered wildlife in danger in and around the lake, but to no avail.

She stated that she previously got in touch with the RSPCA but is still waiting for a response “months down the line” and one wildlife rescue centre told her “they cannot come out and said call the radio”.

She added: “I’ve asked every rescue centre I can think of who might be able to help and are local.

“No one will help or come out.

“So rather than leaving more birds to die I will go myself.”

Local residents are upset and angry at the latest discovery of dead waterfowl in Small Heath Park.

This alarming issue has been ongoing for almost two years with park visitors periodically finding dead birds and fish in the filthy and rank waters of the lake.

“We were told that people should stay away from the water. They have even put up some notices on the fence railings warning people not to go into the water.

“We have been constantly asking the authorities to give a written report on the cause of the death and the health of the water in the lake. They keep telling us that they are still waiting for the laboratory report.

“Birmingham City Council has failed again, and they have shown us that they don’t care about the safety of the wildlife or the people who use the park.”

Mishelle Keany, from Small Heath, said: “The RSPCA know about this from a few months back when two swans were found brutally killed with necks broken.

“It seems Environmental Health and the RSPCA are not being thorough with the deaths of wildlife. It’s very sad and frustrating.

Chez Dee, writing on the Facebook page where the photo of the dead duck was shared, also mentioned the lack of engagement by elected officials and authorities: “Awful situation, so frustrating that none of the charities, Council or Police are bothered.”

The lake in Small Heath Park has been the centre of an “environmental apocalypse” in the last two years with residents repeatedly reporting and highlighting the polluted condition of the water and the almost weekly death of wildlife.

Local volunteer group The Waste Warriors, based in Small Heath, have previously carried out clean-ups of the lake and fished out rotting carcasses of Canadian geese and ducks using homemade equipment. The waters of the lake will continue to have a detrimental impact on wildlife unless an urgent draining and cleaning project is carried out by the authorities say residents.

(Visited 893 times, 1 visits today)
https://www.iambirmingham.co.uk/2021/08/01/residents-demand-action-ducks-die-filthy-small-heath-park-lake/https://www.iambirmingham.co.uk/wp-content/uploads/2021/08/229382585_10165554601525471_4167757339761492994_n_pe.pnghttps://www.iambirmingham.co.uk/wp-content/uploads/2021/08/229382585_10165554601525471_4167757339761492994_n_pe-300x198.png2021-08-01T17:09:10+00:00Rangzeb HussainAnimalsEnvironmentNewsB'ham,Birmingham,Birmingham City Council,Brum,Canadian Geese,community,Ducks,England,Environmental,Facebook,Friends of Small Heath Park,I Am Bham,I Am Birmingham,Midlands,Nature,news,parks,Parks and Recreation,Police,pollution,Rangzeb Hussain,RSPB,RSPCA,Small Heath,Small Heath Park,Swan,UK,West Midlands,West Midlands Police,WildlifeResidents are demanding immediate action to save the wildlife that inhabits the lake in Small Heath Park after another dead duck was seen floating in the 'filthy' water on Saturday (31 July). Small Heath residents took to social media to vent their anger at the lack of action by authorities...Rangzeb HussainRangzeb Hussain[email protected]AuthorI Am Birmingham
« Lady Leshurr, Junior Giscombe, Janet Kay and Omar among stars to perform at Solihull festival
Man arrested over fatal stabbing of teenage girl in Birmingham »