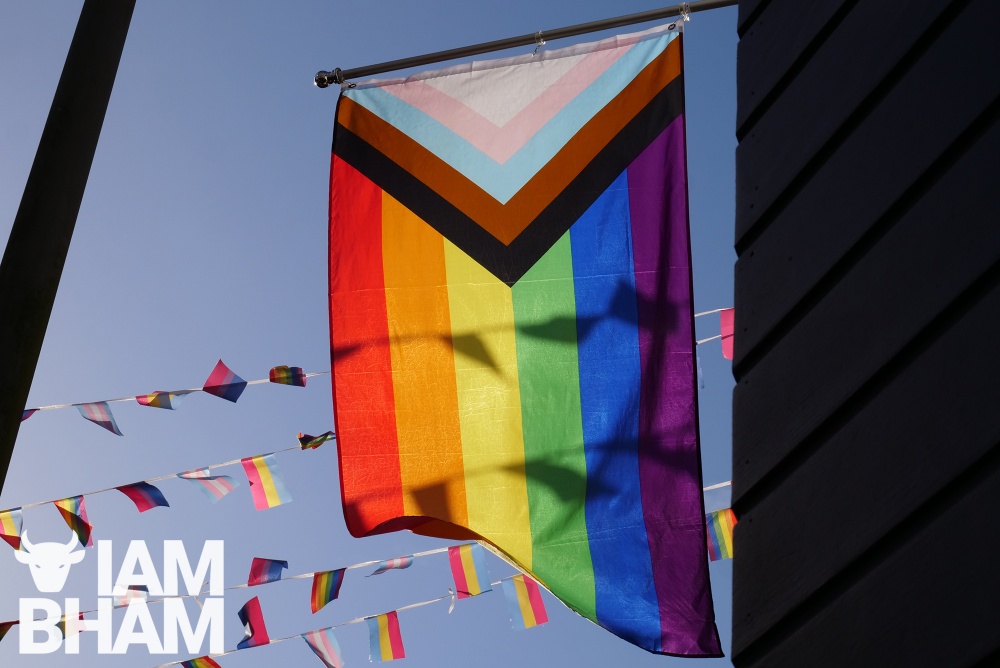 A second major demonstration against recent homophobic attacks in Birmingham is being held this weekend (Photo: Adam Yosef)

A protest rally in solidarity with Birmingham’s LGBTQ+ community will be held in Birmingham this weekend.

The event is taking place following a series of hate crimes committed against members of the gay, bisexual, lesbian and trans community in the city.

Following on from the first protest last Thursday (14 October) outside the Nightingale Club, Birmingham’s oldest and largest LGBTQ+ venue, a second demonstration has been planned to take place this Sunday (October 24) at 1pm.

Members of the community will gather at the Chinese Pagoda in Holloway Circus, which is situated outside the Birmingham LGBT Centre and is near where victim John-Paul Kesseler was attacked.

Organised by Birmingham Against LGBTQI Hate, the protest will host speakers, LGBT+ individuals and groups, allies and guest speakers. According to publicity for the event, attendees “are encouraged to bring along posters, banners, rainbow flags, colour, pride and symbols of hope”.

Protest organisers said they are “calling for more to be done to protect the city’s LGBTQ+ community and to make the city’s Gay Village safer, as well as identifying anti-LGBTQ+ hate crime which may go unreported in other parts of Birmingham where it might be harder for LGBTQ+ victims to come forward.”

Saima Razzaq, Head of Diversity and Inclusion at Birmingham Pride, has been supporting the recent protests.

“Last week’s protest brought together hundreds of people who are united against hate. Now is the time for change.

“It’s been positive to see Birmingham City Council taking the lead this week, bringing together stakeholders to create an action plan to ensure a safer Birmingham for LGBTQI communities,” she said.

“We must continue with this momentum and mustn’t become complacent, there’s a lot of work to be done and this includes a city-wide education piece to ensure we’re not alienating those caught at the intersection of different communities.”

Salman Mirza chaired the protest last week outside the Nightingale Club. He said: “The protest is a sign of solidarity. We’re basically saying: ‘this is absolutely not acceptable and we will not tolerate it’.

“We are united against this type of bigotry. We’re also very angry. Why is this going on? You don’t have to be part of the LGBTQ+ community to stand against these crimes.

“It’s a culture war. You have the LGBT community fighting for equality, but some bigots in the world think they’re trying to take over, or they want more, but they just want equality.”

Steph Keeble, director of the Birmingham LGBT, the city’s leading charity advocating for and supporting lesbian, gay, bisexual and trans communities in the city, added: “I was really shocked and appalled to read about the homophobic attack that took place over the weekend in Birmingham’s Gay village, the second extremely violent incident in a couple of weeks.

“At a time when hate is rising it is important that we come together as a community in solidarity and in strength, as we have many times in the past when we have fought for basic human rights, a fight that sadly – as these incidents show – is still continuing.

Police have arrested a man over a homophobic hate crime in which a man was attacked with a bottle in Birmingham’s Gay Village.

Police launched an investigation, describing the violent assault as “abhorrent”, revealing the 38-year-old victim had been struck with a glass bottle and whacked with an iron bar.

Kesseler, from Moseley, said he was targeted by a homophobic thug for “holding hands with another man” while walking along Holloway Circus in the early hours of the morning on his way back to a hotel after a night out in the city.

Kesseler said: “We had all been to the Gay Village and were walking towards Holloway Circus. I was going to a hotel with a close friend and we were holding hands, walking towards the Pagoda.

The callous attacker jumped into his car after the appalling hate crime and fled the scene.

Kesseler’s experience is the latest in a series of attacks targeting members of the LGBTQ+ community in Birmingham.

As many incidents continue to go unreported across the city, key incidents that took place in and around Southside’s Gay Village were highlighted after being reported to authorities.

Matt Williams, known as “Dahliah Rivers”, is a drag artist who also  forward with their experience of abuse after other recent attacks were reported in the media.

Williams was wearing full drag when a man threw a liquid out of a car window in the street outside The Nightingale Club, the city’s oldest and largest gay venue, at around 2.30am on August 6 (Friday).

The 26-year-old, who regularly performs at the popular LGBTQ+ venue, was struck in the face on Kent Street in the heart of the Gay Village.

“The area is notorious for a car full of people driving down the road hurling abuse. The police are aware of it,” Dahliah said.

“I have to get people now to walk me down to The Village, which is where I get changed. I don’t feel safe even walking down one street.”

The recent attacks in the Gay Village and impact on LGBTQ+ individuals have brought together members from across the community and their allies.

Last Thursday (October 14) hundreds of people came together to voice their anger and frustration at the attacks and demanded action be taken to make the city’s Gay Quarter safer, with some calling on the area to be pedestrianised.

Councillors, police officials and activists gathered outside the Nightingale Club waving rainbow flags, placards, banners and chanting in solidarity with victims of attacks, who also spoke at the rally. The event, chaired by Salman Mirza and Geoff Dexter, was organised by Birmingham Against LGBTQI Hate, a newly formed coalition of diverse community members, activists, educators, trade unions and allies.

The protest was followed by a summit held with some members of the community by local officials on tackling safety, led by Cllr John Cotton, Cabinet Member for Social Inclusion, Community Safety & Equalities.

Yesterday (October 21), a show of solidarity was held by individuals near Hurst Street as a continued demonstration of strength in the face of adversity. LGBTQ activist Khakan Qureshi led a group of supporters as they backed the #HandsNotHate campaign which has been trending since last week’s protest.

According to Qureshi, the action was key to building a united base of ground support to ensure the community is protected and heard. He urged community members and allies to attend a second solidarity protest which will be held on Sunday (October 24) at 1pm outside the Birmingham LGBT Centre on ‘Pagoda Island’ in Holloway Circus.

According to organisers Birmingham Against LGBTQI Hate, they want attendees to “bring flags, banners, posters, placards, colour and pride” to show solidarity to the cause. “Let’s stand united for peace, united against hate.”

Hashtags #HandsNotHate and #BrumAgainstHate are trending online as part of the campaign.