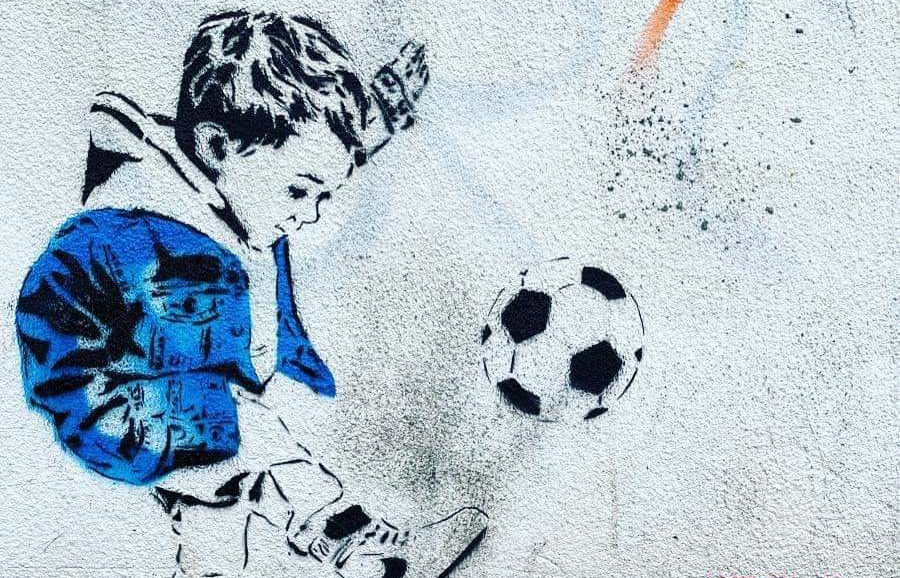 A poignant street art tribute to little Arthur, who loved the Blues, has been painted in Birmingham (Photo: Facebook)

A poignant street art tribute has been painted overnight in the Aston area of Birmingham to Arthur Labinjo-Hughes, aged 6, who tragically lost his life at the hands of his stepmother and father in Solihull.

The stencil art was painted in Trinity Street, Aston, a day after the killers of little Arthur were jailed at Coventry Crown Court (Friday 3rd December).

The people of Birmingham continue to offer tributes to little Arthur Labinjo-Hughes who was only aged six at the time of his tragic murder. Saturday’s match against Millwall saw Blues supporters offering up a minute’s applause in the sixth minute of the game, and balloons were released outside Arthur’s home as a heartfelt tribute to the young lad who was a Birmingham City FC supporter.

The tribute is thought to be the work of a secretive Birmingham street artist dubbed ‘Disney’ who has previously painted pieces calling for justice for the 21 victims of the Birmingham Pub Bombings which took place in 1974.

The shocking, and deeply disturbing, killing of Arthur Labinjo-Hughes from Solihull has caused public outrage across the nation. Social media posts about the abuse and killing of little Arthur include demands for the death penalty to be brought back for crimes such as the murder of children.

There is also anger and frustration being leveled in online posts against police and social services for failing to detect the horrific abuse that Arthur suffered and for failing to offer protection to the child before he tragically lost his life.

At Coventry Crown Court on Friday (3rd December) Justice Mark Wall QC described the couple as “sadistic” for their brutal treatment of little Arthur which tragically culminated with the horrific death of the young boy. The poor little victim was covered in 130 bruises according to a medical report.

The catalogue of horror perpetrated against the defencless child included restricting access to drinking water, starvation, poisoning him with so much salt that properly calibrated hospital equipment was unable to give reliable readings, isolation from his extended family, forced to live a solitary existence, made to stand for prolonged periods in the hall, made to sleep on the hard floor without a mattress, and a constant bombardment of physical and verbal abuse.

Stepmother Emma Tustin was jailed for life with a minimum of 29 years after she was found guilty of murdering Arthur Labinjo-Hughes. His father Thomas Hughes was convicted of manslaughter and jailed for 21 years.

Prime Minister Boris Johnson stated that “no stone would be left unturned” in the search to find out out what went wrong in tragic case of Arthur Labinjo-Hughes.

Commenting on the appalling tragedy on Friday, the Prime Minister said: “I just want to say, on the tragic and appalling case of Arthur Labinjo-Hughes, like many people I find it hard to read it, let alone to understand how people could behave like that to a defenceless little child.

“I’m glad that justice had been done, in the sense that they have both received tough sentences, but that is absolutely no consolation, and what we’ve got to make sure now is we learn the lessons about that case, we look at exactly what happened, what else could have been done to protect that child.

“It is early days, but I can tell you this, we will leave absolutely no stone unturned to find out exactly what went wrong in that appalling case.”

On Monday the Education Secretary Nadhim Zahawi will be make a statement on the case to Parliament.

Mr Zahawi said: “We are determined to protect children from harm and where concerns are raised we will not hesitate to take urgent and robust action.

“We will not rest until we have the answers we need.”