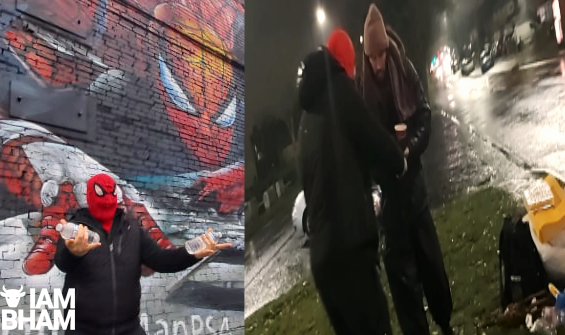 'Spider-Man' swings into Birmingham to help the homeless during Christmas (Photo: Ali Akbar)

Birmingham had its very own Marvel superheroes delivering food to the city’s homeless and vulnerable this Christmas as community volunteers brought some festive cheer and warmth as they delivered food parcels dressed as Spider-Man.

Members from The Waste Warriors community volunteer team from Small Heath went around the city on Christmas Eve and Christmas Day delivering food, hot drinks, water and blankets to the poor.

A volunteer faith-based team inspired by their Islamic faith, known as The Waste Warriors, switched over from their usual community work which includes clean up operations around parks, to delivering food parcels to the poor and destitute during the Christmas holiday period while dressed as the popular comic-book web slinger.

Members of the team went out on Christmas Eve and Christmas Day handing out over 150 parcels of food and drink around various parts of the city including Stetchford, Digbeth, Hodge Hill, Small Heath, Ladywood, Sparkhill, and Balsall Heath.

Speaking exclusively to I Am Birmingham about the Christmas food drive in the city, Ali Akbar from The Waste Warriors explained that feeding the poor and offering support to fellow human beings is part of his religious duty as a Muslim.

It was while watching a Spider-Man film recently which gave The Waste Warriors team the idea of carrying out the charity work while dressed as the iconic comic-book character and bringing smiles to poor and impoverished individuals.

Akbar outlined how the idea came to the team: “We watched the Spider-Man film the other night and when Uncle Ben says to Peter Parker “with great power comes great responsibility” we thought we can feed the homeless.

“We contacted family and friends and started collecting food, drinks, and blankets, and sorting out boxes to hand out during Christmas.”

Bilal, from the Waste Warriors team, said: “We felt it would be a fun idea to give the parcels dressed as Spider-Man and give people something to smile about.

“As Prophet Muhammad (peace be upon him) said ‘even a smile is charity’.

“Too often people see Islam in a negative way, so we thought it would be nice to do something positive and fun.

“We wanted to cheer up and warm people as another challenging year comes to an end.”

Bilal, added: “The reason why I carry out charity work and help homeless people is to remind myself to appreciate my life and not to take things for granted.

“Anyone can become poor and destitute and it’s important to reach out and help others during their time of need.”

Team member Kamran Ali mentioned the cold season which hits the end of each year and causes intense misery and health issues to poor people who are exposed to the harsh elements.

He said: “The cold temperatures during the winter can lead to death for those who have no shelter, so we also handed out blankets during our Christmas food drive.”

Akbar shared a poignant story about one individual he met during the Christmas food food drive who literally has “no way home”.

“It was heartbreaking,” said Akbar. “This poor guy on Soho Road had no home, no shelter, and he’d spent hours shivering in the winter cold.

“He desperately needed shelter, and was seriously thinking of finding a way to get into jail so he could escape the freezing temperatures.

“It was a like a modern day Nativity story. No room anywhere for him in the city.

“We tried to call several hostels for him but they were all running at full capacity. No room at all.

“We got him some hot tea, pastries, a water bottle and blanket.”

Akbar, added: “We plan to continue this work, and liaise with places of worship such as churches, synagogues, mosques, gurdwaras and temples, and inspire communities to work together and offer help to the poor.

“As we went out and delivered food to the poor and needy in Birmingham almost every person we helped said “God bless you”. It was straight from their hearts. It had so much meaning. It moved us all very much.

“We saw people from various communities, both black and white, male and female, young and old, and they all made us realize that we are all one when it comes to humanity.

“No one would go hungry if everyone shared what they got. Our world would be a much happier place if everyone was kind and considerate to each other.”

He said: “The coronavirus pandemic has hit many families, some have lost loved ones while others have lost incomes and job security, the basic cost of living is rising, and more and more people are dealing with mental health issues.

“Putting food on the table or paying the heating bill during the winter have become real challenges.

“As a Muslim, as a member of society, and as a human being, it is important to reach out during these dark and divisive times and unite towards a better future where unity, charity, compassion and tolerance form the foundations of our world.”

This isn’t the first time super heroes have famously helped the homeless in Birmingham. In 2015, a mystery Spider-Man made global headlines after helping rough sleepers on the streets of the city. The unknown hero’s commitment to helping the needy went viral after I Am Birmingham broke news of the good deed.