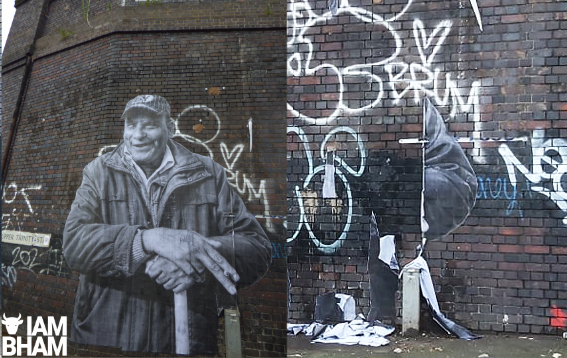 After last night’s initial damage to Foka Wolf’s street art tribute to Malik of Small Heath the rest of the celebratory giant poster has been torn down and destroyed by unknown vandals.

The much-loved pasteup of a living legend from the Small Heath area of Birmingham has been totally destroyed by unidentified vandals in Upper Trinity Street, Birmingham.

Earlier this month the enigmatic Birmingham street artist Foka Wolf produced a giant poster tribute to an icon of Birmingham who is recognisable to generations of Brummies.

The poster was an affectionate and celebratory tribute to a charismatic and beloved character from Small Heath known as Malik.

The striking artwork was pasted up in Digbeth on 1st December and received a positive response from the public and photos of the poster were shared across social media platforms and people from all over Birmingham, including the Small Heath and Bordesley Green communities.

People have been sharing memories of Malik from the 1980’s to the present day after news spread about the street art tribute in Digbeth by Birmingham street artist and social activist Foka Wolf.

After I Am Birmingham reported the vandalism suffered by the Malik tribute more damage has been spotted today.

The damage was highlighted by Ali Akbar from The Waste Warriors community volunteer team on Christmas Eve when he was on a food drive for vulnerable people.

Speaking exclusively to I Am Birmingham, Ali said: ” It was really sad to see the Malik poster in a vandalised state yesterday while we were out to deliver food parcels to the homeless on Christmas Eve.

“At first I thought it was the rain which had caused the damage but when I had a closer look I immediately realized this was a targeted act of vandalism.”

Ali added: “Bad as the initial damage was, with Malik’s head torn right off his shoulders, nothing prepared me for what I saw on Christmas Day when me and the team went out to deliver food around the local area.

“The damage to Foka Wolf’s amazing tribute was total and utter destruction.

“Only a few strips of the poster remain.”

“You can sense the intense anger of the yobs who did this. Pure rage was applied.

“Hopefully, once the garage across the road to the Malik tribute opens after the festive period, we’ll have access to some CCTV footage of the vandals who carried out the destruction.

“I just can’t understand how this can happen during the Christmas period.

“Humanity, kindness, acceptance, and tolerance are being replaced with hatred and division.”

Voicing the feelings of some people who have written on social media requesting the street art tribute to Malik to be reinstated, Ali said: “I hope Foka Wolf, who has produced some amazing work highlighting social injustice, racism, the plight of refugees, and celebrating Brummie heroes from diverse backgrounds, will return and produce another tribute to Malik.

“Malik and Foka Wolf offer us smiles and relief in dark times.

“Hopefully, this time maybe the tribute can be put up somewhere around the Small Heath and Bordesley Green section where Malik is often spotted dancing and waving to people.”

(Visited 2,436 times, 1 visits today)
https://www.iambirmingham.co.uk/2021/12/25/malik-small-heath-street-art-tribute-suffers-damage-digbeth/https://www.iambirmingham.co.uk/wp-content/uploads/2021/12/20.pnghttps://www.iambirmingham.co.uk/wp-content/uploads/2021/12/20-300x189.png2021-12-25T23:57:21+00:00Rangzeb HussainArtsBrumFeedCommunityNewsStreet LifeArt,B'ham,Banksy,Birmingham,Bordesley,Bordesley Green,Brum,BrumFeed,Brummies,CCTV,Christmas,Christmas Eve,community,dance,Deritend,Destroyed,Digbeth,England,Foka Wolf,Graffiti,Homelessness,I Am Bham,I Am Birmingham,Icons,Immigrants,Mad Malik,Malik,Midlands,Migrants,news,Pasteup,Photos,poster,Rangzeb Hussain,Refugees,Satire,Small Heath,Sticker,Street Art,UK,Upper Trinity Street,vandalism,West Midlands,YobsAfter last night's initial damage to Foka Wolf's street art tribute to Malik of Small Heath the rest of the celebratory giant poster has been torn down and destroyed by unknown vandals. The much-loved pasteup of a living legend from the Small Heath area of Birmingham has been totally destroyed...Rangzeb HussainRangzeb Hussain[email protected]AuthorI Am Birmingham
« Toddler killed after car crashes into fence and rolls over in Yardley
Brum ‘Spider-Men’ swing by to deliver food to city homeless with ‘no way home’ »