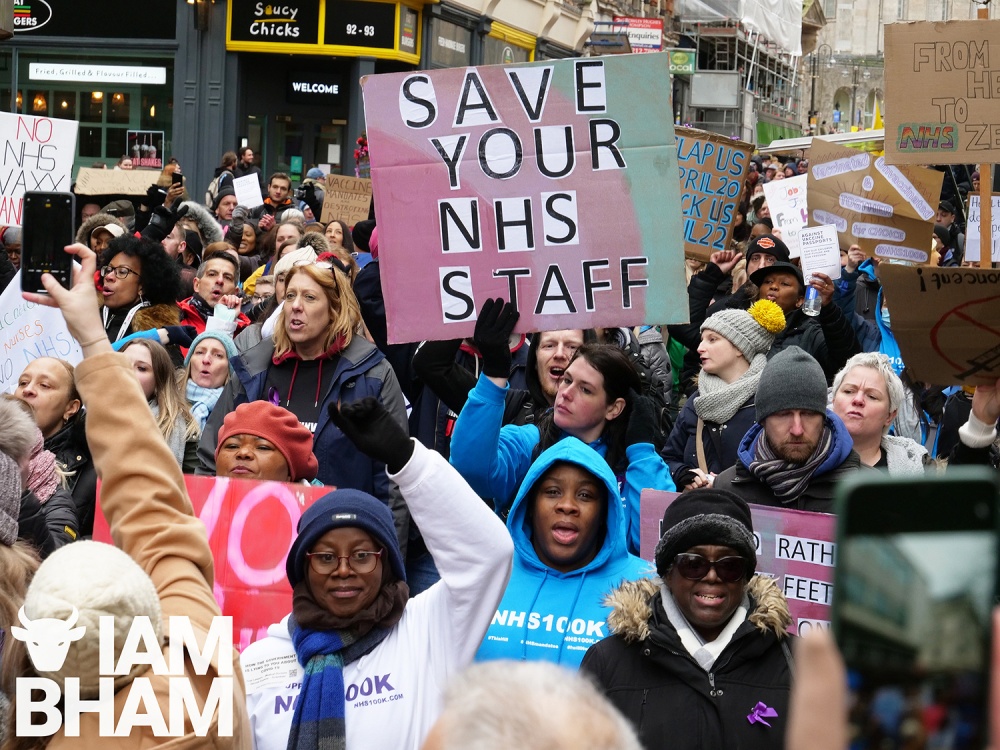 Hundreds of people gathered in Birmingham this afternoon to protest against mandated COVID vaccinations.

Congregating in Chamberlain Square, activists rallied as part of international action against a vaccination mandate that could see thousands of NHS staff lose their jobs.

The protesters, reportedly including nurses, doctors and other NHS staff, said they were challenging compulsory vaccinations which could see more than 70,000 NHS workers across the country lose their jobs due to being unvaccinated.

Billed as the “worldwide rally for freedom”, crowds converged in the city centre as part of global action, with mass protests also held in France, Italy, Austria and Germany. In the UK, similar events were held in London, Liverpool and Manchester.

Although the Government announced last week that Plan B COVID restrictions in England are being lifted, the protests went ahead with organisers claiming to be defending the NHS.

Saturday’s British demonstrations – including in Birmingham – were called by several organisations with varied anti-vaccination and anti-restrictions interests. Both vaccinated and non-vaccinated individuals were welcome to the protests.

Protesters said they feared NHS workers could face mass sacking for failing to meet the government’s mandatory COVID vaccine requirement, with NHS staff not jabbed are at risk of being removed their jobs in the coming months. Because a gap is required between vaccinations, anyone who does not have a first dose by February 3 will be fired.

A speaker at the event told the assembled crowd she was being “demonised” for refusing to be jabbed.

“NHS staff are about to be fired, are being demonised and called selfish and a danger to patients. This is so far from the truth.”

NHS100K, a non-political collective claiming to represent over 100,000 NHS staff, was represented at the protests with branded scrubs, t-shirts and banners.

The initiative, set up in November last year, say they “stand in favour of freedom of choice, bodily autonomy and informed consent”.

“Our aim is to connect the 100,000 plus health and social care staff in the UK who, it is estimated, will lose their jobs on April 1st 2022, as well as all of those who support our freedom to choose,” a statement on their website reads.

The march was then directed into the Bullring & Grand Central shopping centre as police and security were called, scrambling to control the mass gathering, which made its way into the main multi-storey retail space.

Protesters chanted and held aloft banners while posing for photographs but security staff restricted them to the top level of the shopping centre.

Some activists threw leaflets, newspapers and what appeared to be NHS scrubs from the top level of the Bullring to the ground floor, which cleaners then rushed to collect. Shoppers were also seen helping cleaning staff while security personnel cleared as much space as they could to ensure minimal disruption for Saturday shoppers at the venue.

West Midlands Police officers, some with dogs, were called to the busy shopping mall. There were minor verbal confrontations between some anti-vaccination protesters and Bullring security staff, but there were no reports of any criminal incidents or arrests being made.

After circling the top level for around 20 minutes, protesters were escorted outside and continued their demonstration through the city centre.

National protests come just two weeks before medical workers will be required to prove their vaccination status – with February 3 marking the last day they can book in for a jab. On February 4, those without jabs will face dismissal warnings. They will then be asked to work out their notice periods until March 31.

Recent amendments to The Health and Social Care Act mean that all healthcare workers, including student healthcare professionals, who have direct contact with patients or service users must be vaccinated against COVID-19. The new rules come into effect on 1 April 2022.

A third “Booster” vaccine is currently not included in the legislation so workers are considered vaccinated after two jabs.

Those with a legitimate medical exception are excluded from the new rules while anyone who has recently had COVID or is pregnant can apply for a temporary exemption.

However, in more recent developments, it was revealed these mandatory vaccines could be pushed back by six months, following nationwide protests over the requirement and amid demands by Tory backbenchers to drop the rule entirely.

Despite the threats to their career and several booster campaigns, more than 80,000 NHS staff – six per cent of the workforce – remain unvaccinated.

A Department of Health and Social Care spokesperson said: “Health and social care workers look after the most vulnerable people in society, who could face serious health consequences if exposed to the virus.

“Ensuring staff are vaccinated is the right thing to do to protect patients and those in care. The vast majority of NHS staff have had the vaccine which is our best defence against COVID-19.”