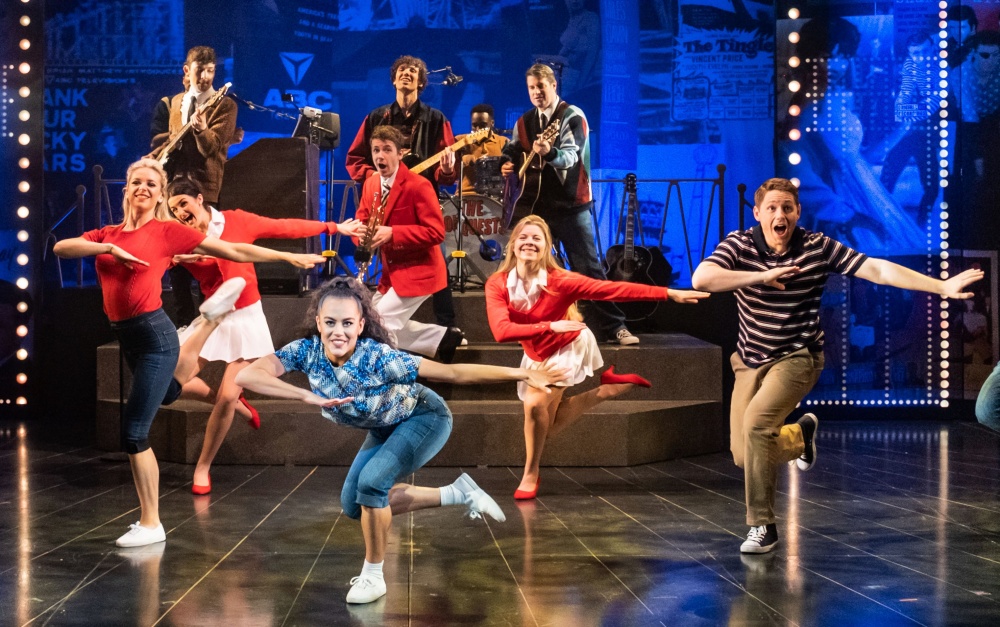 The much-loved and energetic jukebox musical Dreamboats and Petticoats returns for a spectacular third chapter at The Alexandra theatre in Birmingham.

The lavish musical overflows with the effervescent glitz and glamour of the 1960s as hit songs are belted out to get the audience rocking and rolling in the aisles.

The popular show is inspired by the series of Dreamboats and Petticoats albums which have become massive chart toppers. The albums, and the stage shows, feature some of the most memorable and bestselling rock ‘n’ roll songs from the fifties and swinging sixties.

The book for the show is by legendary scripting duo Laurence Marks and Maurice Gran who are renowned for their work across the decades which includes Birds of a Feather, Love Hurts, The New Statesman, and Goodnight Sweetheart.

The critically-acclaimed original show has spawned sequels and now the third instalment arrives to entertain Birmingham audiences at The Alexandra theatre.

The latest chapter of the nostalgic music show is entitled Bringing on Back the Good Times, and the charming characters who were first introduced in Dreamboats and Petticoats return once again to light up the stage with hit songs.

The formulaic narrative, which basically allows the writers to stitch scenes between the musical numbers and keep the show moving along at a cracking pace, follows the tale of two musicians – the sensitive and sincere Bobby and the sharp and rakish Norman – who are both searching for success.

The success for the their band, when it arrives, comes from an unexpected source. Bobby’s girlfriend Laura, who is also a singer, sees her star power ascending and she finds a way of helping her friends Bobby and Norman find a booking at a Butlins holiday camp in Bognor Regis.

The ups and downs of young love are never allowed to darken the fizzy sweep of the music as one song merges into the next to give the audience a night of the feel-good factor which has long been missing since the COVID-19 pandemic. The focus of the show is on the romance, comedy and the frothy energy inherent in the music which envelopes the stage.

The script stays on the right side of light and love, and the lives of the characters convey a sense of discovery and joy through the magic of music and dance.

This show is daring and exciting because it dispenses with lip syncing and goes straight for the jugular with live singing with a live backing band that absolutely invigorated the audience. The thrill of hearing live music and vocals in a packed venue venue after the lockdown was a cathartic moment for many people in the audience.

The performers in Dreamboats and Petticoats pulled out all the stops to deliver a truly spellbinding night of music and dance. The two main characters – Bobby and Laura – were sung by David Ribi and Elizabeth Carter. They both shared a dreamy chemistry which added a touch of warmth that went beyond a stage performance. They both sang with passion and sincerity and their romantic depth was felt in every scene that they shared.

Alistair Hill as Norman is a flirtatious rouge who knows how to use his talent as a singer in a band to lure women into his sticky parlour. However, by the end of the show he makes the audience feel for him despite his flaws. His comedy timing is impeccable, and his vocals in all of his musical numbers are delivered with a real relish. His fingers seem to caress each musical note that leaves his mouth. Small touches like that elevates his performance and makes the audience linger on the lyrics.

It was a real coup for the show creators to get 1960s singer and actor Mark Wynter to take on the role of Larry who plays a pivotal role in the future of Bobby’s band. Wynter brings a fruity touch to his role, there’s shades of light and dark on display. The way he delivers his dialogue, and his sly movements, make him appear at one moment as a sweet and kind spirit and others as Mephistopheles. Wynter’s hidden talents as a singer and dancer are fully revealed by the climax of the show when he dazzles the audience with a medley of his hit songs from the golden era.

Lauren Anderson-Oakley (as Sue) and Samara Clarke (as Donna) play their roles with conviction and their singing is perfectly pitched in each of their numbers. Clarke was breathtaking in a number where she has to prove to a Butlins manager that she is able to host a physical education session for the campers. She takes control of that entire scene like a beautiful and feral force of nature. Dressed in blue jeans and a top, with her gorgeous frizzy hair looking like a graceful mane, she belts out the song in a zesty manner while dancing and moving like a playful lioness. To dance, to sing, to act, and to smile in a scene where every muscle and vocal chord are being tested to the limit is a mark of a real artist. Clarke has a bright future ahead of her.

Another performance that left a huge impression on the audience was David Benson who appeared as Kenneth Williams in Act 2 of the show to present a segment where Bobby’s band take part in the Eurovision song contest. Benson is an absolute hoot in his impersonation of the iconic Carry On star, and he had the entire auditorium shaking with laughter.  His vocalisation of Williams’ melodramatic nasal delivery was uncanny.

The live band onstage were remarkable and gifted because in some of the scenes the musicians were required to act as part of a scene, or to take part in an ensemble dance set piece. A special mention must also be made to two very talented women who not only danced but also played saxophones. Lauren Chinery (baritone saxophone) and Chloe Edwards-Wood (tenor saxophone) looked amazing in the various outfits and shoes while they played their musical instruments and danced elegantly in the various dance extravaganzas.

Director Bill Kenwright keeps the action flowing, from drama to comedy, and from music to dance, the production is a riot of colour and delightful energy. There’s never a dull moment in this show. The staging is smooth and the transitions from one set piece to the next are carried out in a seamless way.

The gorgeous lighting by Nick Richings complimented the melodic pop melodies that echoed around the stage. Lush reds, deep blues and purples, gold and starlit sliver hues, and neon pinks all weaved in and out of each other like a 1960s kaleidoscope which blended beautifully with the musical cues.

Sean Cavanagh’s set design left the audience in no doubt about which era the characters’ tales were unfolding. The stage was decorated with posters of 1950s and 1960s memorabilia which included images of Buddy Holly, Cliff Richard, images of characters from The Beano comic, vinyl sleeves, advertising material for Frosties cereal, and ticket stubs for famous pop and rock concerts, etc. A floating neon sign for Butlins immediately transported the audience to the famous holiday resort. The art design was vivid, bold, economical and it wasted little time in conveying the time and location of the action in any given scene.

The costumes by Alexandra Stewart brought some glitz and glamour to the 1960s music scene with characters walking around in picture perfect vintage clothing that conjured up an atmosphere of cool elegance both for the ladies and men. The shoes were also very retro and stylish, and the ladies have to be commended for being able to dance so effortlessly while wearing high heels in some of the fast moving dance numbers.

Carole Todd’s choreography is so infectious, bubbly, and toe-tapping that the audience soon joined in and clapped in unison to the music and the dance steps, and by the finale people were standing up in the aisles and dancing.

As the show came to a climax and the performers took their bows, David Ribi – who plays Bobby in the show – looked out into the audience and made a poignant comment that was deeply moving.

He said: “The last two years have been tough.

“It feels so good to welcome people back into theatres.”

The words were received with rapturous applause. The show lived up to its name of Bringing on Back the Good Times. The warmth, the positive energy and the passion for life and love offered by the show act as a balm of hope after two years of darkness. Its time to let the good times roll.

Dreamboats and Petticoats plays at The Alexandra, Birmingham until Saturday 26th March