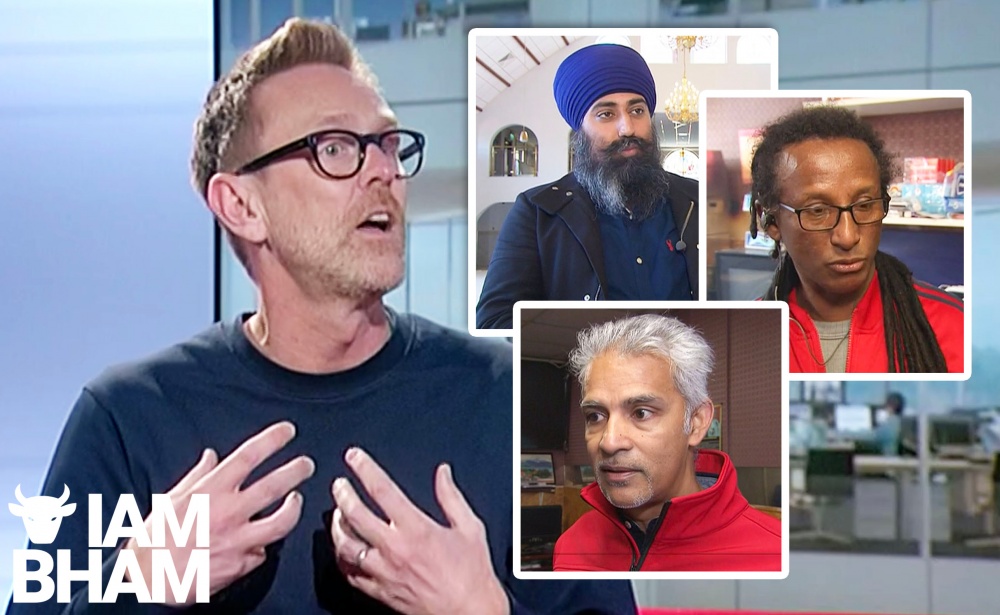 A Birmingham 2022 Commonwealth Games official has come under fire from community leaders after suggesting Birmingham does not “have enough large ethnically-led creative organisations” to help facilitate reaching out to more diverse communities.

Martin Green, the Chief Creative Officer for the Games’ organising committee, was responding to a question about whether recent concerns from members of the city’s South Asian community about a lack of engagement in inner city areas had merit.

Interviewed by Nick Owen on BBC Midlands Today yesterday (7 April), Green was asked if he thought the criticism from some members of the community were fair.

But his response, which suggested an absence of “enough large ethnically-led creative organisations” was a contributing factor, has been lambasted by Black and Asian organisations working in the city, with some describing it as “a bare faced lie”.

Green told the BBC: “There is some truth in it in the sense that we don’t have enough large ethnically-led creative organisations in the city and one of the things the festival’s seeking to do is address that, and so that’s why from the outset we said we would particularly lean into younger emerging artists so we can feed the pipeline and hopefully in the end get more established businesses.”

However, organisers of the Birmingham Mela derided Green’s comments, stating: “This is total disrespect to organisations like us and loads more who have produced large creative events!”

Green’s comments were also denounced by community and faith leaders who live and work in areas such as Lozells, Handsworth and Perry Barr; the latter being where the Games opening and ceremonies are expected to be held.

Aftab Rahman, Director of Legacy West Midlands, said the explanation from Green was “absolutely 100% shameful. I wonder how big the organisations that he has funded are compared to some of the ones we know.”

Rahman, who was interviewed by the BBC ahead of Green’s comments being broadcast, said the Commonwealth Games wasn’t doing enough to engage with people from ethnic minority backgrounds.

“It’s been a real challenge. We’ve tried to reach out and give them opportunities to work with us and it’s not been reciprocated.

Concerns have also been raised about the lack of “trickle down” benefits for local businesses. Beiruke, who runs Eritrean cafe Rasta Coffee said more cultural events from Birmingham 2022 in Lozells would help encourage financial recovery for those affected by the pandemic.

“After the affects of this COVID, businesses are still struggling to survive,” he told the BBC.

“This opportunity would have been better to survive quickly instead of struggling again.”

The management team at Guru Nanak Gurdwara in nearby Smethwick revealed they had sent numerous letters to Birmingham 2022 organisers about how their congregation and community members could get involved, but claim their requests have failed to be heard.

Temple official Jatinder Singh said: “On a number of occasions we’ve asked for Perry the mascot to come out, just for that engagement with children so they can understand what is about to happen in Birmingham, so they can feel a part of it as well, but the response that we’ve got is that we haven’t got the resources available.”

Coinciding with community concerns, an open letter was submitted to Birmingham 2022 officials last week, co-written by a group of cultural industry leaders from the city.

The letter raises concerns about why “Indian, Bangladeshi and Pakistani communities seem to have been sidestepped and major contributors to this local culture and business innovation ignored” in relation to funding and sponsorship programmes.

An analysis of the distribution of the funding, carried out by professionals, found that only 10% of investment in Birmingham 2022’s Cultural Programme will be going directly to Asian, Black and Minority Ethnic companies.

The letter also claims diversity and inclusion forums had been introduced too late by the Games’ organisers to make any serious or effective impact.

In 2020, a similar letter endorsed by creatives from across Birmingham challenged officials organising the Games to take seriously concerns about unequal representation at the top of the planned event’s power chain.

Although Birmingham 2022 has been hailed by organisers as the ‘Diversity Games’, only one person of colour was on the initial Commonwealth Games Organising Committee Board.

“We’re working with everyone across the city”

Replying to accusations of Birmingham 2022’s commitment to diversity as just being rhetoric, Green said: “I think the actuality isn’t the case, if you look at everything we’re doing across volunteering, the learning programme, the opening and closing ceremony, you’ll see that we’re working with everyone across the city.

“In terms of the festival, really very simply if you go online and look at the programme as it stands, you’ll see that it absolutely reflects who we are here.”

Asked to respond to people in deprived wards who felt like they had been “sidestepped” by the Games, Green said: “Of course, you can always live and learn and we’re very open about it, we take it and we act and things like that but I also think that there’s a little bit of misinformation out there, I think if you just get your information by scraping it off the internet, not the most trustworthy place.

“I think if people go to the actual programme and have a look at it, they’ll see that there’s a full range of activity right across the city and of course so much more to come. So I feel very confident that at the end of this, while a lot of this comment is of course valid, a lot of it will prove to be unfounded. I think we just need to let the programme roll out and we’ll see it’s all there.”

But Legacy WM director Aftab Rahman rejected the explanation, demanding a response to Freedom of Information requests which have been made questioning where Birmingham 2022 community funding has been allocated and spent: “Talking about misinformation and what we read on the Internet. I’ve asked Martin to release the actual figures. Still waiting on that.

“Once the circus has left town and all the resources have been used up.  There has been this trickle down theory for decades and it’s happening again. They have saved 20,000 jobs for local people to clean, cook and provide security.”

“This is a bare faced lie”

The comments from Birmingham 2022 official Martin Green have also angered Black, Asian and ethnic minority creatives in the city, who feel the Games don’t need to address a so-called “lack of large ethnically-led creative organisations”, but rather accept they exist and engage with them.

Tru Powell, Director of the Aston Performing Arts Academy questioned “What constitutes large? It’s one thing saying you don’t know about them but it’s wild to say they don’t exist,” while spoken-word poet Kamil Mahmood retorted, “The wild thing about this [is there] are so, so many large ethnically led creative organisations in Birmingham… This is a bare faced lie.”

Actor, comedian and Good Morning Britain presenter Adil Ray described the debacle as “an embarrassment for Birmingham” and said the Games were “sabotaging the city’s communities.”

“Statements like this are demoralising Europe’s most diverse city who run some of Europe’s biggest Melas. How do small companies grow if they don’t get large contracts?”

City creative Nat Adele Edward-Yesufu was angered by the claim, tweeting, “Is he joking! He has got to be joking? Surely the amount of meetings and pitches his team had from me. The amount of conversations that went no where. The time my organisation wasted. To sit there and him to say this. I’m deeply disappointed. And it’s time for me to speak up!”

Brummie arts enthusiast Sapreena Kumari added, “This is really disappointing to hear, if you’re not looking in the right places (i.e. beyond your boardroom) you are going to miss the masses of talent we have in our diverse city.”

Speaking in her own capacity, Saima Razzaq, Head of Diversity and Inclusion at Birmingham Pride, said “businesses led by women of colour” were particularly overlooked.

“We’re forever trampled over and left behind. Enough with the excuses, can someone at CG22 please start offering solutions to rectify their collective failings. We will not be erased.”.

Bhangra DJ and music journalist Boy Chana said “The more I listen to this the more irate I get talking down to us like his white privileged we are ONE and if you want history and heritage” and Jehangir Malik, who works in third sector faith-based organisations, commented: “More of the same… from a place of privilege.”

City rap artist Tarju Le’Sano, who in 2019 launched a spoken word video to encourage north Birmingham arts investment, sarcastically described Green’s comments as “interesting”, adding he had “not seen anyone from Commonwealth Games at local ethnically lead creative events. We been outside for time now.”

Le’Sano is also an ambassador for Gallery37, a three-year arts empowerment programme for young creatives in north Birmingham, helmed by Saathi House in Aston and delivered by Punch Records, both community and creative arts organisations run by ethnic minority leadership.

“Is this the best you can do Birmingham 2022? Clearly remember meeting Martin and offering to support with connecting with ‘ethnic’ and ‘large’ outfits… No take up!”

“This man [Martin Green] should visit the brilliant organisations in Lozells, Handsworth, Aston, Small Heath. Commonwealth Games in Birmingham has been a disaster in terms of diversity. Best paid jobs to white men and women while cleaning, security and catering will likely be filled by BAME.”

A spokesperson for the BAME Labour Birmingham group argued the white leadership of the Birmingham 2022 Commonwealth Games was out of touch with ethnic minorities.

“We know there are major Black and brown people led creative organisations in Birmingham because we happen to know where they are. If your leadership team is mostly white then you don’t look beyond your own table. We are sick and tired of words that have no meaning or reality.

“When arms start waving and horrific terms such as “ethnic minorities” are being spoken by white people us black and brown folks know we are not allowed at the top table when funding resources are distributed. We are not in Devon we are multicultural Birmingham, Martin.”

Responding to the furore, Donna Fraser OBE, Head of Inclusion and Engagement for Birmingham 2022, said: “It is difficult to touch every single person in the entire West Midlands.”

She also blamed some of the problems on the coronavirus pandemic, and also not having enough time for preparation, for the failure in reaching out to Birmingham’s diverse communities.

However, despite the complications and problems, Fraser stated that the organisers of the games would endeavour to involve more people from across the various communities in Birmingham.