REVIEW: The Forgotten Soldier – a short film with a haunting plea for forgiveness and mercy 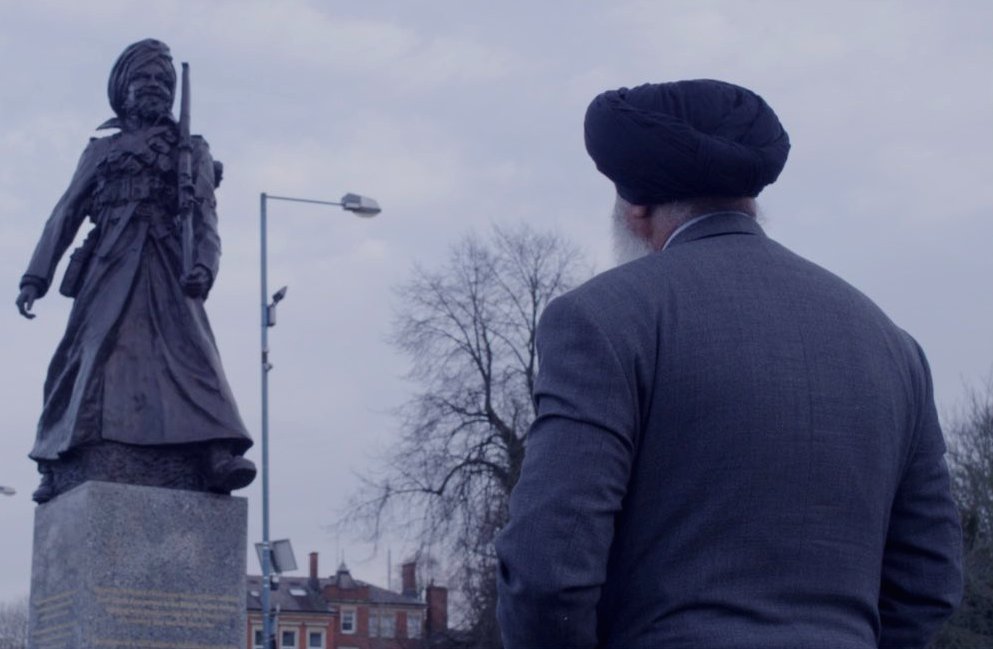 A new short film highlights the sacrifice made by Sikh soldiers during World War I (Photo: Airah Productions)

A new short film, shot on location in the West Midlands, shares a timely story about past, present and future, and makes an urgent plea for understanding during divisive times.

Director Neil Paul’s contemporary tale The Forgotten Soldier touches upon the sacrifices made by Sikh soldiers during World War I which have been largely confined to the dusty pages of history.

The Forgotten Soldier removes the veils of prejudice and racism to reveal a short story, inspired by real events, about the defacing of a World War I monument in Smethwick commemorating the contributions of South Asian soldiers during World War I.

The script uses the springboard of the 10-foot high monument being defaced to open up a wider story that touches upon several characters which leads to a tragic climax where the protagonists – and the viewer – are faced with moral dilemmas surrounding hate, justice and the cancerous impact of violent revenge.

The catalyst for the tragedy is an act of violence against an elderly Sikh man who’s come to see ‘The Lions of the Great War’ monument to his fallen brothers in arms. The old man stands in the cold twilight looking up at the colossal stone sculpture of a proud Sikh soldier standing to attention, looking out at a past that has been largely erased or ignored by historians.

The old man looks up and his eyes are lit with memories, and emotions ripple silently over his face as the sky overhead darkens and night prowls around him.

Soon, the insidious darkness of 21st century racism and hatred will attack the old forgotten soldier.

The short film is helmed by Wolverhampton director Neil Paul, who also takes a role in the film, and the vision that propels the central theme of the tale is the corrosive effects of ignorance and hatred.

There is an urgency in the drama that makes a compelling point about the importance of remembering the past, and more crucially, remembering the valuable contribution made by soldiers of colour whose tales of valour are all too often airbrushed out of history.

There is a scene in the film where a character makes a poignant and heartfelt point about school kids not being taught about the gallantry of Sikh soldiers, and how it took the passing of 100 years before a Remembrance Day monument was erected, and within days of it being unveiled the statue was defaced.

The dangers posed by ignorant bigots and hate mongers needs to be addressed, especially in the modern era where hate crime and Islamophobia are increasing at an alarming rate, and elected leaders are fuelling the racial divisions rather than addressing the problems.

Ironically, the location where the statue of the Sikh soldier was vandalised is the same region of the West Midlands that was visited by civil rights activist Malcolm X in 1965.

Malcolm X – El-Hajj Malik El-Shabazz – came on a visit of solidarity to Smethwick after accepting an invite from Avtar Singh Jouhl who was the secretary of the Indian Workers’ Association. The iconic civil rights campaigner arrived to the city following racial tensions in Smethwick.

Conservative MP Peter Griffiths had won the Smethwick seat in 1964 with the slogan “If you want a nigger for a neighbour, vote Labour.”

The Labour incumbent, shadow home secretary Patrick Gordon Walker, lost his seat in one of the most racist election campaigns in British history. When the defeated Walker left Smethwick Town Hall after the vote count the Conservative supporters screamed at him:

Racial tensions were running high and the people polarised, and Smethwick was seen as a real hotbed of racism. Some bars and pubs had signs displayed in windows stating ‘No Coloureds’.

Smethwick, Sandwell, Birmingham, the West Midlands, the United Kingdom, the cancer of racism runs deep, and it runs across decades, even centuries. The positive contributions made by Commonwealth citizens to the British Empire are glossed over, or diminished, and when a work of art is produced to commemorate the heroic efforts of Sikh regiments from the Punjab the monument is attacked in our modern era.

Paul’s short drama wastes little time in alerting the audience to the dangers of forgetting the past. Every scene is coloured by events that stem from a lack of understanding and a lack of reaching out. The characters exist in a limbo where emotions cloud reason.

Those looking for a slickly polished production and rich art design in this film may baulk at the technical aspects of the movie. However, the low-budget ambience, and the documentary flow of the short film helps to ground the edgy visuals towards truth.

Gurjant Singh’s cinematography is raw and pithy, often handheld, and the colours seem subdued. The West Midlands landscapes appear murky and grimy which adds to the atmosphere of looming tragedy.

The performance by Gurdev Singh – who plays Aatma Singh, the elderly man who visits the monument to his fallen comrades – is soulful and subtle. He conveys a myriad of emotions without a single word of dialogue or narration as he stands before the public work of art.

Singh’s aged face, eyes brimming with distant memories, his body posture displaying strength despite his years, his physical stillness, all of these magnetic factors weave together to compose a silent and heartbreaking monologue that is audible in the mind, rather than the ears, of the audience.

The actor taking on the role of a father demanding revenge for the attack on the elderly Aatma Singh is by West Midlands based actor Vimal Korpal. This talented artist relies on the power of his distinctive voice to produce his eerie performance.

Korpal’s character is never visualized, only heard. His calm and sedate vocal delivery as he issues orders for a hit sends a chill up the spine. Korpal delivers a powerful and effective performance merely through the instrument of his voice which he employs to devastating effect in the poignant drama.

At a time when television output is filled with wall-to-wall lifestyle shows, travelogues, and reality shows that demean the human experience, it’s vital that producers commission dramas that highlight topical and pertinent issues.

Director Neil Paul is planning on taking his short feature to various local and international film festivals and hopes the film leads to a much needed debate about how we remember the past. He also hopes the short film will lead to a full-length feature film at some point because the tale that the short drama showcases has so much potential.

The Forgotten Soldier makes a plea for society to remember, and to come together as a community of humanity.