REVIEW: Singin’ in the Rain – a night of Hollywood glamour in Birmingham 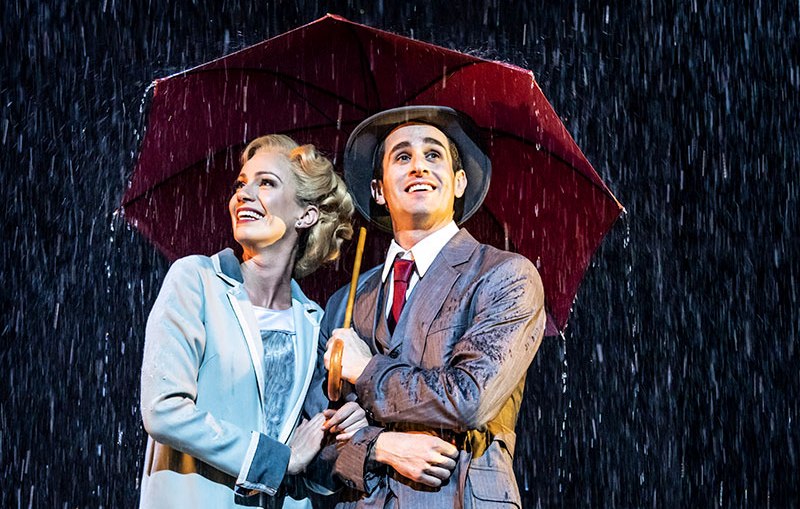 Singin' in the Rain showers love and warmth in a sparkling production (Photo: Johan Persson)

The timeless and charming Broadway and Hollywood musical Singin’ in the Rain comes to the Birmingham Hippodrome in a glorious shower of lilting music and dancing.

The Singin’ in the Rain tour lit up the Hippodrome stage in a spectacular and colourful night of entertainment.

The 1952 Hollywood film version of Singin’ in the Rain – directed by and starring Gene Kelly – has become a landmark film and is often considered to be one of the greatest musicals of all time. The stage version of the film has also become a critical and commercial success around the world.

The Singin’ in the Rain tour is currently on show in Birmingham and no cost has been spared in transferring the lavish and spectacular production onto the huge space offered by the Hippodrome stage.

The story of the show follows Hollywood’s transition from silent movies to talkies and the struggles and challenges this presents to stars and performers. The script uses the transition to showcase a story that combines drama, comedy, music, dancing and romance.

Sam Lips, a Broadway and West End talent, takes on the iconic lead role of Don Lockwood which was performed by Gene Kelly in the classic Hollywood film. Lips is not daunted by the long shadow cast by Kelly’s seminal characterisation of Lockwood and he has immense fun in the role as he dances and sings in a show that requires deep stamina and commitment.

One of the keys to the show is the warm chemistry shared between the two central characters of Don Lockwood and Kathy Selden. In this production Sam Lips is partnered with Charlotte Gooch (Strictly Come Dancing) and the spark of love between their characters is felt by the audience.

Gooch brings a really graceful and warm persona to the character of Kathy who is brought into the film studio to dub the screeching voice of a silent starlet who is having difficulty transferring to talking pictures. Selden’s scenes – whether she’s singing or dancing – always cast a magical glow across the stage.

Ross McLaren takes on the slapstick role of Cosmo (Lockwood’s childhood friend) and his highly charged performance fired up the audience with people laughing at his stage antics.

McLaren’s clownish and sweet facial expressions, his acrobatic dance movements and his magnetic connection with the audience were an absolute delight. This fast moving and zany man is a 21st century Norman Wisdom.

The thankless, but hugely humorous, role of silent actress Lina Lamont is performed by Jenny Gayner. Gaynor is totally convincing as an actress with a voice that sounds like a screeching high-pitched cat who needs a miracle if she is to make a successful transfer to talking pictures.

The hilarity that Gaynor invests in the role had the audience roaring with laughter in the aisles.

The dynamic choreography by Andrew Wright is infectious and frothy, with audience members bobbing their heads and shoulders in tune with some of the dance numbers. The dance moves in this show require a great deal of dexterity and flexibility and the cast rise to the task admirably.

All of the main cast, including the ensemble dancers, delivered high-powered and daring performances that verged on the acrobatic.

This production of Singin’ in the Rain was a sensory delight that dazzled the eyes with sensational use of prime colours by lighting director Tim Mitchell. The cinematic lighting brought the glitz and glamour of a Hollywood film directly into a live theatre.

The art deco set design by Simon Higlett conjures up the façade of 1920’s theatres which is accentuated by Mitchell’s sublime and imaginative lighting. The stage comes alive like a vivid and pulsating technicolour celluloid dreamscape.

Simon Higlett also weaves incredible style and elegance with costume designs which perfectly evoke the Roaring Twenties. The men and women parade across the stage in period perfect fashions that immediately – and stylishly – transports the mind to the era in which the story is set.

Now, about the rain…

This magical show doesn’t shortchange the audience when it comes to delivering an experience that will linger in the mind for days afterwards.

The rain pelting down upon the Birmingham Hippodrome stage felt so real and fresh, and it added an exciting and dreamy atmosphere to the production.

Apparently, over 14,000 litres of water is used in every performance of the show to create the rain, and in keeping with the current ecological mood of the world where recycling is becoming an important part of life, the water for the rain effect in the show is drained and cleaned after each performance and then reused.

Also, to keep the cast from freezing each night after being soaked, the water is kept warm as it rains down upon the singers and dancers on the stage.

Director Jonathan Church ensures the lengthy show – which runs for almost 3hrs – remains exciting and thrilling, keeping the audience entertained, with scenes designed in such a manner than there is never a dull or idle moment. The show moves at a brisk pace and pulses with kinetic energy.

This belter of a musical makes you want to run wild and free in the rain and dance fearlessly without restriction or judgement. A night out at the theatre to soak up a show like Singin’ in the Rain is the perfect remedy to wash away any blues or woes which may be raining down.

Lean back in your chair, open wide your eyes and let the music, sound and colour of Singin’ in the Rain drench you with exquisite pleasure.

(Visited 198 times, 2 visits today)
https://www.iambirmingham.co.uk/2022/06/08/review-singin-rain-night-hollywood-glamour-birmingham/https://www.iambirmingham.co.uk/wp-content/uploads/2022/06/054-800x509.jpghttps://www.iambirmingham.co.uk/wp-content/uploads/2022/06/054-300x191.jpg2022-06-08T14:00:58+00:00Rangzeb HussainDanceMusicReviewsShowbizWhat's OnAndrew Wright,Art Deco,B'ham,Birmingham,Birmingham Hippodrome,Broadway,Brum,Charlotte Gooch,choreography,dance,Don Lockwood,Entertainment,Gene Kelly,Hippodrome,Hollywood,Jenny Gaynor,Jonathan Church,Midlands,music,Musicals,news,Norman Wisdom,Reviews,Ross McLaren,Sam Lips,Shows,Simon Higlett,Singin' in the Rain,Singing,Stage,Strictly Come Dancing,Theatre,West End,West MidlandsThe timeless and charming Broadway and Hollywood musical Singin’ in the Rain comes to the Birmingham Hippodrome in a glorious shower of lilting music and dancing. The Singin’ in the Rain tour lit up the Hippodrome stage in a spectacular and colourful night of entertainment. The 1952 Hollywood film version of...Rangzeb HussainRangzeb Hussain[email protected]AuthorI Am Birmingham
« Sir Lenny Henry joins stars behind drama ‘My Name is Leon’ ahead of BBC television premiere
Commuter chaos at New Street Station as ticket machines out of action ahead of tech upgrade »