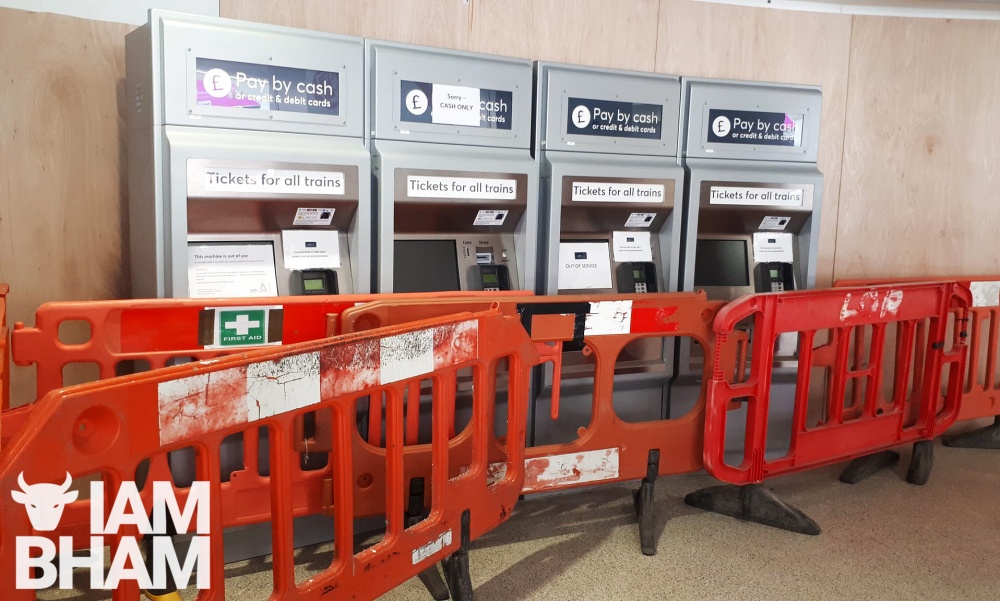 Tickets machines at New Street Station cordoned off ahead of replacement

Self-service ticket machines are out of action at New Street Station in Birmingham, forcing throngs of customers to queue for tickets and causing some to miss trains and connections or be delayed on their journeys.

To accommodate a refit of brand new ticket machines throughout the city’s main station, older models were largely out of action at the start of this week (6 June) with only a couple operational, causing commuters to either rely on pre-booked e-tickets via the Trainline app, or queue up to be served manually by staff during busy periods.

The vast majority of the machines were accessible but had signs displaying they were “out of order”.

By Tuesday (7 June), most of the ticket machines had been removed and new boarding had gone up in their place, with only four machines still visible, albeit cordoned off and inaccessible.

Initially, staff personnel confirmed the machines would be replaced and reopened by Tuesday evening but this morning (8 June) only two new machines had been installed and appeared be powered, but non-operational and still sealed off from public use.

Yesterday, a member of staff from the ticket office at the station told I Am Birmingham, “They’re down at the moment, we’ve having new ones. Hopefully they will be back to some kind of normality sometime this week.

“The majority of them were turned off yesterday to be emptied of cash, last night they were gone and hopefully today or tonight we’ll get some new ones in.”

Today, new machines had indeed arrived on the concourse in place of the old ones but only two machines, and still cordoned off behind security barriers.

Another member of the ticketing team told us this morning that the new machines are expected to be much quicker than the old ones, which had reportedly been sluggish and caused customer service delays.

The representative described the upgraded booths as “instant”, explaining the speed would be quicker with a much smoother connection to the digital cloud.

The newly installed machines have a slicker design to previous iterations, with an updated instruction screen and payment options, but with a new additional screen, likely for digital public messages or advertisements.

The self-serving electronic kiosks are a shiny shade of dark blue, unlike their former grey counterparts.

According to a staff member who we spoke to today, the machines should definitely be operational by the end of this week.

(Visited 136 times, 1 visits today)
https://www.iambirmingham.co.uk/2022/06/08/ticket-chaos-new-street-station-ticket-machines-action-ahead-tech-upgrade/https://www.iambirmingham.co.uk/wp-content/uploads/2022/06/New-Street-Station-ticket-machines-June-2022-b-800x481.jpeghttps://www.iambirmingham.co.uk/wp-content/uploads/2022/06/New-Street-Station-ticket-machines-June-2022-b-300x180.jpeg2022-06-08T17:23:13+00:00Staff ReporterNewsTransportBirmingham New Street Station,booths,commuters,delays,digital,e-tickets,electronic,kiosks,New STreet,New Street Station,old machines,our of order,queues,self service,ticket,ticket machines,ticketing,Tickets,Train,train tickets,Trains,Transport,travel,upgradeSelf-service ticket machines are out of action at New Street Station in Birmingham, forcing throngs of customers to queue for tickets and causing some to miss trains and connections or be delayed on their journeys. To accommodate a refit of brand new ticket machines throughout the city's main station, older...Staff ReporterStaff Reporter[email protected]AdministratorI Am Birmingham
« REVIEW: Singin’ in the Rain – a night of Hollywood glamour in Birmingham
From the Maasai Mara to Birmingham – artist Raphael Mazzucco unveils new exhibition »