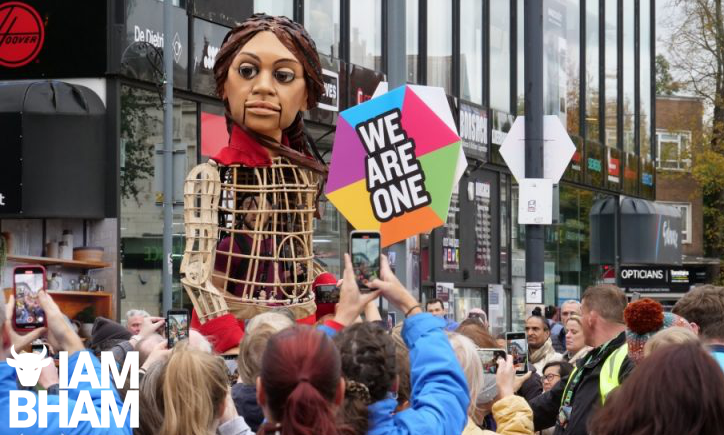 The puppet of Little Amal, the poignant and powerful symbol of refugees and international human rights, is due to make a grand public appearance in Birmingham this week.

The 11ft tall puppet will arrive on Thursday 23 June in Victoria Square for a walkabout which will commence around 11:30am.

Since her initial 8,000km journey from Syria, Little Amal, a 3.5 metre puppet of a 10-year-old Syrian girl refugee, has become an international symbol of human rights. She has come to represent the millions of refugee children including those who have been separated from their families.

One year on from leaving Syria and 5 weeks after her visit to Ukraine, she will mark World Refugee Week by visiting 11 towns and cities across England, including Birmingham, meeting old friends and making new ones.

Amal will be sharing a message of resilience and hope with anyone who has been forced to leave their homes.

In a free event, Little Amal will walk a route through the centre of Birmingham meeting ‘families’ of relations, friends and community groups. Each family group along the route will be posing for a special photo portrait featuring giant frames which will welcome Amal into each of their unique group photographs.

Birmingham photographer Pogus Caesar, who documented the Handsworth Riots in 1985, will be on hand to take portraits of the refugee families and community groups who will walk alongside Little Amal.

It takes three puppeteers to operate Little Amal, a stilt walker whose legs become Amal’s and who also animates her face, one puppeteer on each of her arms. There is a team of ten puppeteers, some from refugee backgrounds. The puppet is crafted from moulded cane and carbon fibre.

Little Amal represents the millions of refugee children separated from their families. Her urgent message to the world is “Don’t forget about us”.

This theatrical installation celebrates Birmingham’s diverse population and introduces Amal to everything ‘Brummie’.

The Birmingham Repertory Theatre (The REP) is producing Little Amal’s visit to the city with support from Active Arts and Birmingham City Council.

“Little Amal is not only an arresting and beautiful moment for the public to be a part of, but a rousing symbol of human rights that is so relevant in our world right now.

“We look forward to introducing Amal to the ‘families’ that make up our rich and vibrant city.”

Little Amal will walk from the Council House in Victoria Square and make her way towards Centenary Square. The event will end near the Commonwealth Countdown clock.

This public event, which is excepted to draw huge crowds, is open to all and requires no registration or tickets.