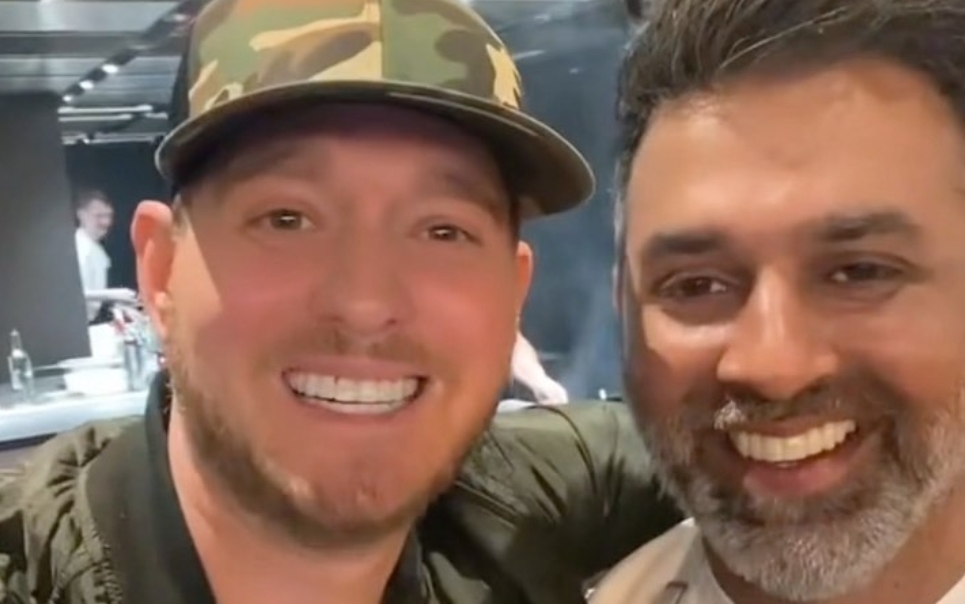 Legendary Canadian crooner Michael Bublé dined at Birmingham chef Aktar Islam’s Indian restaurant on Wednesday (29 June) and enjoyed the food so much that he ended up hugging and kissing the chef.

The superstar singer and his family booked out the entire Opheem restaurant in Summer Row to enjoy a night of delicious food at the Michelin Star eatery.

After iconic Hollywood stars Johnny Depp and Tom Cruise searching out the best curry houses in Birmingham city centre comes another world famous star in search of an Indian restaurant.

Las Vegas sensation Michael Bublé, 46, arrived in Birmingham ahead of his show at Warwick Castle to dine at his friend Aktar Islam’s restaurant.

Bublé met Islam – who hails from the Aston area of Birmingham – ten years ago when he ate at Islam’s first eatery.

The jazz and soul singer enjoyed the culinary experience so much that he brought back his entire family to sample Islam’s delicious recipes at Opheem.

Bublé shared a video of his visit on his Instagram page – which has over 2.9 million follwers – and said: “Tonight in Birmingham, my friend Aktar closed down one of the great restaurants in the world, called Opheem, and he’s closed it down just for me and my family, come and check this out!”

He added: “Reason one million seven hundred and 38 thousand I love the UK.”

Islam cooked up a feast for Bublé and his family, including children, and the food went down a treat with everyone cheering and applauding Islam and his staff.

After the seasonal menu of lamb and scallops, Bublé ordered the rare – and much sought-after – Alphonso mango for dessert.

This sweet and succulent mango is currently even more rare due to climate change which has led to a shortage at this year’s harvest.

Before leaving the restaurant, Bublé can be seen hugging Islam in the video clip and saying: “Ten years ago, I came to his first restaurant and fell in love.

“And here we are, years later and I’m in love again. Give me a kiss!”

Bublé’s video ends in a cute manner when he’s in bed with his wife Luisana,who’s pregnant with their fourth child, and jokingly says to her: “Sorry, Lu. Tonight I dream of Aktar!”

Speaking about his special world famous customer, Islam said: “It’s always lovely when old friends pop in and it was lovely to be able to introduce Michael and his family to Opheem as its his first time here.

“He’s been a great friend for over a decade and truly is one of the nicest, kindest most humble person that I’ve had the pleasure of meeting.

“I’m extremely happy that the entertainment business is returning and Michael’s tour is a very big part of the annual UK entertainment calendar.”