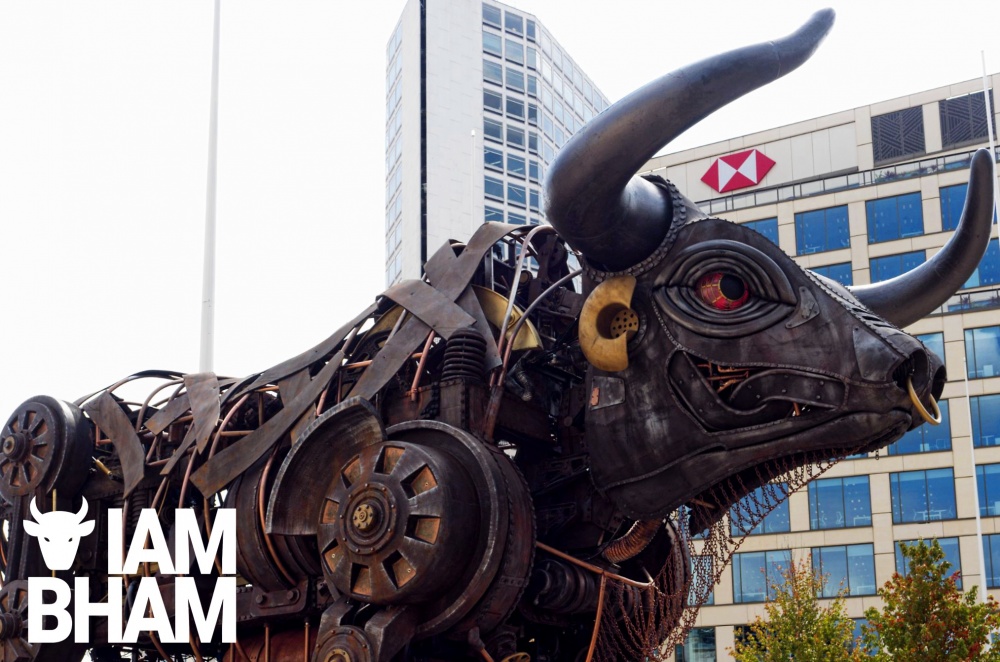 A petition has been launched to save the Birmingham 2022 bull from the scrapyard (Photo: Wali Taylor)

It appears that the celebrated and well-received bull, which made a dramatic appearance at the Birmingham Commonwealth Games 2022, is destined for the scrapheap once the sporting event comes to an end.

The animatronic bull was a massive hit with the audience, and proved to be a major highlight during the spectacular opening ceremony on Thursday night where it played a pivotal role in the story of Birmingham.

However, despite its popularity at the opening ceremony, and being a major draw for selfie-seeking visitors to the site of the bull’s current display site in Centenary Square, the show-stopping structure – a symbol of the city’s strength and endurance – will be taken apart and scrapped once the Commonwealth Games come to a close.

Artem, the special effects team behind the design and creation of the crowd-pleasing bull, said that due to the epic scale of the artwork there are storage and transport issues surrounding it.

Thus far, there are no official plans to exhibit the bull beyond the end of the games when it is expected to be dismantled from its current position outside The Hall of Memory in Broad Street and destroyed.

Bull creator Michael Dollar, from Scotland, revealed when the bull is due to be taken apart.

“On the 9th we will dismantle it. It is a little large to put anywhere really.”

Dollar also stated that while the huge 10m high bull was being created “it wouldn’t fit into our workshops” and a temporary structure had to be built to house it.

Mike Bushell, from Artem, added: “I suspect it will be taken apart, never to see the light again.”

A battle has started to save the bull with people taking to social media to voice their support to keep the iconic work of art.

An online petition has also been launched to try and save the bull from facing destruction.

Fans are hoping the bull can be saved and treasured for Brummies and tourists to enjoy just like the much-loved Bullring bull outside the Rotunda.

Not going to lie … I think if anyone tries to take away and dismantle the opening ceremony bull after the games, there will be a riot in Birmingham!! #CommonwealthGames2022 #bull #birminghambull #Birminghamcg22 pic.twitter.com/uXc8CIUThl

Chris Stafford, from Birmingham, hopes the bull can be saved as a “reminder” of the sacrifices made by ordinary Brummie and Black Country working-class families whose strength and legacy are rarely celebrated in public works of art.

Stafford believes the proud, and strong-looking, bull should be retained as a testament to the historical legacy of the city’s industrial workers.

Speaking to I Am Birmingham, Stafford said: “The bull should be left where it is in Centenary Square, or placed in one of the former industrial sites in the Midlands as a memorial to the hard work and contributions made by local people over the years.”

The plans for the bull to be carted off to “the knacker’s yard” is poignant considering how loyal workers, during the Industrial Revolution, were unjustly treated by employers. Strong and obedient workers – or African slaves in the New World – were cruelly discarded like carrion after years of toil and servitude because they had reached the end of their usefulness.

Birmingham-born photographer Paul Martin, who was thunderstruck by the powerful role played by the bull in the opening ceremony, reflected the shock felt by many at the news of the bull’s impending date with the wrecking ball.

Martin said: “Even if they don’t want it as public art, they should sell the bull to the highest bidder! I’ll bet plenty of big businesses would want it.

“Or send it off to the Yorkshire Sculpture Park as a last resort.

“But destroying it is just lazy and short-sighted.”

Lizzie Jones, a Small Heath resident who attended the opening ceremony, said the bull would serve as a sober reminder about the city’s involvement in the Slave Trade: “It would be such a terrible waste of money, and artistic talent, to simply dismantle the bull and throw it away.

“I would love to see the bull saved. It makes such a powerful statement about the Slave Trade.

“Schools could arrange trips into the city to show pupils this statue – just the way they do with the Queen Victoria statue in Victoria Square – and teach them about Birmingham’s links with the Slave Trade.

“Our city made the chains that took African people to work as slaves in America.”

Some fans of the bull have suggested displaying it in a permanent place, such as one of Birmingham’s public squares, because the well-received work of art has already proved to be a major hit with visitors to the city. They believe the bull will continue to be an extremely popular tourist attraction beyond the life of the Commonwealth Games.